A slate of local and national pro-life figures and performers are set to headline this year’s OneLife LA event, which will be held virtually due to COVID-19 restrictions.

This year’s theme, “The Joy of Life,” aims to unite communities in promoting the dignity of every human life, even in a time of social distancing, organizers said.

“Now more than ever, we are reminded that our lives are a gift from God to be treasured and respected,” said Archbishop José H. Gomez, who will be giving the keynote address. “OneLife LA is building a culture of care and sharing the joy of life when our world needs it most.” 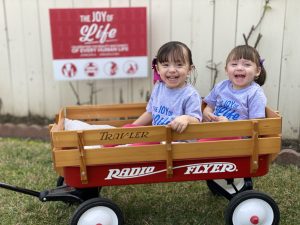 Among them is Karen Gaffney, an advocate for persons with disabilities and president of the Karen Gaffney Foundation. Gaffney made history in 2001, when she became the first person with Down syndrome to swim the English Channel.

Gloria Purvis is a public speaker and radio host. She is a leading Catholic voice on racial justice and the pro-life movement, and has participated in past OneLife LA celebrations. In a post on Twitter, she promised to bring “a surprise guest from my family” to the virtual event.

A husband-and-wife team from Philadelphia, Damon and Melanie Owens have spent years teaching Theology of the Body and Natural Family Planning courses. Damon is the founder of joytob, a teaching ministry that focuses on human sexuality and its fulfillment in various forms of vocation.

Noemi Amezcua, the “mother of a hundred kids,” is a foster parent and advocate in Los Angeles. She’s taken in more than 100 children, most with disabilities or difficult circumstances. Her adopted daughter, Jessica, died of cystic fibrosis in 2017. “There’s no point in allowing children to feel unloved,” she told Angelus in a 2019 interview, and her mission is to help other parents do the same.

Returning this year is Jess Echeverry, a motivational speaker and founder of SOFESA, a nonprofit that helps homeless and low-income families in Southern California. Echeverry was the recipient of last year’s OneLife LA grant. She has survived abuse, teen pregnancy, and suicide attempts.

Sarah Wilson, another Angeleno, is the executive director of Harvest Home, this year’s OneLife LA grant beneficiary. Harvest Home provides housing, support, and programs to pregnant women in need at their Venice facility. The funds raised during this year’s event will go towards their expansion project, aimed at opening a second home for pregnant women.

The virtual event will be streamed via OneLifeLA.org and facebook.com/lacatholics.

Following the presentation, Archbishop Gomez will celebrate the 26th annual Requiem for the Unborn Mass, which will be streamed live from the Cathedral of Our Lady of the Angels at 5 p.m. 175 candles will be lit in remembrance of the babies lost to abortion daily in Southern California.