Norwalk priest mourned after sudden passing: ‘He died doing what he loved’

After being brought into this world against the odds, losing his father at 8 years old, and surviving a battle with cancer, Father Adrian San Juan knew one thing for certain: that he would “rather be with the Lord.”

That attitude — and memories of the young priest’s zeal for Christ — are what is left to console grieving parishioners, relatives, and fellow priests stunned by the news of the 43-year-old’s sudden passing Saturday, Sept. 19, after collapsing at the start of a wedding at St. Linus Church in Norwalk, where he served as administrator.

“He passed away doing what he loved: celebrating the Eucharist,” said Rafael Alvarez, a St. Linus parishioner and seminarian at the Queen of Angels Center for Priestly Formation. “That was one of his most joyful moments.”

Alvarez was there assisting Father San Juan as he entered the parish’s canopied “outdoor church,” kissed the altar, and waited for the wedding party to process toward the altar. But a few moments later, something “didn’t feel right”: to Alvarez’s surprise, Father San Juan went to sit in the presider’s chair before falling to the ground.

Paramedics were called and attempted CPR on Father San Juan, who had suffered an apparent heart attack, before taking him to PIH Whittier Hospital while another priest at St. Linus, Father Marco Reyes, stepped in to continue the wedding.

Father San Juan was pronounced dead a short while later. A small group of family members were briefly allowed into the hospital, and a priest was able to give him the last rites.

As of Thursday, Sept. 24, funeral plans were still pending while the priest’s family awaited word from the county medical examiner on his official cause of death.

Despite the shock over the apparently healthy priest’s death, though, those who knew “Father Adrian” told Angelus they were comforted that his passing came before the altar, after a “second life” in which he lived his vocation to the fullest. 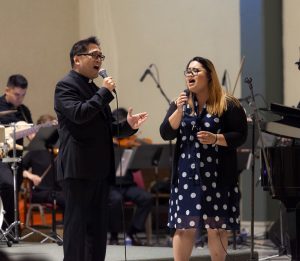 Father San Juan was born the last of six children in 1976 in Valenzuela, Philippines, outside the capital city of Manila. His birth was welcomed as a miraculous surprise, coming 11 years after the family’s next oldest child.

“Because of my mom’s advanced age, she had a very critical pregnancy [with Father San Juan],” said Victoria Siongco, the late priest’s sister. “She almost lost him.”

His mother, Gloria, spent the final months of the pregnancy confined to bed rest, begging God for her son’s life.

“We would see her every day praying with her arms outstretched, like a manifestation of a sacrifice, praying not to lose him,” recalled Siongco.

Both Father San Juan and his mother survived what his family says was a complicated childbirth. Eight years later, hard times struck the family again when his father, Carlos, succumbed to lung cancer.

As Siongco remembers it, her little brother showed signs of a vocation even before starting elementary school. He was fascinated by religious processions and was already singing in church by age 3.

By the time he had finished high school in 1994, he had broken up with his girlfriend at the time with the intention of entering the seminary.

Those closest to Father San Juan say his life was marked above all else by a life-and-death experience during that time: a testicular cancer diagnosis in 2002 a few months before his ordination to the diaconate.

Chemotherapy left him hairless, pale, and thin, but he vowed to follow through with his ordination to the diaconate. Family, friends, fellow seminarians, and even professors rallied behind him in prayer, and the cancer went into remission in 2003. He was ordained to the priesthood the following year. 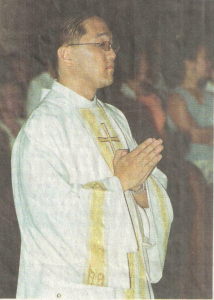 A scanned photo of Fr. Adrian San Juan at his priestly ordination in Manilla in 2004. (File photo/Phillipine Sunday Inquirer)

“This is my second life, no doubt,” Father San Juan told Manilla’s Phillipine Sunday Inquirer Magazine in an interview after his ordination in 2004. “I see myself in the hands of a loving Father. A second life is his revelation to me that I have a mission to do in His Name.”

In the same interview, the new priest shared that the cancer battle had given him more joy and a stronger faith.

“Life will not always be a journey of certainty, of controlling it the way we plan it,” he continued. “Doubts and so-called trials will come. But if we seek God in all things, then we learn that God’s love is everywhere.”

The priest credited his “second life” in particular to Divine Mercy, the Virgin Mary, and the miraculous intercession of St. Thérèse of Lisieux, to whom he had a fervent devotion for the rest of his life.

After spending six years ministering in parishes and schools in Manilla, Father San Juan transferred to the Archdiocese of Los Angeles in 2010 to be closer to his family. He served in several parishes, including St. John the Baptist in Baldwin Park, St. Madeleine in Pomona, and St. Peter Claver in Simi Valley before coming to St. Linus in 2019. He was officially incardinated as a priest of the archdiocese in 2015.

Among his brother priests, Father San Juan was known as a “holy priest who had a wonderful sense of humor, and always had a smile on his face,” according to Vicar for Clergy for the Archdiocese of Los Angeles Msgr. Jim Halley.

And during the annual Christmastime Simbang Gabi Mass at the Cathedral of Our Lady of the Angels, it was Father San Juan who was charged with leading his brother Filipino priests in singing in Tagalog after Communion.

“That’s how he endeared himself to the Filipino priests here,” recounted Bishop Aclan. “He was an excellent composer, pianist, and vocalist.” 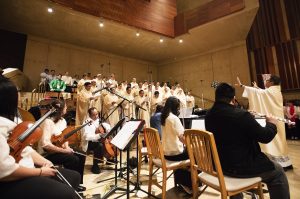 Father Adrian San Juan (far right) conducts a choir of Filipino priests of the Archdiocese of Los Angeles at the annual Simbang Gabi Mass at the Cathedral of Our Lady of the Angels in December 2016. (Victor Alemán)

One of those priests, Father Rizalino “Riz” Carranza, spent four years with him at St. Peter Claver Church in Simi Valley, where Father Carranza is pastor and Father San Juan served as associate pastor from 2015 to 2019. He said Father San Juan was the ultimate “people priest,” a gifted preacher whose enthusiasm while celebrating the Eucharist was infectious.

“He really appealed to a lot of people of different ages, from the older to the younger,” recalled Father Carranza.

In private, his former pastor says Father San Juan was a man of deep prayer. Walking past the door to his room, Father Carranza would sometimes catch a glimpse of Father San Juan on his knees with a lit candle burning.

“He always expressed that he would rather be with God,” said Father Carranza.

At St. Linus, where Father San Juan spent the last year of his life, parish business manager Ana Engquist said the impact from his short time there will be felt for a long time. 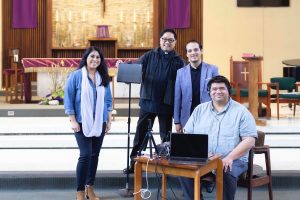 “He brought a strong spirituality to the parish,” said Engquist, including starting a Divine Mercy prayer group as he did at St. Peter Claver. “When he came on board he made it very clear we’re going to be a family, and that was kind of a strange concept to me. I was used to just having a working relationship with my pastors.”

Instead, Father San Juan told parish staff that they would be eating, praying, and even fighting together, as long as it was followed, of course, by forgiveness.

“His goal was to get us to heaven and to really live our faith, not just on Sundays, but day-to-day, to do the little things to get to heaven,” said Engquist.

Engquist and Alvarez agreed that the new administrator was a unifying presence for the parish over the last year.

“He was able to bring healing to the parish staff, and restored the ministries that were broken,” said Alvarez, whom Father San Juan guided and encouraged in his decision to enter the seminary this year.

During the recent months of the coronavirus (COVID-19) pandemic, Father San Juan took a “hands-on” approach in bringing the sacraments to his parishioners, whether through organizing a team to livestream Masses or building a dignified “outdoor church” in the parish parking lot with a stage and canopy when COVID-19 restrictions forced religious services to be held outdoors this summer. 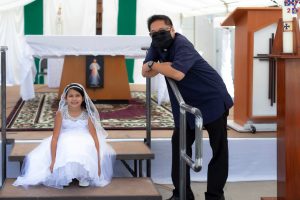 “He died doing what he loved to do, and I think that he came to our parish to heal us in a lot of ways. And he fulfilled that mission,” said Engquist.

Part of that mission was accompanying young people like Alvarez and the couple that he had prepared for marriage on that fateful day to embrace their vocations. Among them also was his own niece, whom Father San Juan was also helping prepare for marriage with her fiancé.

Siongco told Angelus that she and her sister “Fely” (both of whom live in nearby Walnut) will miss her brother's visits on his days off to eat together, plan vacations, and take 6,000-step walks to help them stay in shape.

Even in the face of losing their little brother, family chaplain, and travel companion, Siongco said her family is consoled by the outpouring on social media about the lives Father San Juan touched, evidence of the good fruit that his vocation bore.

“It’s an honor for Father Adrian to be summoned by the Lord,” said Siongco. “When our heavenly boss calls us, who should say no?"