New religious education head 'restless' to reach out to youth

A few days after starting her new job, Sister Rosalia Meza’s office at the Archdiocesan Catholic Center overlooking Wilshire Boulevard in Koreatown got a fresh green paint job. A few paintings depicting scenes from the Gospels were placed on a wall opposite a framed photo of a statue of the Virgin Mary from the Spanish island of Mallorca, where her religious order was founded.

Yet besides an empty bookcase, there isn’t much else in her fourth floor office. After all, she doesn’t plan to spend much time there.

“Me, Rosalia, I don’t perceive myself just being in an office, I will kill myself!” she chuckled from behind her desk. “That’s not me, and that’s not my vocation.”

But it is precisely her vocation that has led the 47-year-old Verbum Dei sister to LA’s ultimate Catholic office job: director of the Office of Religious Education (ORE) for the nation’s largest diocese, a post filled since 2015 by Father Chris Bazyouros, who was appointed administrator of St. John Chrysostom in Inglewood this year.

The department counts on 34 office employees but oversees religious education programs for the entire archdiocese, which this year saw more than 23,000 young people receive the sacrament of confirmation and nearly 40,000 children receive first Communion.

Rosalia Meza Moreno was born in Guadalajara, Mexico, to a Catholic family. She grew up living what she calls a “very normal life,” earning a degree in pedagogy at a Jesuit university and working as the supervisor of a software company’s education department, overseeing training personnel and procedures.

“I had everything,” she recalled. “Everything was given to me.”

The year was 1997. Meza’s boyfriend at the time wanted to get married. But something didn’t feel right.

“I was searching for something more, and I didn’t know what.”

Meza had plans to study for a Master’s degree in Canada. But a stay in San Francisco to study English led her to meet the Verbum Dei Missionary Fraternity (VDMF), a religious community founded in 1963 in Spain that her parents had come to know back in Mexico.

“I always say that it was God interrupting my life,” said Meza of the call to her vocation as a religious sister. “It was God approaching me, getting closer to me, and showing me who God was, and as well as the need of the people.”

Attending youth group meetings led by the community made her see that “God wasn’t something boring, or up there,” but someone “really close to us.” She recalled the ensuing process of discernment as something “beautiful,” in which God helped her leave behind a good life in exchange for a better one.

“We didn’t have cellphone, internet, or any of that — so I really did a clear cut in my life, from family, friends, boyfriend, everything!”

Meza’s studies and job experience prepared her well for her new calling. She has taught theology at her community’s institute, the Archdiocese of San Francisco, and Loyola Marymount University, while training the order’s novices, and forming lay catechists.

In 2017, she earned a doctorate in sacred theology from the Jesuit School of Theology at Berkeley. And since being elected two years ago, she has served as Verbum Dei’s regional provincial, a post she’ll serve in until at least next year, when her term is complete.

Most recently, she has served as the director of religious education at St. Anthony’s in Long Beach, where she will continue to live in community with her fellow Verbum Dei sisters.

Since arriving there in 2008, she’s seen the job not only as an opportunity to evangelize, but also to put her background in pedagogy to use in restructuring the parish’s religious education programs for children, teenagers, and adults.

“For me, and for us as a community, it was very important that besides the catechetical formation, the people could leave with a certainty of experience of God, because many of them don’t come back to church,” explained Meza, who oversaw the preparation of more than 700 children for first Communion and more than 350 teenagers for vonfirmation during her time at St. Anthony’s.

“But if they could leave the program having the certainty that God loves them, that’s fine — the objective is reached.” 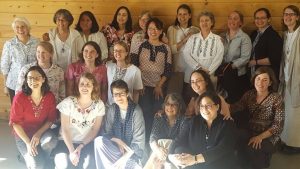 Sister Rosalia (top row, fourth from left) with most of the sisters of the Verbum Dei Missionary Fraternity’s U.S. province. (SISTER ROSALIA MEZA)

As if she hadn’t been busy enough lately, she was approached this spring to see if she’d consider leading the religious education department of the nation’s largest Catholic archdiocese.

“No way,” she remembered she answered. “I have a lot of work. I don’t have time for that.”

But they soon called again, asking if as provincial, she could offer any Verbum Dei Sisters to help the archdiocese. The answer was, again, “no.”

“Well, then, what about you?” she was asked.

Meza finally relented, figuring she’d give the interview process a try. She met with archdiocesan leadership including Archbishop José H. Gomez, who liked what he was hearing in their conversations about her ideas for the future of religious education in Los Angeles.

“He was transmitting to me the desire of helping the people have an encounter with Christ, and then making disciples of Christ. And that’s the core of my charism.”

Meza admitted that her first weeks on the job have been a little “overwhelming” with so many things to learn, people to meet, and events to plan. But she’s felt supported by the warm welcome from staff, and perceives an openness to working differently in the office.

Although the ORE oversees the religious education programs of the nearly 300 parishes of the archdiocese, it also coordinates events like the upcoming City of Saints teen conference held each summer.

On the global stage, the department is best known for organizing the annual Religious Education Congress in Anaheim. When asked how the event can stay “fresh” while bringing back attendees every year, Meza responded that she feels a certain “restlessness” to reach out to those hungry for both theological training and spiritual nourishment.

“I have the desire of reaching out to the younger generations, including millennials, so that they can find that the Church is home for them,” said Meza.

“How? I have no idea. I don’t think that I’m ready for the how. I just have the restlessness of reaching out to the younger generation according to their needs.”