In these times of exceptional uncertainty, parishioners of St. John Fisher Church in Rancho Palos Verdes will likely count their blessings they’re being ministered to by Thomas Park, a man who knows firsthand how quickly life can turn, no matter your plans, no matter your age.

From the time he and his family emigrated from South Korea to the U.S. when he was 10, Park knew he would be an engineer. He dreamed about it, worked toward it. Yes, there was that gnawing feeling he’d get about the priesthood, but, “I didn’t really seriously think about it because my desire, my dream was to be an engineer.”

By the time he reached his mid-40s, he assumed any thought of the priesthood was pointless. But, in 2007, it was nonetheless rekindled while reading “Divine Mercy in My Soul: The Diary of Sister Faustina Kowalska.”

“I read that and that just changed my life,” he said. “I just totally wanted to give myself after that. I was content with my life and all, but still I was ready to give that up and serve the Lord.”

Though he was ready to give up his previous life, Park still had the mind of an engineer, and he quickly crunched the numbers and decided on an outcome. 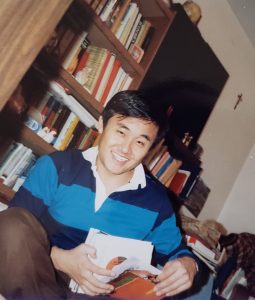 Thomas Park in the late 1980s, "relaxing at home listening to music after a busy day at work." (Submitted photo)

But, during a Divine Mercy pilgrimage to Europe in 2008, he had a chance conversation with the tour’s host, a priest who told Park, much to his amazement, that he, too, had been called later in life, taking his final vows in his mid-50s.

Thomas Park is now 58 — “soon to be 59” — but listening to him talk about his first assignment, the energy and excitement is obvious. While youth has its place, so do the experiences of a lifetime, experiences he believes can help parishioners deal with the “trials and dark times we’re going through.”

Asked what his message will be to his new congregation outside of “just looking forward to meeting with you all,” he makes clear he’s much more inclined to listen.

“I’m excited. I’m just in the moment, living all for God and letting him surprise me,” he said. “I’m looking forward to meeting the parishioners and pastor and working together.”

Still, if his journey has taught him anything he would like to share with others, whether they lead families or may be considering leading flocks, it is to always maintain a patient heart. Oh, and one other key element.

“Don’t give up hope,” he said. “We’re going through a lot of challenges and trials at the moment. The one thing for sure is that there’s always a hope and the hope is found in Jesus Christ.

“There is always something to learn, you may not know it right now, but after perhaps a few years later, perhaps 10 or 20 years later, like me, God will reveal that answer to you.”

Steve Lowery began his journalism career at the Los Angeles Times, and he has since written for The National, the Los Angeles Daily News, the Press-Telegram, New Times LA, the District, and the OC Weekly. He is the arts and culture editor for the Post, overseeing the Hi-lo. He has two grown children.