Manuel Ramos admitted to being a “little naive” when first entering the seminary, believing that those he would be sharing this journey with came to it armed with the innocence and certainty of “a community of altar servers.”

It was therefore somewhat of a relief for him to discover that his colleagues were far from any of that, that “the men that I was surrounded with were great men, but they experienced doubts, they experienced struggles and pressures, nonetheless.”

If Ramos didn’t have doubts growing up, he certainly could overwhelm himself with conflicting thoughts. Raised in San Pedro, a member of Holy Trinity Church, he said it was there that he first heard the call to a vocation, but “like many men, you have dreams of having a family, of having work, and so I went the other way.”

That other way led him to Bishop Montgomery High School and then UC Irvine, where he first majored in pre-med only to do a complete 180 and change his emphasis to film. As for the call that still came to him from time to time?

“Unfortunately, I kept running from my vocation.”

That is until 2000, when Father Edward Benioff at Holy Trinity encouraged him to take a more active role in his faith, and it was then that he discovered a joy in ministry. Before too long, he was a member of multiple ministries. The satisfaction of not just thinking about his faith but performing it “is what fueled my vocation,” he said. 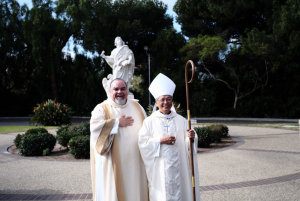 In 2009, during a drive to Tijuana, Mexico, to visit his grandmother, he heard “a distinct voice coming from deep inside of me saying, ‘It’s time.’ ”

This time, he listened and soon entered the seminary.

He found a welcoming community willing to offer whatever he needed, a shoulder to lean on, an ear to listen to help him break through all that had been holding him back.

“They were definitely there for me, you know, to help me to get up when I had fallen down. These seven years there were struggles, there were difficulties, there were health concerns that I had to go through, but it wasn’t a path that I was walking alone.”

His fellow seminarians’ kindness further confirmed to him that real faith must be acted upon and provided to whoever needs it, which, let’s face it, is everyone. He says he’ll emphasize this message of an active faith at his new parish, St. Joseph Church in Carpinteria.

“I think that’s the crux, getting involved, getting active, becoming a part of the parish and not just sitting passively waiting for the spirit to come to [you],” he said. “Jesus Christ is here to heal and to offer salvation and that’s something I want to echo. I want that to resonate from my ministry.”