There’s no need to tell Louie Reyes that one person, one priest, can change the course of someone’s life. He knows that. He’s lived it.

It happened while Reyes was attending UC Santa Barbara, a university well-known, as he said, as “a party school.” And Reyes admitted he took part in what might be described as a somewhat Augustinian existence.

“I just got sucked into that culture of party and craziness,” he said.

Reyes was still going to Mass at the university parish, St. Mark’s, but he did that more out of habit.

Born in Manila, Philippines, and brought to the United States by his parents at age 7, he grew up in Salinas and attended Mass every Sunday, but his spiritual life never really extended beyond the end of the weekend.

“I was never part of a youth group; faith was just kind of something on the side for me.” 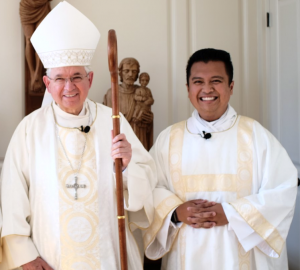 Louie Reyes with Archbishop José H. Gomez at the opening Mass of the academic year at St. John's Seminary in Camarillo on Sept. 19, 2019. (ADLA Vocations Office)

But it was at St. Mark’s that he met Father Tomas Ellis, who made an immediate impression on him.

“He took me under his wing,” he said. “I was like ‘Wow!’ Priests can actually be joyful. They can actually laugh and be serious at the same time and really down to earth. I was like, OK, this is a different side of the priesthood.”

Suddenly, the call that others had seen in him and that Reyes had contemplated as a younger man became the driving force in his life.

He joined a faith-sharing group called Catholic Isla Vista (Catholic IV) and started attending daily Mass. The pull in him became so strong that even when Father Ellis retired a few years later, he connected with his replacement, Father John Love, a man who, he said, “just really exuded what the priesthood is supposed to look like.”

Now that it is time for him to go out in the world as a priest himself, he wants to make sure that he can affect as many people as possible. Because of that Reyes, already fluent in Tagalog and English, has continued to study Spanish since his first parish assignment, St. Philip Neri Church in Lynwood, is overwhelmingly Latino.

“I ask that they continue to pray for me as I continue to learn,” he said. “They are going to have to be patient because my Spanish is going to need a lot of work. I know they’re going to help me with that.”

Though he may sound apprehensive about this third language, his voice belies someone who can’t wait to go on with his vocation, knowing full well that one person, one smile, one wing to find refuge and strength under, can mean all the difference in one person’s life.