Choosing a vocation is rarely easy, as many stories of deacons attest. It often takes a long period of time, trial and error, pull and pushback to finally convince someone that this is what they are called to do.

And, as Justin Ordoveza proves, it’s not easy even when, from an early age, you are already convinced that you are destined to become a priest. Even then, life can throw roadblocks in your way that last for years.

This is why he said that elemental to a vocation is “perseverance to follow God’s call, no matter what life throws at you. Because life will throw a lot at you.” 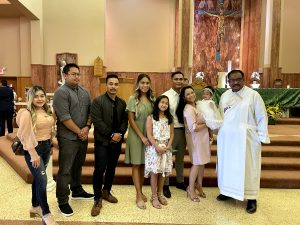 Ordoveza (far right) with parishioners at Our Lady of Refuge Church in Long Beach after performing his first baptism as a deacon.

A product of Catholic education — “I’m very proud of that fact” — Ordoveza was thinking about the priesthood while he was in middle school and high school.

His mother suggested he go to college first, but attending Southern Catholic College in Georgia, where he earned his bachelor’s in material engineering, simply reinforced his thinking.

“It was an amazing community of other young adults really engaged in their faith,” he said. “It was so invigorating.”

He was so moved that, while working as a tutor in Long Beach, he began meeting with a vocations counselor, telling his parents that he was going to a job interview. As an only child, which he says is a “hard thing to find in Catholic circles,” he was concerned that his parents might have mixed feelings on him following through with discernment. In fact, he was more than halfway through the process before his mother asked, “Justin, are you thinking about becoming a priest?”

He admitted he was and said now, years later, his parents remain “some of my biggest fans.”

But even when he went through the hard business of talking to his parents about his vocation, that didn’t settle his struggle. Soon after, he was struck with an illness that required him to be hospitalized and ultimately took two years away from discernment. Then his mother had a stroke and he took another two years off to help nurse her back to health.

It was during this time that he wondered if he had gotten the right message from God.

“I was in the hospital for months, wondering where was God calling me, what was going on,” he said. “Finally, when everything was resolved, I said, ‘God, whatever it is, your will be done.’ ” 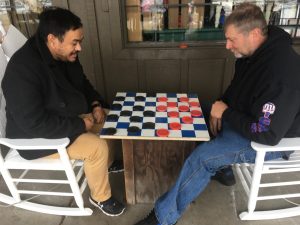 Ordoveza (left) enjoying a match of checkers with his uncle.

Once he returned to the seminary, he said he was stronger for those struggles, and for learning to put his will in God’s hands alone.

As he begins the next chapter of his life, he tells others to understand that it can be a “circuitous route of faith, especially with a vocation. God calls you, something pulls you even if events get in the way. Once I arrived there, there was a comfort level, this is where God’s calling me to be.”

He said that as a priest, he looks forward to “journeying with people, being there at the bookends of life: their greatest moments and their worst moments to help them journey with Christ.”

As for his own journey, he said he’s learned that “first, you must be brave. A vocation can be a scary concept. But once you let God be there with you, he will supply you the grace. If you persevere with the faith God gives you, it makes a whole lot of difference.”