While Justin Oh, like so many other new priests, looks forward to celebrating Mass, offering the sacrament of reconciliation and the other daily duties of a priest, what really excites him is the “journey” he will take with his parishioners.

“I look forward to when I’m doing the baptism for a couple and it’s a couple that I married,” he said. “You know, and I’m there for their kid’s first Communion and I accompany them on this journey, the whole process.”

Although Oh sees his own journey to the priesthood as “rather ordinary,” nothing “dramatic, like St. Paul,” it has had its share of unexpected turns, delays and, yes, drama.

Born to South Korean immigrants, raised in Cerritos, Oh’s Catholic life was typical, if a bit delayed: baptized at the age of 5, first Communion while in high school, confirmation while in college. It was during college that he heard God’s call to become a priest, a call he heard “clear as day” the day after completing a 54-day novena.

At first, it was a call he rejected completely.

“Of course, my first reaction was, ‘No way,’ actually with some inappropriate words,” Oh said. “I said ‘No, God. I think you and [the] Blessed Mother, I think you’re just tripping.” 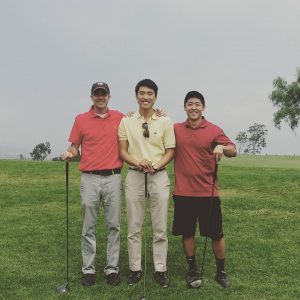 He still attended daily Mass and remained involved in youth ministry, but would not listen to God’s call. This lasted for five years, years he admitted, he knew, “deep down inside,” he wasn’t living the life that was meant for him, the life he encouraged others to pursue.

“I would work with a lot of kids and talk to them about God’s love or God’s will for us and the purpose of our lives, and I would always encourage them to stay open to the will of God because he’s the one who made us and who probably knows best,” he said.

“And yet [in my life] I was saying, ‘Well, God, that’s great that you’re calling me to this, but I think I know what’s best for me,’ placing my own will above the will of the Lord.”

But, as we know, when it comes to life’s journey, the Lord can be as relentless as the person in the passenger seat telling the driver they really need to pull over and ask for directions. For Oh, the map was laid out by a priest who helped him discern, and turn that no into a yes.

Today, he can’t wait to get started.