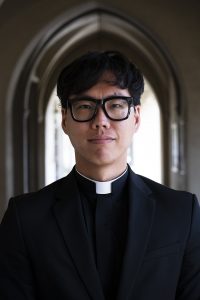 Jihoon Kim has had a personal relationship with Christ ever since he heeded the call, at age 7, to become a Catholic. He did that completely on his own in South Korea — he’s fond of saying, “I converted myself” — and, over the years, has followed other directives that included converting his family and becoming a catechist.

Still, when he heard the Lord calling him to the priesthood, Kim figured a mistake had been made.

At the time, Kim was focused on making it in the music industry, and his relationship with God had diminished to the point that he was praying daily for the Lord to “make me rich and famous.” 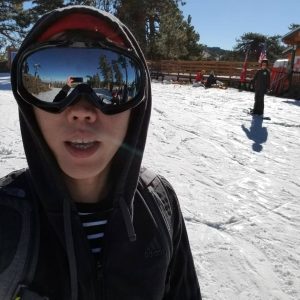 Kim takes a selfie during a ski trip.

Incredibly, Kim assumed the miscommunication with the Almighty had something to do with him being “too involved in the Church,” prompting him to take a self-imposed break. A few months later, though, while attending Mass, he found himself moved by visiting priest Father Steve Davoren, though he wasn’t quite sure why.

He said he already knows that one of his missions as a new priest will be to bear witness to the very real presence of God in our daily lives. For those who struggle to hear the Lord, he will tell them there are two ways you can always find him: the Eucharist and the Blessed Sacrament.

It’s a fact that never ceases to amaze or move him.

“When I go to Holy Hour, I see the Blessed Sacrament and I’m like ‘Lord, you are here,’ ” he said. “And sometimes I wonder if this is maybe how the apostles felt when Jesus was resurrected? One time I was leading the Holy Hour at the seminary and I was bringing the Blessed Sacrament from the chapel to a place outdoors and I was holding him in my hands. I was just filled with this sense of awe. I’m holding the King of the universe in my hand. It was just … oh, I just got goosebumps.” 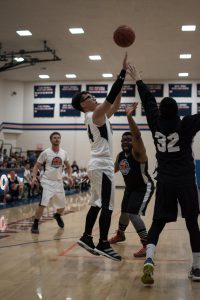 His obvious joy at being able to access the Lord at any time is obvious, and comforting, which is why it makes him sad that many other Catholics seem unaware how close Christ is to them. He has spoken to fellow Catholics who tell him they believe that Jesus is only symbolically present in the Eucharist or Blessed Sacrament, which has convinced him of what he must do once ordained.

“I’m like, OK, so there’s a great need, we need to really catechize people to see the transcendental beauty in the Eucharist,” Kim said. “So that will be one of my missions as a priest, to really help people to fall in greater love for the Eucharist and see how the Eucharist changes lives and lead them to the Eucharist to be the source of their life.”