Home parish: Cathedral of Our Lady of the Angels, Los Angeles

Looking back, Guillermo “Memo” Alonso is amazed at how many times and how many ways God placed the right people at the right time and place to help him along on his journey to the priesthood.

First, of course, were his parents, both from Mexico, and four older siblings, whose lives revolved around the Church. Sundays had a regular routine: He would wake up to music, take part with his entire family in cleaning the house, and then go to Mass all together before a family outing afterward. “Sundays were the days that I looked forward to.”

“Faith was a big part of our family,” he recalled. 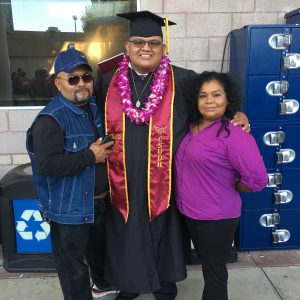 Alonso with his parents at his 2017 graduation from Cal State Dominguez Hills during his time in formation at the Juan Diego House in Gardena.

At 26, Alonso is the youngest priest to be ordained for the Archdiocese of Los Angeles in five years. While it’s difficult for Alonso to pinpoint a moment when he first heard the call to the priesthood, he credited a few factors in his upbringing. One was the joy that he saw parish priests serve with. Another was growing up in a tough area like Boyle Heights, which “imprinted in me this desire to want to help others, help the situation in my community. Sharing the faith was a powerful resource; sharing the faith was something I wanted to do.”

Of course, there were other things to take care of. Like high school.

He attended Cathedral High School, where he played football as a defensive end but was also around other like-minded young men considering the priesthood. He observed and spoke to other priests, including Cardinal Roger Mahony, a regular at home football games (the emeritus archbishop built up a special connection to the school when he helped save it from closing in the 1980s).

And each step of the way, at times he found people to guide him, listen to him, encourage him, and temper his enthusiasm.

“I felt this outburst of love,” he said. “I felt God was placing more and more mentors for me along the way.” 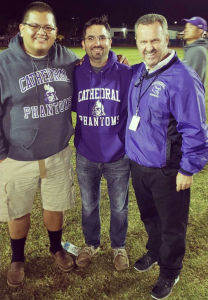 Those mentors include Msgr. Kevin Kostelnik and Father Brian Castaneda, who both served at the Cathedral of Our Lady of the Angels while he was discerning his vocation, Cathedral High alumnus Father Juan Ochoa, and the Lasallian Brothers at Cathedral High.

And he needed them. Though he recalled being happy when he entered St. John Seminary in Camarillo, he found the transition difficult, in part because Camarillo seemed very different from Boyle Heights.

“When I first came to St. John’s, I was struggling with the environment,” he said. “My whole world was upside down and I was having a hard time adapting.”

It was at this time that Cori Marasco, the principal of Santa Clara High School in Oxnard, reached out and asked him to get involved with students, especially the school’s football team. It helped his adjustment tremendously and, the following year when he was assigned a field education ministry, he was pleased to discover that it was Santa Clara.

“It showed me that God wanted me to be even more involved,” he said. “I took up campus ministry, was teaching religion on Thursdays. It worked out beautifully. The beauty is in how God works, placing the right people in my life every time I have needed them: confirmation sponsors, people who I can be myself to.” 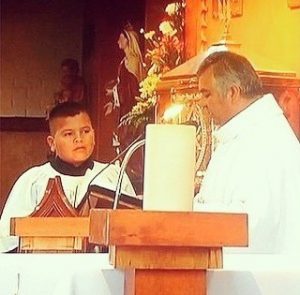 Alonso as a young altar server.

All of it, he said, has led him to trust God even more. For anyone seeking a religious life, he suggested letting go “of those expectations of what we think our ministry should be about. Simply allow God to mold us and allow this formation process to reveal itself in time. Be open to this, be open to the surprises God can reveal to us along the way.”