Daniel Lopez has to laugh when asked about God calling him to the priesthood. That’s because he’s heard the call so many times. Like, a lot.

Of course, being called was the last thing Lopez, 31, would have considered growing up. Though he grew up in a very loving family, with five older sisters and brothers, religion was not really part of his life. He wasn’t baptized, didn’t attend Mass, and really didn’t think about it.

That is until, while a sophomore at Los Altos High School, two of his classmates were killed suddenly. “That left a big question in my life — what’s the point of life? What are we doing here? Where am I going?”

Soon after, his father was diagnosed with terminal cancer. He died months later, using his last interaction with Daniel to give his son his rosary beads. “I was just trying to figure out the answers to life,” he recalled. 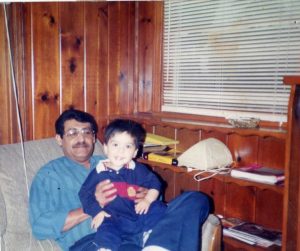 “I remember coming home from football practice and seeing the rosary on my desk. I just found so much consolation in it,” he said. “I found a prayer book, learned how to pray the rosary and learned about the Faith.”

For two years he prayed the sorrowful mysteries of the rosary every day. Looking back, “it consoled me,” he said.

But it didn’t necessarily give him peace. He admitted to being very confused during this time, as well as angry.

“I would get so frustrated with God, sometimes I wanted to rip that rosary apart.”

Instead, he felt compelled to attend Mass for the first time at the end of his senior year, feeling awkward because he had no idea of “what to do, what were the prayers.” Still, something told him to stick with it. “I knew not to receive Communion, so I was just sitting in the back.”

A few friends from high school got him involved in youth ministry, and eventually he joined the adult RCIA. It all brought him such joy and fulfillment, but still he felt like something was missing.

So, while sitting in church one day, he asked God, What do you want me to do?

Still resistant, he asked God to work through other people. In short order, he was approached by a woman at a midday Mass who told him blankly, “You’re going to be a priest,” followed by a priest who asked if he ever considered a vocation, followed by a RCIA counselor who told him he’d always assumed Daniel would become a priest.

“This was like the cock crowing three times,” he said with a laugh. “This was the truth, this was substance.”

Lopez (second from left) with fellow seminarians during a visit to Lambeau Field, home of the NFL's Green Bay Packers.

He is the first to admit that as a Christian, he is a work in progress, and that he aspires to “continue to love as God loves” and “to wrestle with that, as well.”

As a priest, he looks forward to helping people share the same “intimacy with the Lord” that he has experienced since his conversion.

“God has called you to be a saint, and he really means it. He wants you to reach sanctity, and it begins in the now.”