It’s not surprising to learn that Ramon Reyes first felt a call to the priesthood while growing up in the Church. The Church played a central role in his family: His mother made sure that, even though he attended public school, he attended Sunday Mass and weekly catechism classes. His two older sisters worked at the parish. It was all around him.

Perhaps surprising, then, is that it wasn’t necessarily the parish priest whom he cites as the greatest example in helping him discover a vocation to the priesthood. Rather, it was the people the priest served.

“My call came from that, the examples of the people who came to church; God was the main priority in their lives,” he recalled. 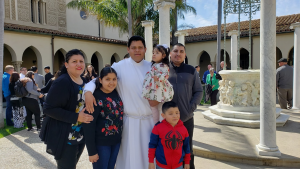 Reyes with his sister and her family after the rite of institution of lector at St. John's Seminary.

Growing up in Los Angeles (in what he calls “LA LA,” close to Mid-City), Reyes said that he was impressed by parishioners who dealt with hard times, illness, and other sufferings with faith. They were experiences he would never forget.

“They still had this bright sense of their life — God was central to that,” he said. “He called them, to their families, to everyone in society. No matter what they had to deal with, God was their first priority. At 14, 15 years of age, you look at that, you want something like that, something as stable, as defined as faith. I saw that faith in them, I wanted that, I needed that.”

It drove him to become more active in his church, joining youth groups, finding different ways to serve. That, in turn, has led to a deeper understanding of “my call of being holy, understanding my call came from the service of the people.

“I think I was 19 years old when I told my sister, ‘I want to become a priest,’ ” he recalled. She was skeptical, he said, but he knew “this is the only way that God’s calling me to fulfill my life.”

His spiritual director encouraged him to go to college first, where Reyes studied business administration. But after he graduated, he knew it was the right time to “take the next step.”

Now that he stands at the threshold of beginning that service as a priest, Reyes said he looks forward in a special way to being of service as a minister of the sacrament of reconciliation. Confession can seem mysterious, perhaps scary to some, and so he also sees it as his responsibility to make sure his community “understands what it is.

“It is the merciful love of God and through [reconciliation] we are made better able to participate in God’s love for us,” he said.

“That’s the biggest gift given to me, to give comfort as a representative of God in that moment because the absolution is from God, God is there and will forgive whatever you’ve done. With the light of God, any darkness in our heart can be overcome.” 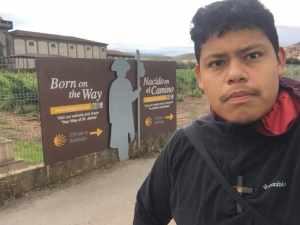 Reyes at a pilgrim stop along the Camino de Santiago in Spain.

For anyone with questions about God’s will for their future, Reyes advised putting him at the center of your life’s map, especially if considering a vocation.

“If you’re contemplating a vocation, a consecrated life, I would tell someone to get involved in their parish, to seek out clergy and religious figures in your life to give you advice,” he said.

“But to ultimately understand your heart and to see how it is moving toward this call, I would invite them to take a deep dive into the deep pool of God’s mercy. He’ll show you the way. If he wants you there, he’ll put you there.”