American Martyrs Catholic Church in Manhattan Beach on Saturday, Nov. 13, drew more than 500 volunteers to assemble and package about 120,000 dry meals that will be shipped to families in need in Guatemala.

The food-assembling event was facilitated by Cross Catholic Outreach, a Florida-based nonprofit that partners with parishes, clergy, and lay organizations around the world to provide humanitarian relief to the poor in more than 30 countries.

The first event of its kind at American Martyrs, participants saw it as a way to stay connected to the communities they have helped in Guatemala over the last four years through a partnership with Cross Catholic — due to not being able to travel there since the start of the COVID-19 pandemic since early 2020.

“It was an opportunity to put yourself in the background and put the poor right in front and ask, ‘How do we serve?’ ” said American Martyrs pastor Msgr. John Barry, who has gone on outreach missions with parishioners to Guatemala several times. 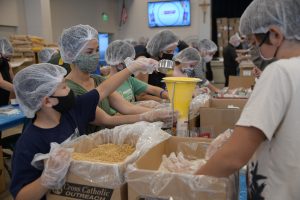 Sealed packages of rice, beans, dehydrated vegetables, soy protein, and vitamins were put together in teams of 10 to 12 volunteers at a dozen assembly line tables during four shifts to cover the eight-hour process at the parish’s O’Donnell Hall.

Each package provides six meals. More than 50 packages fit into a box, and the stacked boxes filled more than 12 pallets at the end of the day. They will be taken by truck to the Cross Catholic Outreach facilities and added to shipping containers to be expedited from Miami to Guatemala.

Once cleared through customs, the boxes go to Cross Catholic Outreach partners and delivered to the dioceses in Santa Rosa de Lima, where American Martyrs’ ministry groups have done work and visits.

The parish raised $40,000 in donations to pay for the 120,000 meals. Donors and participants included groups from the Knights of Columbus, USC, UCLA, Loyola High School, Amigos, Sandpipers, and the Girl and Boy Scouts.

Cross Catholic Outreach senior director Sandi Pino, who flew to Los Angeles for the event, said her organization holds about two such parish projects each month, but that American Martyrs’ debut had gone “beyond our expectations.”

“We’re not just privileged to be here, but it is a privilege to serve the poor in this way,” she told Angelus. “God gives us the strength and the resources and we’re honored to help.”

Among the volunteers was the 84-year-old Msgr. Barry, donning a hairnet, gloves, mask, and a black clergy shirt dusted with white soy powder. He said he was so impressed with the turnout and its mission that the parish would hold another Cross Catholic Outreach meal assembling event at the parish set for Jan. 8, 2022.

Cross Catholic Outreach, founded in 2001, has given more than $3 billion in aid to help the poor in more than three dozen developing countries.