Love in the time of COVID-19

When Amanda Valenzuela and Stephen Osborn became engaged last November, they planned to marry at the newly renovated St. Lawrence Martyr Church in Redondo Beach. “It is a breathtaking church,” Amanda said. “There is no church more beautiful than that one.”

But, when Gov. Gavin Newsom announced the coronavirus (COVID-19) closures in March that included churches, Amanda and Stephen started getting nervous. “We hoped everything would be resolved by summer, so I just kept praying and trusting God,” she said. Months passed, and Valenzuela and Osborn found themselves doing their Engagement Encounter on Zoom with dozens of other couples.

Meanwhile, Msgr. Paul Dotson, St. Lawrence Martyr’s pastor, was busy creating a backup plan on their behalf. He scouted the perfect outdoor spot behind the parish center, which had a shade tree, flowers, and a cross. He was ready for an outdoor wedding if that became their only option. 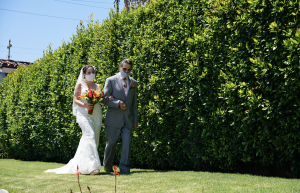 When the governor ordered the second shutdown in mid-July, the couple knew their July 25 wedding would be very different from what they had imagined.

“Stephen and I have known each other for 17 years. We didn’t care if we had to wear a mask or not — we were going to get married,” Valenzuela said. “Nothing should stop you from marrying the one you love.”

On Saturday, July 25, in the presence of some 50 guests seated at a social distance, Msgr. Dotson presided at the outdoor ceremony for the couple. When the time came to exchange vows, Msgr. Dotson allowed them to remove their masks. 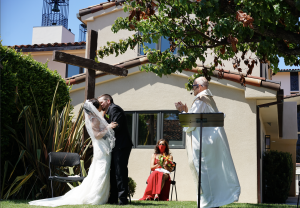 Amanda Valenzuela and Stephen Osborn share their first kiss as husband and wife at their July 25 outdoor wedding. (Jessica Smith)

Just two days later, Valenzuela started her first day as a registered nurse at St. Bernardine Medical Center in San Bernardino. Her assignment? “The unit for COVID-positive patients,” she said.

Valenzuela, however, was unphased. “If you would have told me eight months ago that I would be getting married outside wearing a face mask, then two days later caring for patients in the middle of a pandemic, I would have said you were crazy,” she said, laughing.

“But I feel fulfilled in this journey. God keeps me going, and he has given me the gift of being part of the solution. I see everything that has happened as a blessing. I’m very grateful for it.”