Local cemetery workers find a mission among the dead

With its white stucco exterior, red tile roof, and expansive green lawns behind it, the entrance building of All Souls Cemetery and Mortuary in Long Beach might easily be mistaken for a golf course clubhouse.

After all, a golf cart was grounds supervisor David Morales’ mode of transportation for taking a ride around the cemetery’s 47 acres on a recent September morning.

“There’s a sacredness about working here,” observed Morales. “It’s like an honor and ministry. I feel like I’m serving my community, serving the families. It’s not like a regular job — 100 percent.”

Helping families bury a relative is part of the 48-year-old’s job description. He tries not to stick out while standing in the back during graveside services. But his work clothes, a blue shirt with his name stitched on the front and darker pants, usually give him away.

When it’s over, he or another worker climbs up on a yellow backhoe to cover the casket with dirt unearthed earlier and then packs it back down. When he steps down from the vehicle, he sometimes gets a chance to console a lingering member of the family. 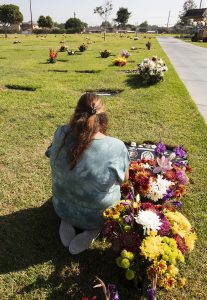 A woman prays at her son's grave at All Souls Cemetery. (Victor Alemán)

“It’s not like digging a hole, right?” Morales said as he steered the golf cart with one hand while motioning with the other. “No, to me it’s very important to be respectful. I try to encourage my coworkers to be the same, because we’re seeing a family going through the death of their mom or dad, son or daughter. I want to give the family 100 percent when they do the interment.”

Having to regularly confront the reality of death for a living has given the 48-year-old a special perspective on life.

“I mean, when God calls you, you’ve done your mission here on earth,” he said. “It can be for 80 years, 18 years or six months. But everyone has a mission. I’m here to tell the families, ‘You can go in peace. Your family member, he’s resting in peace, in the right place, the right way.’ ”

He waved to the driver of a backhoe coming back from scooping out a grave. Later, on the far side of the grassy grounds with the visitor, the golf cart stopped to check out private family plots. A row of them have cinder-block walls on three sides with a wrought-iron gate in front.

Morales, whose own family belongs to St. Philip Neri Church in Lynwood, said he feels the same way about respecting grieving families when he’s cutting the grass, keeping up the gardens, or trimming flat-lying markers.

But the main task he does is digging graves, 4 feet down for a single interment, 7 1/2 for a double. The standard width is 40 inches for both, however, because with a two-body internment, one is stacked on the other. Depending on the soil, it usually takes a team 30 to 45 minutes to dig a grave.

“You see life different,” the grounds supervisor mused later, after the ride. “That’s why I don’t change my job for nothing. Every day it’s different — different cases, different cultures. You see how the families are going through these bad moments, so you try to do the best job you can because it’s a ministry.

“Because my work is connected to my faith,” he added. “It’s very important for me and my family.”

Kristi Sault worked for a law firm and a bank, but didn’t feel like she was helping others in any significant way.

Eventually, she realized that helping people during the hardest time of their lives — dealing with the death of a loved one — was one sure way to change that. What better place for her to really help people? The thought led her to enroll in a local community college mortuary science program.

“Once I got on the path, I knew where I belonged,” she recalled. 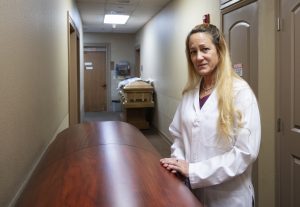 As the embalmer and director of All Souls Mortuary “care center,” the place where bodies are brought and prepared, Sault also sees her role as a ministry.

“I feel strongly about that, and that’s how I run the care center. I believe it’s giving them to God in the best light that you can,” she said.

“Everything from birth to death is transition to eternity. So everything being handled and honored is imperative for a decedent.”

Struggling to find the right words, she continued, “Everything about them — the life they lived — I mean, it’s way bigger than I am. It really is.”

Specifically, Sault’s job entails embalming bodies for burial, a role that required a two-year internship before she could get an embalmer’s license.

The first year was at a small mortuary in Covina. She met with families as an arrangement counselor, acted as a funeral director and did many other jobs in the field. Sault said she loved them all, but it was during her second intern year at All Souls that she settled on the area she wanted to specialize in.

“It’s a very fragile balance in embalming,” Sault pointed out. “Every decedent is different. And high levels of medications can affect the embalming process. Also different types of chemotherapy. And if they had liver failure or jaundice, it’s difficult to embalm. With more chemicals in the body, they can have different consequences with reactions during the process.”

At times, the four embalmers on staff at All Souls also have to act as detectives. They often don’t know the exact cause of death or the medications and medical procedures associated with the deceased persons leading up to their deaths.

“But with experience, you can tell what a person died of just by looking at him, generally,” Sault said. “Not all cases. But we always have to determine what type of chemicals we’re going to use. So we’re always judging the possible cause of death so we can formulate our chemicals.

“After a while,” she added, “you get really good at assessing.”

Embalming is surgical. Blood and other bodily fluids are removed to be replaced with formaldehyde-based chemical solutions. If the body has minimal complications, the whole embalming process takes about two hours.

But for those who died from different traumas, like car accidents, gunshots, and drowning, it can be much longer, ranging anywhere from five hours to days.

Often, accidental deaths bring up the question of a public or private viewing.

When a body comes in with severe trauma, workers at the care center do a head-to-toe assessment of its condition. A report is written up for the funeral counselor before he or she meets with the family. Sometimes it reads, “Viewing not recommended.” But if the family is adamant about seeing the deceased one last time, they must sign a waiver.

“We do everything we can to try to make them look the best we can,” she said.

“Sometimes we’ll just have the hands showing. If there’s nothing we can do, the family can come in and hold their hand. What I recommend and tell counselors is that perhaps you have one chosen family member to go in and see them first. And they make the determination whether the rest of the family should view.”

Sault has been at All Souls since 2001, and said she has no plans of changing careers. “It’s very rewarding,” said the embalmer and manager. “And I’m really glad that I do what I do.”

“My job is to try to make what’s probably your worst day in life the easiest,” said Sunny Smith, an at-need funeral counselor at All Souls. “That’s how I look at it, because I don’t want anyone to feel like I’m just business. I want you to know that I care about you, and I care about who you just lost. Once I gain that relationship, everything just flows. And, really, it’s honestly day by day, case by case.” 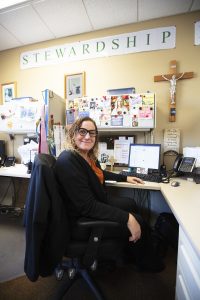 The counselor usually meets with three or four families every workday, sometimes five during busy periods. She makes all the arrangements, including going over pricing, selecting the casket or urn, designing the headstone, as well as preparation for interment. A lot of her time is spent just listening to families share memories about their dead relative.

“You connect with these people, and they let you into their lives, and you cherish it,” Smith said. “I know this was one of the worst days in their life. I know that, and I want to make them laugh if I can. That’s my way to help them get through it. For me — without sounding silly — I do think that God has given me the gift of empathy and humor. I don’t know, but it seems to work.”

Not all the time, however. A baby’s or child’s death can be especially devastating to a family, with the mother or father simply shutting down, not wanting to talk to anybody.

Gang funerals can be especially hard to break through to parents, who are grieving and angry at the same time. Smith said part of the job is making the family understand that she’s not judging them for their tattoos, lack of money, or limited English. In short, gaining their trust.

Like the other workers Angelus News spoke to, Smith believes there’s a fundamental difference between Catholic cemeteries and secular ones.

“There’s a sacred, spiritual aspect that exists, and people know that,” she said. “They feel more comfortable when the place involves their faith. And you don’t even have to be Catholic. You just have to have a Catholic connection like a husband or wife. We would never separate them.

“Before I walk into a room and know it’s a really tragic case like a child, I pray to have the right words to say,” she added.

“And it’s intimidating to walk into a room like that. Here I am, a stranger. And I’m going to start charging them for this and that, which we have to do, but you can do it in a certain way. I’m able to absorb their emotion. That’s the empathy part, which is wonderful sometimes and horrible other times.”

Smith emphasized that the most fundamental part of her job is praying.

“I’m constantly praying because I need faith and strength to get me through every day. And I’m always praying for the families. Always. ‘Jesus, take care of the mom whose baby died. She’s not making it. She needs you.’ I’ll say that in my head, and I’ve seen it work.”

Saint of the day: Rita of Cascia