Catholics across Southern California voiced prayers for peace to meet the might of an advancing Russian army across the world.

And nowhere were the pleas more urgent this week than at a small Ukrainian Catholic church in East Hollywood, filled with parishioners Sunday to share a message by Archbishop José H. Gomez.

They came, sons and daughters of the beleaguered eastern European nation, to hear his letter of hope — both to condemn the Russian invasion of Ukraine and to offer prayers for the local Ukrainian community and to their families back home. 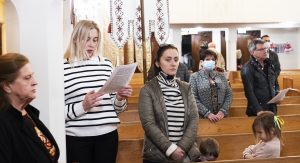 Nativity of Blessed Virgin Mary has been the home parish for generations of Ukrainian Angelenos since 1947. (Victor Alemán)

“My heart is with all of you in this time of sorrow and uncertainty,” wrote Archbishop Gomez in a letter read at the 10 a.m. Mass at Nativity of Blessed Virgin Mary Ukrainian Catholic Church by Archbishop Emeritus Cardinal Roger Mahony.

Archbishop Gomez assured parishioners that “your Roman Catholic brothers and sisters in the Archdiocese of Los Angeles will always be near to you in solidarity and prayer. We are praying for a swift end to the evil of this war.”

The invasion by the world’s largest nation into its former Soviet satellite four days earlier had sent shock waves through the Ukrainian-American community. Demonstrators at gatherings across Los Angeles over the past week rallied to decry the Russian attack. They demanded government action to force a halt to war. And they asked for prayers for peace.

“I still get goosebumps,” said Ukrainian-born Father Ihor Koshyk, pastor of the Nativity of Blessed Virgin Mary Ukrainian Catholic Church, before a Feb. 24 prayer vigil hours after the first incursion of Russian troops. “I can’t believe this is happening to my home country. My family: they’re scared. They don’t know what’s going to happen tomorrow. 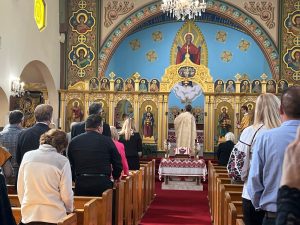 The Roman Catholic Church immediately condemned the Russian invasion, which at the latest count had killed 200 Ukrainians, wounded hundreds more, and forced 368,000 people to flee into neighboring European countries.

Pope Francis made a heartfelt appeal for peace in Ukraine, saying the threat of war caused “great pain in my heart.”

The pontiff appealed “to those with political responsibility to examine their consciences seriously before God, who is the God of peace and not of war,” and designated Ash Wednesday, on March 2, as a day of fasting and peace.

In an unprecedented departure from diplomatic protocol, Pope Francis went to the Russian embassy to the Holy See on Friday to relay his concern over Russia’s invasion of Ukraine. He also called the head of the Ukrainian Catholic Church, Archbishop Sviatoslav Shevchuk, saying “I will do everything I can” to help. 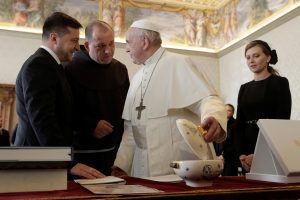 A day later, he called Ukraine President Volodymyr Zelenskyy to express his “sorrow” over the worsening war.

On Sunday, Pope Francis made an impassioned call for humanitarian corridors to help refugees leave Ukraine. He said those who make war should not be deluded into thinking that God is on their side.

“Those who make war forget humanity. It does not come from the people,” he said from the window of the papal library overlooking the square. “May the weapons fall silent. God is with the peacemakers, not with those who use violence. ... It is the people who are the real victims.”

Noting the Ukrainian flags below, he said, “Praised be Jesus Christ” in Ukrainian.

In Los Angeles, the attack brought severe condemnation from the Ukrainian-American community.

By Thursday afternoon, more than 100 protesters gathered before the federal building in Westwood to decry the invasion launched by Russian President Vladimir Putin. “Putin go home!” they shouted. They waved Ukrainian flags and wielded signs saying, “Stop Putin” and “Ukrainians will resist.”

Hours later, nearly two dozen church members streamed into the Ukrainian Catholic Church in Little Armenia for a prayer vigil. The Byzantine Rite Eastern Catholic church, a gold-domed sanctuary founded in 1947, has been a center of worship for generations of Ukrainian Angelenos.

They recalled centuries of Russian persecution in Ukraine — of the estimated 7 million people killed by a manmade famine engineered by the Soviet government of Joseph Stalin. A bronze remembrance to the 1930s genocide stands today in downtown’s Grand Park.

And they recalled the power of prayer during World War II, when German tanks rolled west across Ukraine toward Moscow. 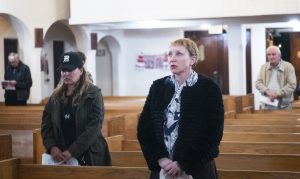 Natallia Tsepenyuk, who immigrated a decade ago, recalled a story about her mother hiding beneath a table with her nephew as German bombs fell, near the city of Lviv. Both prayed. And the bombs sailed past the house and into the yard.

“I came to pray, because I believe it is very good to pray,” said Tsepenyuk, of Canoga Park, wearing a silk scarf and fake fur jacket. “I’m pretty scared for my family. I’m wondering today about them leaving my country with the kids. There was actual bombing near my mom’s house.

“They sat in the basement. On mattresses. They don’t know what will happen next.”

The incense-filled vigil, led by Father Koshyk and an Orthodox priest wearing white vestments with gold Byzantine crosses, included nearly an hour of sung prayer and songs. The service ended with the church singing a Ukrainian anthem — about saving Ukraine.

“Desperate, paralyzed,” said Nataliya Padilla, 52, a native of Kyiv who now lives in Bel-Air Crest, before the service. “All my family are in bomb shelters right now.

“Putin only has one way. He can’t turn around. He must save face. Unfortunately, people are suffering.”

Father Koshyk, who in the Ukrainian Catholic tradition has a family, with a wife and three American-born children, heard about the attack on Facebook. He grew up in Lviv, a city near Poland. And people are saying, “The war has started, the Russians are invading Ukraine.”

“Can you imagine what I’m going through?” said Father Koshyk, 45. “I’m going to bed, and I don’t know whether they’re alive or not.”

For his two American-born sons, the attack was also unexpected. Sad. And very real.

“At first, I thought somebody had bots, edited it, faked it,'' said Daniel Koshyk, 13, of the battlefield images. “But this one was real. I felt it in my heart. You can’t photoshop this … I really wish it would end.”

“It’s a very big loss,” said his 10-year brother Marko. “I think I know Russia’s ploy to destroy our country: bomb all the airports. Everybody will have to stay in the country; all will be trapped. And all the land will be theirs.”

“Wipe away all tears”

In his message to the Nativity parish community, Archbishop Gomez called on those in authority to seek a just peace that recognizes the dignity and sovereignty of the Ukrainian people. And he urged believers to call upon God through prayer to “banish this violence from our midst and wipe away all tears.” 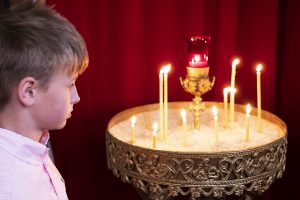 “My prayers in this moment are especially for the innocent victims caught up in this violence, especially the many families who have lost their homes and livelihoods. May God strengthen them, especially the little children,” he said.

“And may God protect the many thousands who are now forced to seek refuge from this senseless bloodshed.”

Editor’s note: The Archdiocese of Los Angeles has created a special web page with resources to unite the Catholic faithful in prayer for Ukraine: LACatholics.org/prayforukraine/.