On the night of Oct. 13, 2013, having just suffered a heart attack, cardiac arrest, and sepsis, and alone in the hospital, Rey Simbol felt like a child reaching out to God. He cried as he prayed and talked to Jesus, entrusting himself to the Lord.

Eventually, he recovered — or, as he says, “God gave me a second life on earth,” a new life that he offered to serve God and his people. Yet, as he kept telling his wife Joy, “I don’t know what God wants me to do.”

Then one Sunday morning after Mass, he was talking to his pastor at St. John of God in Norwalk, Father Ed Dober (now retired), who suddenly asked him, “Have you ever thought of becoming a deacon?”

As he stood silent and more than a little surprised, Father Dober suggested, “Pray over it.” Four years later, having begun formation to become a permanent deacon, Simbol was serving as an acolyte at Mass where Father Dober was presiding.

“Before the Mass,” Simbol said, “I said to him, ‘Father, thank you for inviting me to apply to diaconate formation.’ He said, ‘Don’t thank me. It was the Lord who called you.’ ”

On Saturday, June 11, Simbol was one of 18 men ordained as permanent deacons for the Archdiocese of Los Angeles. The Mass of Ordination marks the completion of one phase of their journey of serving God and his people, and the start of a new one.

For the past five years, these men (17 married, one widowed) have met every other Saturday, either in person at Bishop Alemany High School in Mission Hills or, during the pandemic, via Zoom. They and their wives have studied Scripture and theology and engaged in service projects in their parishes and communities.

As they embark on this new phase of ministry, a few of the new deacons shared the stories of their journey to the permanent diaconate with Angelus. 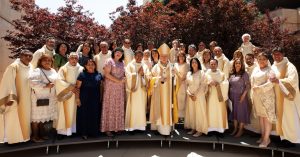 The newly-ordained permanent deacons and their wives with Archbishop José H. Gomez after the June 11, 2022 Ordination Mass at the Cathedral of Our Lady of the Angels. (Victor Alemán)

Service is nothing new to Efrain “Pedro” Solorzano and his wife, Sandra, who met in the youth group at St. Catherine of Siena Church in Reseda, where they were married 29 years ago. Having raised three sons, they have long been active in numerous parish ministries — lectors, extraordinary ministers of holy Communion, altar server trainers, pre-baptism class coordinators, and food pantry assistants.

Both work at nearby Northridge Hospital, he as a nursing assistant and LVN, she in respiratory therapy. That meant they were on the frontlines of the COVID-19 pandemic in more ways than one.

Solorzano said the decision to enter formation was his answer to “a call from the Lord.”

“I had felt a call many years ago but I wasn’t able to figure out how to answer it,” he said. But after the couple attended an information day presented by the Office of Diaconate Formation, the call “felt stronger.”

They both credit the presence of now-retired parish Deacon Pedro Lira for serving as an example of “a new way to serve God’s people.”

As for the formation process, it has been “really good, sometimes intense, and very challenging with a lot to read,” said Solorzano. “Doing Zoom classes during the pandemic was harder, although we still learned a lot. But after five years of formation, I believe this is where God wants us to be.”

Both Solorzanos are anxious to continue serving their parish “in any way that we are needed,” says Solorzano. And for those who are considering diaconate ministry, he invites them to explore, discern (with the help of a spiritual director), and keep an open mind.

“Above all,” he said, “don’t be afraid to listen to the voice of God.” 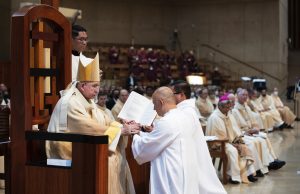 Efrain “Pedro” Solorzano places his joined hands between the hands of Archbishop José H. Gomez during the promise of obedience, one of the parts of the Rite of Ordination to the diaconate. (Victor Alemán)

Kevin McCardle began his professional career as a computer programmer for aerospace firms, then spent 35 years teaching probability and statistics to MBA students, first at Duke and then at UCLA, where he is now emeritus professor in UCLA’s Anderson School of Management.

A cradle Catholic, McCardle also served on the board of St. Monica Catholic Schools, including a tenure as chair, and now is president of the Santa Monica Church’s elementary and high schools.

At parish liturgies, he’s been a lector, extraordinary minister of holy Communion, acolyte, sacristan, and emcee. And in the community he volunteers weekly at a café that serves hot meals to homeless men and women, a service of the St. Joseph Center in Venice.

McCardle is also father to three adult sons as well as a foster son, a Rwandan refugee. And he is a widower, having married his high school sweetheart, Pam, and enjoyed “a wonderful 20-year marriage” until she died 25 years ago. It wasn’t until more recently, though, that he thought of ordained ministry.

“I had already discerned a call to a more committed life and had explored several options,” he said. “It may sound trite, but I felt God calling me to do something else with my life.”

At the recommendation of his pastor, Msgr. Lloyd Torgerson, McCardle inquired about and eventually was accepted into the diaconate formation program. The formation process, he said, has been “transformative.”

“It was a constant challenge to examine our faith, to test our resolve,” he said. “And COVID definitely tested our resolve.”

For McCardle, ordination is at the end, but it also marks a beginning for his new ministry, which he said that his “will be a work in progress.” It will include involvement in the parish’s baptism program and, very likely, representing St. Monica in the Santa Monica Interfaith Council. 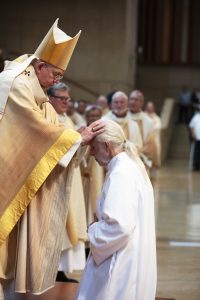 Archbishop José H. Gomez imposes hands on Kevin McArdle during the Rite of Ordination to the permanent diaconate on June 11, 2022. (Victor Alemán)

Even before Rey’s life-changing brush with death, the Simbols knew they had a mission at St. John of God, where they were married in 1990 and raised their two children.

They have been active in many parish ministries throughout the years, including a time as the coordinators of the parish’s soup kitchen for the homeless. The ministry involves packing and delivering donated food to homeless living behind dumpsters and makeshift shelters, and it’s one that is close to their hearts.

“We’ve met many of them and learned their names and their life stories. We’ve seen the hunger in their faces and tears in their eyes as they eat the food we give them, and we’ve heard them say, ‘God bless you,’ ‘You just made my evening blessed,’ and ‘Thank you for remembering my name.’ ”

When the COVID-19 pandemic hit during formation, the deacon class gathered food and toiletries to deliver to a local juvenile detention center.

Remembering and serving those most in need is something both Simbols will keep in their minds and hearts as their service evolves. That is also an outgrowth of the formation process which, Rey says, “has been a blessing.”

On Saturday, June 11, 18 men were ordained permanent deacons for the Archdiocese of Los Angeles. They are listed here with their wives (where applicable) and respective parishes: