Youth and support off the bench proved decisive in Team Seminarians’ 54-48 victory over Team Priests at the annual Archdiocese of Los Angeles’ vocations basketball game at Santa Clara High School in Oxnard Feb. 11.

A squad made up of men studying for the priesthood at St. John Seminary in Camarillo and and Queen of Angels Center of Priestly Formation in Torrance fended off a late 2nd half rally by the priests in a game with several lead changes and a close score throughout.

“It was really intense this year, especially those last two minutes,” said Fr. Mike Perucho, director of vocations for the archdiocese. 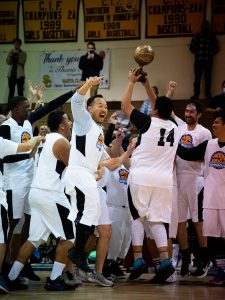 Tommy Green, a seminarian originally from St. Dorothy in Glendora, took home the game’s Most Valuable Player award. Green, who is serving in an internship year at St. Elizabeth Ann Seton in Rowland Heights, led the game in scoring with 16 points but fouled out before the end of the game.

Going into the matchup, the opposing sides had a split record since the vocations basketball game tradition started three years ago: Team Seminarians won the matchup in 2019, and Team Priests in 2020. The game was not played in 2021 due to COVID-19 restrictions last winter. 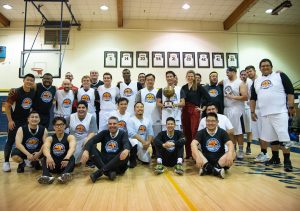 Ticket sales from the game went towards efforts to promote vocations in the Archdiocese of Los Angeles.

This year’s seminarian team played with a couple of advantages: They were coached by St. John’s moral theology professor Dr. Elizabeth Reichert, and also played with a total of 18 players on their roster this year, while the priests only had nine.

“The seminarians came out victorious, but don’t get used to it,” said Fr. Perucho after the game. “The priests are coming back ready to play next year.”