“Scholas Occurrentes,” a global education project promoting a “culture of encounter” among high school students launched by Pope Francis, has been wanting to expand its reach into the United States.

On the morning of Friday, Dec. 13, it was the Holy Father himself who announced from Rome that Los Angeles would be the place to start that process.

And he couldn’t have picked a more special day to do it.

“Holy Father, greetings from Los Angeles,” Archbishop José H. Gomez told his boss on the other side of the world via live video conference. “We are very happy to be with you on this very special day for you as your celebrate your 50th anniversary of priestly ordination. In the name of the whole United States family, we send you our prayers and our greetings on this important day. Congratulations! Ad multos annos.”

Archbishop Gomez was joined by Auxiliary Bishop David O’Connell, LA Mayor Eric Garcetti, and nearly three dozen high school students from around the archdiocese as well as a handful of other dignitaries inside the Cathedral of Our Lady of Angels conference room to officially welcome the invitation for “Scholas Occurrentes” (“Schools for Encounter”) to set up its 14th worldwide office, and its first in the U.S. 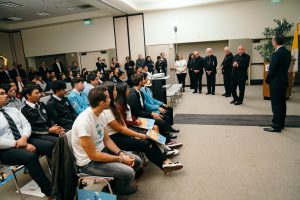 Archbishop Gomez, Auxiliary Bishop David O’Connell, LA Mayor Eric Garcetti, and several local Catholic high school students gathered inside the Cathedral of Our Lady of Angels conference room for the launch of “Scholas Occurrentes” (“Schools for Encounter”) in LA, its 14th worldwide office, and the first in the U.S. (Isabel Cacho)

Archbishop Gomez said “Scholas” is the kind of initiative the country is basically “asking for” in today’s polarized environment.

“It’s time for the Church to be a leader,” said the archbishop. “It’s a great opportunity for kids from different religions to come together and share what they feel and then listen and really help us to understand what they are all thinking. I think their ideas will be a great blessing for the future of the Church and society.”

Pope Francis was accompanied by some 20 “Scholas” students from around the world in Rome for a three-day visit. Participants from Japan and Haiti also were part of the Friday presentation that streamed on the archdiocese’s Facebook and YouTube platforms.

“Scholas Occurrentes” was first launched in Argentina by then-Cardinal Jorge Bergoglio in 2001 when he was archbishop of Buenos Aires. Its stated aim is to “encourage social integration ‎and a culture of encounter among high school students through sports, arts, and technology.” It later became a foundation in 2013, shortly after Cardinal Bergoglio became Pope Francis.

“Los Angeles is important because of the cultural diversity and different religions and social backgrounds that ‘Scholas’ promotes,” said Amengual, who met with Archbishop Gomez to discuss the U.S. headquarters proposal just last June.

Amengual added that the language of art, sports, and technology are “what students use to express themselves and connect, no matter what religion or country they are from. That’s where they can create things there with their minds, hearts, and hands.”

As “Scholas” opened an office in Japan in November just prior to LA, there are national outposts now in Argentina, Vatican City, Colombia, Spain, Haiti, Italy, Mexico, Mozambique, Panama, Paraguay, Portugal, and Romania. “Scholas Occurrentes” is active in 190 countries, integrating 500,000 schools and educational networks of all denominations.

LA offices for “Scholas” will be located on the 10th floor of the Archdiocesan Catholic Center on Wilshire Blvd. in Koreatown.

Garcetti, who had an audience in Rome with Pope Francis last August, spoke in Spanish and English on the video conference Friday.

“We’re excited to have this in Los Angeles and the students are excited to talk about the world, the environment, everything about this moment,” Garcetti said. “In a time of division, we bring unity.” 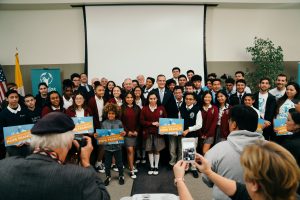 Catholic schools superintendent Paul Escala said Garcetti’s commitment “speaks volumes to the fact this isn’t just a Church-led initiative, but is a collective responsibility of the city that goes beyond the Church’s opportunity to expand beyond the parish and schools.

“One of the blessings we have is a Holy Father who understands how to speak to the youth, the challenges they face as the next generation inheriting a world that seemingly appears divided and under extraordinary stress,” added Escala.

Auxiliary Bishop O’Connell, who along with Garcetti will be on the U.S. board of directors, said his impetus for joining was a concern for the health of young people today.

“Many are suffering from being alone, nervous about the future, what’s happening to their families,” said Bishop O’Connell. “It feels like an epidemic of loneliness among young people. I know the Holy Father loves the youth and has a youthful heart. He wants to see them be able to come out of their isolation and talk to each other, share their hopes and dreams and find ways to work together so they realize they have power to change their lives and the world.”

Amengual said that the outreach of “Scholas” so far has found gun violence and mental health foremost on the minds of U.S. students today. Globally, cyberbullying is also a growing issue. 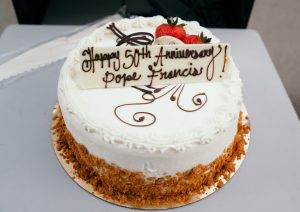 Several students present Friday expressed concerns about finding solutions in their community to homelessness and immigration.

Nathan Toledo of Salesian High School said connecting with students from around the world is “exciting, but taking the first step is the hardest; getting kids engaged in anything is difficult. But once they are in, I think they maintain it and respond to the challenges.”

Ashley Garcia, a junior at Bishop Conaty-Our Lady of Loretto High School, was one of two youth speakers from the L.A. presentation and focused on thanking the Holy Father for his guidance and acknowledging Friday as the 50th anniversary of his ordination. After her speech, the room of students held up signs with shouts of congratulations, bringing a smile to Pope Francis’ face.

“All through my Catholic education, I have been taught about the importance of my faith, and I felt that today in being able to talk to the pope,” said Garcia.

“I felt proud of my faith and it’s important to me as a Catholic and a Latina. I think ‘Scholas’ will be an amazing opportunity for the youth to let us use our voice and power for the future of the Church and express ourselves and be better versions of who we are.”

More photos can be found here.