Singer-songwriter Andrea Vicich was 32 years old when she quit her professional music career to work at a Tijuana orphanage run by the Missionaries of Charity.

“I didn’t want Sony Records to launch my career,” said Vicich, who had been the lead singer for Carnival Cruise Lines.“I wanted to live a spiritual life. I was tired of the business, because I had been in the business since I was young.”

The abrupt decision changed her life forever. But she couldn’t have imagined how many others’ it would change as well.

Two years later in 2009, she left the religious community to go to Peru, where she had lived until she was 25.

She went to Puno, a city of some 140,000 on the shores of Lake Titicaca in the shadow of the Andes, with the goal of helping poor indigenous children and their families in any way she could. Vicich soon found out the peoples’ most immediate need was medical care, specifically surgery to correct cleft lips and palates, to treat ear, nose and throat disorders, and basic dental care.

When she came back home to Los Angeles, she started knocking on doctors’ doors, asking for support for the group she founded with help of the orphanage’s mother superior: The Angels of Charity and Music (ACM).

The vision for the nonprofit organization was to bring together artists, missionaries, medical professionals, and anyone else willing to lend their time to serve the less fortunate in need, like those Vicich first encountered in Tijuana and Puno.

But for the first three years, she said, all she heard was, “You’re not a doctor. How are you going to lead a medical mission?” She was just trying to organize the health care mission, not be a practitioner, she would reply.

Then she met Dr. Terry Shibuya. The head and neck surgeon in Orange County didn’t just have special training in facial plastic surgery, he made it clear he believed in the value of her mission work with the underserved in her native country.

Still, he wondered if flying all the way to Peru, plus another three hours to reach a hospital up in the mountains, would be worth it. “I want to make sure I’ll have patients,” he told Vicich.

“I promise you,” she told Shibuya, “you will have so many patients that you’re going to keep coming back every year.” 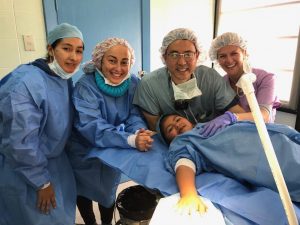 Andrea Vicich (second from left) and Dr. Terry Shibuya (third from left) with a child patient in Peru. (Angels of Charity and Music)

‘This is my ministry’

Not only has Shibuya come back to treat new patients every year, but he’s become ACM’s medical director. This summer will mark his eighth weeklong visit to the South American country.

When asked why he keeps going back, the 55-year-old credited his faith.

“I believe that the reason I’m a surgeon is that this is my ministry,” confided the surgeon, who works full time in Anaheim as a doctor in the Kaiser Permanente network. “This is what God’s called me to do. Whenever you serve orphans and widows and the sick in need, you’re serving God. And that point has been really driven home year after year after year.

“My wife, Joyce, and I believe we can never outgive God,” he added, “and we are always blessed by giving, by helping those in need.”

The ear, nose, and throat doctor (or otolaryngologist) started volunteering internationally in college. He went to Mexico and Haiti to build dormitories and serve youths in orphanages.

During his years at Loma Linda Medical School, he helped run a clinic for the poor in San Bernardino. As a medical resident in Detroit, he volunteered his surgical skills at a local rescue clinic. After graduation, he and Joyce went to India to work at a Christian medical clinic.

Today, Shibuya uses his vacation time in late August to work in Peru, and there’s still no shortage of patients. He continues to focus on children, specifically boys and girls as well as adults with cleft lip and cleft palate disorders. But he also treats general ear, nose, and throat problems.

In Peru, ACM works closely with the local Catholic Church to get the word out to families about the medical group’s upcoming visits to Puno. The local hospital that ACM works out of doesn’t have very high-tech medical equipment, so visiting surgeons bring their own operating instruments.

Cleft lip operations take doctors like Shibuya about 45 minutes to perform, while cleft palates are longer, usually two hours. But complications can add hours to both operations. And at nearly 13,000 feet in the Andes with only half the oxygen at sea level, surgeons standing during operations can run out of energy pretty quickly. That means Shibuya has to limit his operations to only three or four a day.

Still, ACM runs four operating rooms, after screening 300 to 500 patients like a M.A.S.H. unit. Some need to be operated on right away, but others can wait. And the rest don’t really need surgeries. Their health problems, including some dental ones, can be handled by medications or other treatments.

Besides giving direct medical care, one of the key objectives of ACM’s visits to Peru is building relationships with local health care workers. Residents from a nearby medical school assist team surgeons. Nurses in training observe operations and treatments.

“So, for me personally, there’s a tremendous amount of gratification not just taking care of the patients but educating,” Shibuya said. “Philosophically, the goal is not just to help people for today, but for generations to come.” 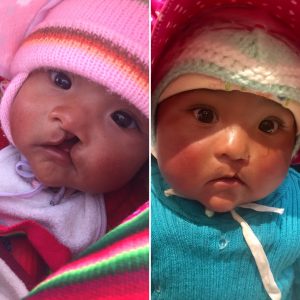 Before and after photos of a child in Peru who received a cleft palate surgery thanks to ACM. (Angels of Charity and Music)

Local doctors and nurses keep track of ACM’s patients when team members have returned home. Sometimes they even send photos of post-operative problems, like infections, to the surgeons who now come from many countries besides the U.S.

“We’re committed,” said Shibuya. “We want this to work. And we continue looking out for the good of our patients in Peru. We really want the best for them.”

He says he’s grateful Vicich persisted and found him after knocking on all those doctors’ doors in Southern California. “We love Andrea,” he said. “She just has the kindest heart. And none of this would have happened without her. It’s been a great experience.”

In 2018, ACM, which also offers university scholarships to high school students, took on another mission in Serbia, where a team works with disabled kids and refugees fleeing religious persecution.

“I organize my calendar this way,” explained Vicich, who still sings for orphans, the sick, and the needy. “We do about four trips a year to Mexico. Then we go down to Peru three times. And now to Serbia once a year.” The team in Mexico can have as many as 50 members. In Peru, 15 to 20 are doctors, with the rest being nurses and volunteers. Every mission starts from the City of Angels.

By now, the teams and their respective missions in all three places are pretty established. Her biggest challenge at the moment, however, is a more personal one: In 2019, she underwent a hysterectomy to remove a malignant ovarian tumor. To make sure that the cancer hasn’t spread, doctors recently started her on chemotherapy.

Still, Vicich didn’t let the procedure get in the way of her mission. She went back to the Tijuana orphanage soon afterward.

“The head sister couldn’t believe it when she saw me walking inside the orphanage,” Vicich recalled. “We had a big Christmas party for the kids there, along with 200 others from the neighborhood. We gave away bikes, toys, whatever they needed.” 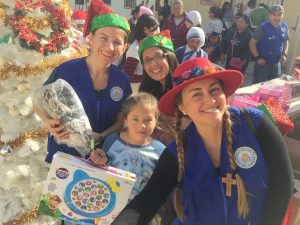 Andrea Vicich and ACM workers celebrate Christmas at an orphanage in Tijuana. (Angels of Charity and Music)

Vicich insists there’s no way her cancer is going to stop ACM’s mission work to Mexico, Serbia, or Peru. She envisions possibly having to play more of an administrative role, sending others to organize onsite groundwork. But the love she feels for the mission is too strong to stop her from doing the work she’s dedicated more than 10 years of her life to.

“I feel that everything that I do for someone, I do for Jesus,” she said. “That’s what I learned with the Missionaries of Charity I worked with in Tijuana. It completes Jesus that way. I strongly believe in Mathew 25:35.

It says when we’re ready to die, God is going to ask us: ‘When I was hungry, did you feed me? When I was in jail, did you come to visit me?’ And so on. That has very much been a guiding principle for me.”

In fact, having cancer has inspired Vicich even more to care for the suffering people ACM serves.

“I’ve always loved being around people who were suffering and then seeing them happy and smiling again,” said the Angeleno. “But now I feel deeper what they feel. It’s a totally different feeling. I told God I’m in his hands. And I promised God that if he allows me to stay longer, I’m going to open a home here in Los Angeles for children with cancer.

“But I’m going to keep fighting,” she declared. “I still have the strength to fight.”