Editor’s note: This story has been updated since its original publication to include new guidance issued by the Archdiocese of Los Angeles since LA County's Dec. 19 announcement.

Churches in Los Angeles County will be allowed to reopen for indoor services for the first time in five months under modified COVID-19 safety guidelines announced Saturday.

The change in protocol from the county’s Department of Public Health (DPH) now allows for both indoor and outdoor “faith-based services” provided they follow social distancing and face covering requirements, essentially ending the ban on indoor religious gatherings in place since July 2020.

The county said it was updating its guidelines to “align with recent Supreme Court rulings for places of worship,” presumably the Court’s 5-4 ruling last month lifting restrictions on houses of worship in parts of Brooklyn imposed by New York Governor Andrew Cuomo, and several similar decisions in other parts of the country that have followed.

The health officer’s modified order does not limit attendance to a certain number or percentage of people, but rather mandates that religious worship attendance “not exceed the number of people who can be accommodated while maintaining a physical distance of six feet between separate households.”

The updated protocols are actually less restrictive than those required for churches during the few weeks that LA County allowed public indoor services in the early summer. Those restrictions capped indoor attendance at 100 people or 25% of a place of worship’s capacity, whichever was less.

Despite the new allowance, DPH stressed that it “strongly recommends” that places of worship continue outdoor services amid the county’s “unprecedented surge of COVID-19 cases, hospitalizations, and deaths” this month.

“Every effort to prevent the spread of COVID-19 to congregants and to the entire community is critical,” read the modified order Dec. 19. 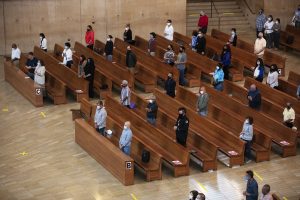 Faithful at the Cathedral of Our Lady of the Angelus are seen separated by social distance at Sunday Mass on June 7, 2020. (Victor Alemán)

In a Dec. 21 letter to priests of the archdiocese, Archbishop José H. Gomez echoed the county's recommendation while leaving the decision on whether to move Mass indoors amid the season's colder temperatures to their judgment.

"At this point, it will be better to continue celebrating outdoor Masses," the archbishop told priests. "However, if you believe it is better to offer live-streamed Mass or to celebrate Mass indoors (if permitted by your County and in keeping with their protocols), you may proceed accordingly."

The next day, the Archdiocese issued updated guidelines for liturgical celebrations with protocols "for parishes who can and choose to return to indoor in-person worship" in LA County. The other two counties within the Archdiocese of Los Angeles, Santa Barbara and Ventura, still do not allow for indoor religious services.

Guidance on mask-wearing, singing, sanitation, and appropriate signage in the updated guidelines is largely consistent with the reopening protocols issued when churches were first allowed to reopen earlier this year.

The announcement came as California is seeing its highest COVID-19 case, hospitalization and death numbers in December since the pandemic began in early 2020.