Working feverishly inside a fenced construction site at Long Beach on Jan. 15, a group of volunteers from St. James Church was determined to fend off the surprise arrival of Saturday morning showers with shovels, pipe wrenches, and paintbrushes.

Due to the pandemic, it had been nearly two years since volunteers from the Redondo Beach parish could join the Catholic Coalition team at the ongoing building site with the Habitat for Humanity’s Greater Los Angeles chapter. They’ve been as anxious to finish up the 10 two-story Craftsman-style homes by the spring as the families have been after several years of applying, qualifying, and often having to re-apply because of delays. Just two blocks away, an empty lot awaits another 36 houses to go up.

The pandemic amplified the perils of job loss, mortgage struggles, and chronic homelessness in the region. Those focused on resolving Southern California’s continuing housing crisis cite the availability of affordable homes as a critical component to turn the tide.

For the last eight years, the Catholic Coalition has been hammering that home as well. 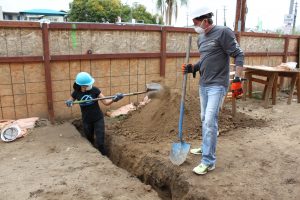 Catholics from parishes in the Archdiocese of Los Angeles have spearheaded local volunteer opportunities with Habitat for Humanity since the nonprofit started in 1976 and the Greater LA Chapter launched in 1990. Volunteers from St. Monica Church in Santa Monica also went to New Orleans in 2007 to help with Hurricane Katrina recovery.

The idea of combining financial, labor, and strategic resources in 2014 led more than two dozen churches, schools, and service organizations teaming up in the Our Lady of the Angels, San Fernando and San Pedro Pastoral Regions.

Retired St. James pastor Father Jim Kavanagh eventually broached the subject to Archbishop José H. Gomez, who endorsed the idea, having worked with Habitat for Humanity during his time in San Antonio.

Christine Gerety, the associate director of outreach and pastoral care at St. Monica, and co-chair of the Catholic Coalition, said they could measure success simply by the 36 houses already built, but “we’re in constant discussion in our Zoom meetings — we know we can be more successful. The only tragedy is we aren’t able to do more with the great need.”

Habitat for Humanity estimated that some 60% to 70% of the families approved for Habitat homes in Southern California are Catholic. The coalition encourages Catholic parishes in underserved areas to support a parish family applying for a Habitat home, explained co-chair Carol Sanborn.

“Think about how some Catholic parishes have schools closing and the community is absorbed by commercial business,” said Sanborn. “If those parishes were guided to having families own their homes and invest in the community, it’s win-win for everyone.”

Volunteers from American Martyrs Church in Manhattan Beach and St. Cornelius Church in Long Beach have been back to the site in recent months, while others from the Catholic Coalition are lining up again.

The two sites located in the Washington District neighborhood of Long Beach under construction need $1.5 million more in funding. The Catholic Coalition is in the process of raising more than a third of that. 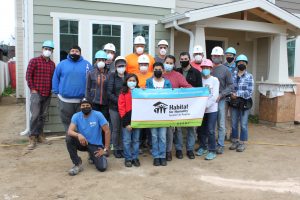 The neighborhood serves the Catholic parishes of Holy Innocents Church, Our Lady of Mt. Carmel Church, St. Anthony Church and St. Lucy Church. A Catholic Charities office across the street from the site handles outreach to the homeless, and has set up temporary shelter on the sidewalks around the Habitat site.

Long Beach natives Valdemar Chavez Jr. and Cynthia Evangelista, and their two children, Valdemar III, 12, and Logan, 10, are recipients of the first completed home at this site, expected to be finished in June. They came Saturday morning to express their thanks to the St. James volunteers.

“We thank God we are getting to live in this house, and know it is getting built with love,” said Evangelista.

For Gerety, the work is rooted in the Christian imperative to love one’s neighbor as oneself.

“It’s critical to who we are. Jesus was a carpenter. What better way to do something in his image?”