Six parochial schools in the Archdiocese of Los Angeles will be consolidated with other schools at the end of the school year, a consequence of shifting demographics and financial woes made worse by the COVID-19 pandemic.

All six schools had seen steep declines in enrollment before the pandemic hit, according to the archdiocese’s Department of Catholic Schools (DCS).

Superintendent Paul Escala told Angelus that in deciding which schools would have to close this year, the archdiocese took a “regional approach” that ensured students could be served in nearby Catholic schools.

“[The affected schools] aren’t the only ones that have faced distress over the years, but a hard look at school finances, enrollment forecasting, and trends in demographic shifts make it clear that we’ll have fewer families in these schools’ neighborhoods to draw new students from,” Escala said.

At St. Ferdinand, located in a working-class area near the northern tip of the San Fernando Valley, “the signs were already there way before” said principal Luis Gamarra, who arrived three years ago. Enrollment was declining, tuition payments shrinking, and families were leaving the area for less expensive neighborhoods, like the suburbs in the Santa Clarita Valley on the other side of the Newhall Pass.

“I don’t think this was a surprise to anybody,” Gamarra said. 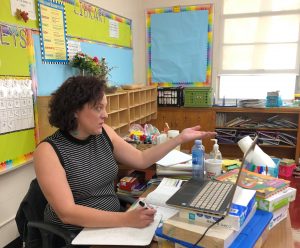 Gamarra tried initiatives to make the school self-sustainable again, including offering registration incentives to school families for referring new students. But numbers remained low and the school was forced to depend on the archdiocese to meet payroll for faculty and other employees.

With the school’s precarious finances, the COVID pandemic has proven to be, in Gamarra’s words, “the last nail in the coffin” for the 91-year-old school.

“At the start of the pandemic we lost about 52 students, and that really put us in a pinch,” Gamarra said. Nearly half of those students’ families cited the need to save money by moving their children to public school during the period when pandemic protocols required remote learning. But those families had said they expected to return to the school once in-person classes could be resumed, an opportunity no longer possible with the school closing.

News of the consolidations was not welcomed by everyone. Some parents have vowed to fundraise to keep St. Ferdinand open. Gamarra feels their pain, but insists the financial commitment from parents to keep the school open for even one more year would be “unsustainable.”

“To be brutally honest, the last thing I would want to do is to string anybody along with false hopes,” Gamarra said. “It would be unfair to families and to staff. That’s where I’m at right now as an administrator.”

At Blessed Sacrament in Hollywood, the school’s fate is perhaps a little easier to understand. Located in the heart of the entertainment industry’s capital, families with children that have left the area have not been replaced by many new ones.

Three alumni of the school, Mark, Renee, and Annette Sikand said they have long supported the school out of gratitude for the Jesuit education they received more than 50 years ago.

“While we are saddened by the news of the school’s closure, we understand that it is necessary to reimagine its use, and we’re excited about the future for the school and the community,” the siblings wrote in an email to Angelus.

“The story here is a very human one, and it was sobering, unfortunate news that we had to deliver,” he said.

He does see encouraging signs for the future. Catholic schools have led the way in reopening classrooms, with now more than 90% of the archdiocese’s schools open for in-class instruction.

While enrollment in lower grades has suffered — in part due to the challenges of distance learning for younger children — middle and high school enrollment has remained relatively steady. A few elementary schools have even seen modest growth in enrollment this academic year, Escala said.

With summer a few months away, the archdiocese will work to identify job openings at other Catholic schools for teachers and staff from the affected schools. The DCS will also work with the Catholic Education Foundation to help students and families in need of tuition assistance find a new Catholic school to welcome them.

At St. Ferdinand, some families are already enrolling students for next year at nearby schools such as Santa Rosa of Lima, which is just three blocks away, and St. Didacus in Sylmar. Others who have been commuting from farther away may look to schools closer to home, Gamarra expects.

It is opportunities like those that Escala says brought an element of hope to the tough meetings with parents and staff at the affected schools.

“We’re blessed with a very vast and large system of schools, so people realize there are alternatives and options for them.”