Jacob Cruz of St. Philomena School in Carson traveled with his family to Washington, D.C., where he was named one of two grand prize winners Dec. 3 in an annual Christmas artwork contest sponsored by the Missionary Childhood Association (MCA).

As eye-catching and serene as the holy figures are presented, what may be most striking about Jacob’s creation is the colorful background on which he chose to place them. Cruz said he decided to use a vibrant color pallet because, “I thought people would like it better because it seemed more Christmas-y and because it seemed more pleasing to the eye.” 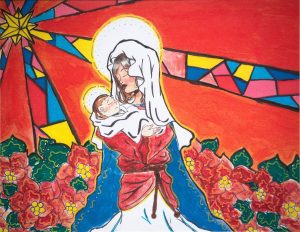 He was right. While Magdalena Arellano, MCA program coordinator, called the image of Mary and the Baby Jesus, “very endearing,” she added that one thing that worked in favor of Jacob’s artwork was that it was “so colorful that it caught my attention immediately. … The whole picture itself was telling of the joy we all experience in encountering Christ.”

Candice Cruz, Jacob’s mother, said that her son has been drawing consistently since he was about 3-years-old, his preferred mode these days being on a digital tablet. While she wasn’t surprised that Jacob wanted to create something to submit, she does admit to being surprised at his choice of colors.

“When I saw it I thought, ‘Wow, OK, let him express himself,” she said, laughing. “I figured we’d submit it and whatever God’s will is will be.’”

Besides Jacob, two other students from the Archdiocese of Los Angeles were also honored as national finalists for the artwork: eighth-graders Mina Michalski of St. Francis de Sales School in Sherman Oaks and Justina Yoon of Beatitudes of Our Lord School in La Mirada.

Jacob’s winning entry is now hanging in Washington D.C. at the Basilica of the National Shrine of the Immaculate Conception. Jacob actually created his picture nearly a year ago when he was a sixth-grader at St. Philomena, which he has attended since transitional kindergarten. 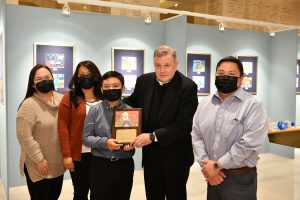 The Cruz family with Msgr. Harrington during their December visit to Washington, D.C. (Cruz family)

In fact, the deadline for submissions for MCA’s next Christmas artwork contest is actually coming up at the end of January. All children in grades K to 8th in the archdiocese are invited to enter. Contest rules and guidelines can be found on MCA’s website.

Jacob didn’t say whether he would be entering this time around, perhaps because he’s still adjusting to having just won.

“I remember, when they told me I won, being pretty excited, kind of in shock,” he said. “I like to draw, it’s fun, but I didn’t really think I had a chance of winning. I really hope that the people who see [my artwork] enjoy it and I hope it always reminds them to think of Jesus.”