Since her time as the sacraments of initiations director at the Cathedral of Saint Francis de Sales in Oakland during the 1980s, liturgy has been Sister Rosanne Belpedio, CSJ’s, passion.

“The diocese [of Oakland] at the time was very, very avant-garde in terms of liturgy. So I say, that’s where I really learned how to do liturgy,” recalled the Sister of St. Joseph of Carondelet.

“It was the lifeblood of the parish. I began to realize being part of it on the team that the community was built around the liturgy and worship. And it was that spiritual bond that we had that was the basis for all the rest of the activities that went on in parish life.”

Sister Belpedio’s passion for liturgy eventually led her to the Archdiocese of Los Angeles in 2008, when she became director of the Office of Worship. Now, she is trading her office on the second floor of the Archdiocesan Catholic Center in Koreatown for a well-deserved retirement.

Her goal during these years overseeing liturgical formation for the country’s largest Catholic archdiocese, she says, has been “to help people appreciate how it’s the liturgy that really creates the foundation for our spiritual life.”

Sister Belpedio was born in Oak Park, Illinois, but grew up in the San Fernando Valley. She was a member of the charter class at St. John Baptist De la Salle Elementary School in Granada Hills and graduated from Alemany High School in Mission Hills. She entered the Sisters of St. Joseph of Carondelet right after.

“Actually, from very early on at De la Salle, I was taken with the whole idea of service to others,” she recalled. “I got the impression right away that’s what sisters did, and I kind of like that idea.”

Growing up, she thought of becoming a scientist, then a fashion designer. But, eventually God’s call started to make itself heard more clearly.

“In my junior year at Alemany, when everybody was getting ready to take college exams, the idea of religious life really came back to me very, very strongly. But it was like, ‘You really don’t want to do this. You want to go to college and have a good time and travel.’

“But there was something underneath all of that where God was saying: ‘I want you right now!’ ”

Answering the call still meant “studying like everyone else.” After earning a secondary credential in education, Sister Belpedio taught religion, economics, and math at St. Joseph High School in Lakewood and University High in San Diego.

Then she made a left turn into parish ministry as a youth minister at the San Diego Mission, and later campus ministry at Cal State Los Angeles and East Los Angeles City College.

It was when she moved to Oakland that she was more closely involved in the sacraments of initiation — baptism, confirmation, and the Eucharist.

From there she went on a mission to Chile for four years, then back to Southern California. She worked at a job cooperative at the St. Joseph Center in Venice and also at St. Clement Church in Santa Monica. For a one-year sabbatical, she went back to Chile, and then worked in the Diocese of San Bernardino. 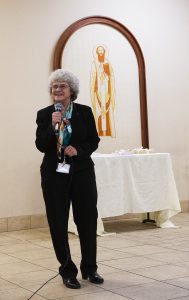 One of her collaborators in the Office for Worship, Ministry of Consolation program coordinator Eva Hernandez, said she’ll miss the religious sister’s leadership.

“She’s an excellent human being,” said Hernandez, who has worked with Sister Belpedio for the last three years. “And she’s always open to listen, to give you advice, to pray with you about things going on in your personal life.”

Heading the Office of Worship has been much more than a day job for Sister Belpedio, according to Hernandez. It’s a ministry that has engulfed her whole life.

“It's her passion. When she talks about liturgy, it’s always the Eucharist being the ‘source and summit’ of our teaching, our religion,” the co-worker noted. “And she strives for improving the liturgical, the worship in parishes and for the whole archdiocese. She’s always striving to do it better and better.”

When talking about her love for liturgy and worship, Sister Belpedio said it’s all about connecting to God, hopefully, at a deeper level. And that not only makes individuals and parishes better, it makes the whole Church better. Put another way, liturgy is simply helping folks to pray.

“What I always tell people is that we are not ‘giving’ people their faith,” she stressed. “God gives people their faith. But we’re helping to facilitate their personal connection. And that’s all about community and sharing our stories. That’s supposed to happen at Mass, especially in the priest’s homily. But it also happens after Mass having coffee and donuts. It’s that testimony with others that convinces me day after day after day that there is a God. Because of the presence of God in the lives of other people.”

The main liturgical task during the coronavirus (COVID-19) pandemic, she said, has been to keep that community going over Zoom and other interactive social media.

“That’s why this pandemic is so devastating for us,” said Sister Belpedio, “because our most important thing is still coming together as a community. And in coming together, we give witness to one another. And we support one another in that way.

“We can’t do that now in the way that we have become accustomed to,” she pointed out. “We have to find new ways to do that. That’s really the challenge of this moment.”