One by one, eight poster-sized images of the North American Martyrs came up the center aisle of American Martyrs Church, carried in by parishioners and then placed on easels surrounding the altar.

Each Mass at the Manhattan Beach parish on the Oct. 19-20 weekend began with that procession, amid the energy generated nearby from an annual parish fair celebration on the school playground and in the gym.

It was both a remembrance of the feast day of the Jesuit missionaries from France in the 1600s, who became the Church’s namesakes, and a way to connect parishioners with further context in commemorating World Mission Sunday.

“One can’t say one is a Christian without being missionary — it’s the essence of our faith,” said American Martyrs pastor Msgr. John F. Barry.

“This weekend is so symbolic of our parish community. We celebrate the missionary spirit here, especially with our annual fair, where we can meet new people and have a chance to evangelize,”  said Barry.

“That’s why it’s an exciting opportunity for us every year to have this feast placed in the middle of October along with World Mission Sunday. The energy motivates us and makes us realize how blessed we are.”

In 1926, Pope Pius XI instituted Mission Sunday for the whole Church with the first worldwide Mission Sunday collection taking place on the next-to-last Sunday in October, starting in 1927.

On World Mission Sunday in 2017, Pope Francis announced the Extraordinary Missionary Month October 2019, with the theme “Baptized and Sent,” which coincided with the Synod of Bishops for the Pan-Amazon region.

In global solidarity, it is a way that Christians recognize their responsibility of evangelization with a special collection and prayer.

Put into action by the Archdiocese of Los Angeles’ Mission Office, Msg. Terrance L. Fleming, executive director, and Lydia Gamboa, director, noted that some 50 missionary speakers helped spread the word of the importance of the day, and the month, on Oct. 20.

“It is essential to hear the stories of those who are around the world serving in missionary work because they have good news to tell,” said Fleming, who also celebrated a Missionary Childhood Association Mass Oct. 16 at the Cathedral of Our Lady of the Angels for some 3,000 students and their families. They had raised more than $30,000 with Catholic Education LA to help those affected in Indonesia by a recent 7.5 earthquake.

Some 50 speakers visited parishes throughout the archdiocese Oct. 20. The missionaries represented projects involving the Maryknoll Sisters, the Sisters of St. Joseph of Carondelet, the Global AIDS Interfaith Alliance, Augustinians of the Assumption and Hands Together Haiti. They also explained work they had been doing in countries such as Mexico, India, Jamaica, Nigeria, Uganda, Tanzania, Vietnam, and Rwanda. More than $1 million was anticipated to be raised through the special collection envelopes and online campaign.

“The Holy Father is asking us to take action with mission,” said Gamboa. “It’s amazing to me that here and in places like Ghana, we are all doing the exact same action on World Mission Sunday, to know all of us have this responsibility.”

“This was an opportunity to implicitly do a bit of education about the fact that they were martyred over a span of seven years and all at relatively young ages,” said Jimenez.

“I felt like having our parishioners — young, old, individuals, couples, families and friends — process the eight images really humanized the martyrs for us and allowed us, through a simple ritual, to connect our own life story and journey to our namesakes. We received lots of positive feedback and gratitude from parishioners.”

On a weekend where American Martyrs Church’s deacons were asked to do the homily, Deacon Chris Amantea connected the Scripture readings from Exodus about the power of prayer in prevailing over adversity in the way Moses had Aaron and Hur at his side to hold up his arms.

Amantea, who also serves as the San Fernando regional assistant to Auxiliary Bishop Alex Aclan, pointed out how the North American Martyrs feast day celebration was a poignant example about “a group of men that was persistent and did not find being persistent inconvenient.”

American Martyrs parishioners who regularly see the statues of the eight North American Martyrs on the north side of the church can also be inspired to become personally involved.

Barry, who recently returned from a trip to Santa Rosa Cuilapa in Guatemala with members of the local Knights of Columbus, was preparing for a return visit with about a dozen women parishioners committed to helping finish building a Catholic church there. 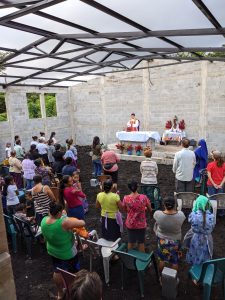 “We have active missionaries from American Martyrs who serve the poor and those in need within our own archdiocese, but we also have people who build water wells in Africa, help with orphanages in Mexico, and now, making many trips to Guatemala to serve and witness,” said Barry.

“What Deacon Chris said in his homily, it’s typical of what a missionary does — they can’t be in a place without the support of prayer. On Mission Sunday, we hold up the missionary’s arms throughout the world, with financial support, with prayer, and some getting on a plane and traveling.

“Someone even asked me: ‘Aren’t you going to a dangerous area of the world?’ Dangerous? That word has no place when we look at the lives of our missionary patron saints. We can override that fear by the action in our lives. Today we celebrate the fact that we are standing on the shoulders of people who were not intimidated because of the challenges of their time. That’s a good message for us.”

A vocation both human and divine