Profound sadness and bittersweet hope filtered through song and testimony during the recent Kobe and Gianna Bryant Celebration of Life event at Staples Center. Yet as they experienced all  that firsthand, a group of students, coaches, and faculty at Bishop Mora Salesian High School appear to have harnessed that energy to propel its boys basketball team on a historic run.

Some 50 members of the Salesian basketball family were invited to attend the Bryant memorial on Feb. 24, a fruit of the relationship forged by the college-prep school of some 400 boys with Lakers executive Tim Harris, the team’s chief operating officer and senior vice president of business operations.

Harris arranged for a Staples Center suite so the group could experience the two-hour service less than four miles from their east LA campus.

The media attention given to Bryant’s Catholic roots — especially the story of his visit to his local parish in Newport Beach the morning that he, his daughter Gianna, and seven others died in a Jan. 26 helicopter crash — made an impact at Salesian, as many students wore Bryant jerseys to school on the following Monday. 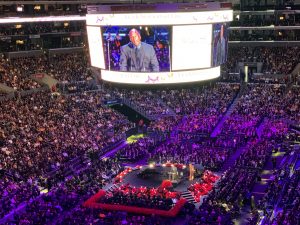 Now, the inspiration the group of boys took away from the memorial is something team members are crediting with uniting their focus on the basketball court: the small but defensive-minded roster captured the CIF-Southern Section 3AA championship on Feb. 29, four days after the memorial. It’s the first title in the school’s 60-plus-year history.

“I can feel Kobe’s messages relate to Salesian and Christianity,” said Alex Moriarty, a junior starter on the team. “It’s been about giving it your all, never giving up. That embodied Kobe. That has brought everyone together.”

Salesian president Alex Chacon, a class of ’94 alum, explained how Harris was invited to the school by head basketball coach Jack Mai to speak at a school assembly about ways of overcoming adversity. The appearance was about 10 days before the Bryant helicopter crash.

Harris, in addition to donating some supplies to the team, reconnected during the team’s CIF quarterfinal game, delivering a pre- and post-game locker room talk. Harris said it was natural for him to invite members of the school to the memorial because of how so many have said they were huge fans of Bryant’s career.

Chacon said the team’s unprecedented run, combined with the impact of the Bryant memorial on the boys, has made him feel a deeper connection with the students.

“We’re a very loving community around here, and hugs are very common, so it was inspiring to see the range of emotions with the staff and students as they reflected on that entire experience,” said Chacon.

“We are blessed with the opportunities we receive. We’re a very intentional community. Part of our ‘Salesianity’ is to accompany the young and show them they are loved. This particular moment has also allowed me to reflect about how much these students are part of my own personal journey.”

Salesian principal Mark Johnson noted the moment when the memorial service’s host, Jimmy Kimmel, referred to how the Catholic faith offers a sign of peace at Mass before asking the 20,000 in attendance to take a moment to make a similar gesture with those around them.

“He made the observation that it’s often at sports events and also at church when we turn to people who might be complete strangers and offer our shared humanity,” said Johnson. “That moment in the arena, we appreciated the moment to connect with each other.”

This principal hopes the boys took away more from the service than just the inspiration to carry on Bryant’s famed “Mamba Mentality.”

“As an all-boys school with a male-dominant culture, that’s even more reason for us to pay heed to that message about female empowerment and the importance of girls sports and in terms of lifting up women in our culture and society. We’d hope our young men recognize the importance of that.

“The common connection for us, that Catholic connection, is important to be in support of Vanessa Bryant and their daughters as well, so our prayers and our faith in what we can do to bring them peace is important as well.” 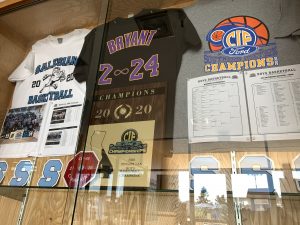 Adrian Lopez, Salesian’s director of admissions, said the service spoke to him in a special way as the new father of a baby girl.

“I saw part of the grandeur that was Kobe was the fact he was a consummate ‘girl-dad.’ We try to instill into our students that they’ll be fathers someday,” he said.

Lopez said the school’s staff often ask the boys, “What morals and ideals will you strive to pass on?”

Hector Santiago, a junior at Salesian who is the basketball team’s videographer, said he was most inspired by the words of Bryant directed toward his daughters that were printed on the back of the memorial program.

Max Lopez, a freshman basketball player at Salesian, said his previous impression of Bryant simply as a hard-nosed, driven player changed when he heard all the tributes to his fatherhood. He recalled how one of Bryant’s last acts, as described by his agent, was a text to see if he could help someone get an internship at a Southern California sports agency.

Jesus Martin, the Salesian senior class president and a soccer player, called the Bryant memorial “an eye-opening experience. There were moments of solemnity but we were joyful to be there. It was a beautiful moment. We all say we’re united through our faith, and to know someone like Kobe, the kind of influencer he was, we shared the same religion and belief. It shows how we can take upon his values and morals and incorporate it in our everyday life.” 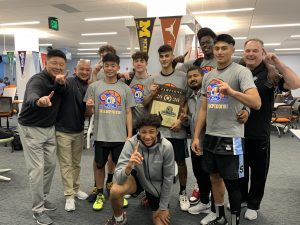 Salesian’s narrow 56-55 win over Hillcrest of Riverside in the CIF-3AA title game in Santa Ana gave the Mustangs a 28-4 record, winning their last 11 in a row and 18 of their last 19. Moriarty tied with teammate Kenji Pallares for a game-high 16 points.

As a bonus, Salesian was given entry into the Southern California Regional tournament for a shot at a state title, but also boosted into the Division II bracket. As a No. 14 seed in the 16-team division, the Mustangs upset No. 3 Foothills Christian of El Cajon, 53-50, in the first game on March 3. But in the regional semifinals, they lost to No. 6 Roosevelt of Eastvale, 49-38. Salesian came up two wins short of going to the state title game against the Northern California winners, set for March 14 in Sacramento.

“(Former Lakers coach) Phil Jackson would always talk about the journey instead of the destination and, for basketball in general for our team at Salesian, I feel like that encapsulates our season,” said Moriarty, who had a team-best 17 points in Salesian’s 45-25 CIF semifinal victory over Keppel on Feb. 21.

“The support for our team here has been outrageous. I feel we have earned it. From Day One, we knew if we had the talent and worked hard enough we could reach our goal of a [CIF-Southern Section] championship. I feel like Kobe’s mantra.”