Drive west along Highway 126 west of Santa Clarita on a Sunday morning into the town of Piru. Take a right to East Center Street, and you’ll think half the town must be gathered for Mass.

In reality, it’s about 200 mask-wearing, socially distanced, hands-sanitized parishioners who assemble outdoors for the 8:30 a.m. Spanish Mass, plus another hundred or so for the 10 a.m. English Mass, at San Salvador Mission, a tiny Catholic outpost in northeast Ventura County.

Their church, since last summer, is the garden and patio area outside the actual church building that seats around 250, but only 75 maximum in these pandemic-induced times where indoor gatherings are prohibited. So the outdoor space allows more to gather, safely, to listen to the word of God and partake of the Eucharist.

Most of all, it enables the working-class parish community of some 1,000 Catholics — more than half of Piru’s official population of 1,800 — to stay connected, even if it is only masked face to masked face. It is preferable, parishioners say, to Zoom, email, or telephone. 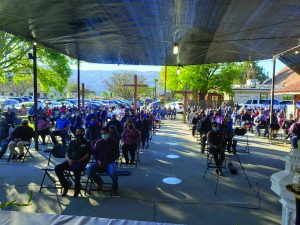 “To me, the Mass is all about Christ,” said Ricardo Barbera, a semi-retired construction project manager who has attended San Salvador for nearly 30 years. “And that means connecting with people, which we can do when we’re outside.”

“When we were able to come together last year after having to watch Mass on livestream and not being able to receive Communion, it was very emotional for a lot of us. And our garden is so beautiful.”

The faithful of San Salvador, in fact, are so pleased with their outdoor arrangement that they aren’t sure they want to return to indoor Masses, said Father Bernard “Barney” Gatlin, the retired priest who has served at San Salvador for the past 13 years.

“We’re happy being outside,” said Father Gatlin, who presides at all three weekend Masses, including a Saturday vigil in Spanish. “The only problem has been the Santa Ana winds that required us to clean up leaves every day, but that’s behind us. We’ve acquired space heaters and so we’re reasonably comfortable outdoors. And if it rains, people will bring umbrellas.”

Since last summer, most parishes in the Archdiocese of Los Angeles have been celebrating Mass outside due to the COVID-19 pandemic, in accordance with local public health guidelines. In December, Los Angeles County announced an end to its ban on indoor public worship, provided worshipers followed certain safety measures.

But San Salvador, which for nearly 100 years has existed as a parochial mission of St. Francis of Assisi Church in the neighboring town of Fillmore, is located in Ventura County, which along with Santa Barbara County has not yet allowed churches to open.

“People have been very cooperative,” added Father Gatlin, who in 2006 oversaw construction of an outdoor Stations of the Cross project that surrounds the garden area, and who parishioners credit for setting the tone of welcome.

“The way Father Barney is, the way he carries out his mission as a priest really inspires us to do likewise,” said Leticia Abrego, a parishioner since 1995. “So we try our best for people to feel welcome.”

Abrego has helped create the outdoor environment, and said she was touched when she saw people wearing masks coming forward to the altar and blessing themselves. 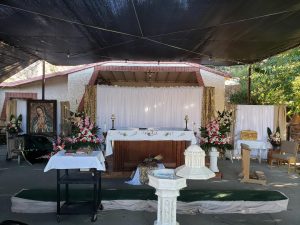 “That gave me so much joy,” said Abrego, who attends the 8:30 a.m. Sunday Mass. “It was like people were saying, ‘I’ll follow the health rules, but I’m not going to let this pandemic interfere with my faith in Jesus.’ They love their faith and their church.”

Celebrating Mass outside has also inspired Abrego to go forward with celebrating her daughter’s Quinceanera.

“I was arranging the altar for Las Mañanitas for our Guadalupe celebration, and there was a wedding the next day that we realized the flowers would be perfect for,” she said. “That’s when I said, ‘I want my daughter’s Quinceanera to be outside.’ Because I feel like God is everywhere I go.”

“There are certain readings, like the letters of St. Paul, when you can really put yourself in the place of the author,” he said. “And St. Paul probably preached outside as much if not more than inside. Inside the church, you look at walls at paintings. Now when I’m outside, I see the people.

“And you know what?” he added, smiling. “After a while, you don’t notice that you’re outside. You’re one with nature. You’re filled with the Spirit of Christ. And that’s what we celebrate.”