‘I didn’t believe it’: SoCal Catholics reflect on close calls with recent fires

Abbot Damien Toiloro and the Benedictine monks of St. Andrew’s Abbey in Valyermo smelled smoke for a week before the Bobcat Fire coiled over the San Gabriel Mountains toward their monastery at the edge of the desert floor.

“Some guys were getting sick because of the smoke,” he said. The owner of a hospice agency offered to take a dying monk into her own home if evacuation became necessary.

The fire, which ignited on Sept. 6, had already threatened but spared Immaculate Conception Church in Monrovia.

On Sept. 11, “We could actually see the flames,” said Maricruz Avila, the parish business manager.

Due to the coronavirus (COVID-19), all Masses are held in the Immaculate Conception parking lot, which offers no protection from smoke. Father Joachim Lepta canceled public Mass from Sept. 11 to Sept. 18.

“It was because the quality of the air was very terrible. The smoke was heavy. The falling of the ashes was very heavy. You couldn’t be standing out there for 10 minutes without feeling short of breath,” Avila said.

The Benedictine community has lived that lesson for decades. 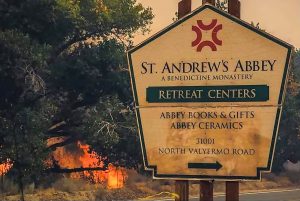 St. Andrew’s was founded in 1955 by Benedictines who had been arrested, imprisoned, and exiled from communist China. The primary ministry of its current 20 monks is hosting retreats and spiritual direction, which has been on hold since the pandemic began in March. Then came the fire.

The monks prayed for neighboring homes, for firefighters, and especially for the Benedictine sisters in Glendora and Carmelite sisters in Duarte. The sisters were on standby to evacuate, but the fire spared them.

“That’s why, when we received a warning that we might have to evacuate, I said, ‘OK, it will probably be here in a week.’ The very next day, evacuation was mandated,” Abbot Damien said.

Most of the monks became guests of American Martyrs Church in Manhattan Beach, which had hosted them during a voluntary evacuation from the Station Fire in 2009. Parishioners and friends have brought food.

Father Francis Benedict, a spiritual director, sees their experience as an opening for greater trust in God.

“If you have a prayer life, you are spiritually prepared for anything,” he said. “I was praying to be abandoned to the Father’s will. We didn’t know God’s will. Would we have nothing when we came back and have to build a new monastery? The fire is aggressive. Bad things have happened to good communities. It’s not like we are exempt. We are entitled to the whole paschal mystery, not just to the Resurrection.”

On Sept. 18, the day after the evacuation, the maintenance man called to say that the fire had reached the grounds.

“My heart sank,” Abbot Damien said. “In my mind there was the vision of the founders, all of the work, the energy, the blood, sweat, and tears. It is a beautiful piece of property.”

He saw the flames on a security camera app. Other monks began to call.

“There was a lot of sadness,” he said. “I shed a few tears. And then I said, ‘God knows all things. He knows the fire is at the abbey. Therefore, if the abbey burns down or doesn’t burn down — and we all thought it was going to burn — we are in his hands.’ ” 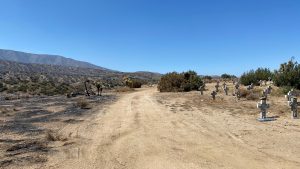 The blackened dirt to the left shows where fire crews stopped the Bobcat Fire's advance – just feet away from the cemetery at St. Andrew's.

The next day at 5 a.m., a firefighter called.

“The word he used was ‘unscathed,’ ” Abbot Damien said.

“Spiritually, it reminded me of the Resurrection. The abbey is gone, then it’s alive. I didn’t believe it.”

He realized he was repeating the experience of Doubting Thomas.

“I always said that I would never be a ‘Doubting Thomas.’ Yet, when the photos came, I was still saying, ‘I have to see it for myself.’ ”

Days later, fire officials confirmed to Angelus that during the firefight to protect the property, a strike team was able to “hold the line” using water hoses right on the edge of the abbey grounds, and just feet away from the first gravestones of St. Andrew’s cemetery.

“It is 100 percent evident when you get there that the firefighters saved that monastery,” said Sky Cornell, public information officer for the LA County Fire Department. “You can see the line right in the dirt where everything’s black from being burnt, and then it’s not.”

Meanwhile in San Bernardino County, the El Dorado Fire had one Catholic parish racing against the clock. St. Frances Xavier Cabrini Church in Yucaipa had only 35 minutes to get ready to take in dozens of evacuees trying to escape the blaze. On Sept. 5, flames erupted in El Dorado Ranch Park, and by the next day the fire was threatening a youth shelter. The facility director reached out to her father’s parish when no one else could take them in.

“They had exhausted all their options,” said Joseph Scarite, St. Frances Xavier Cabrini Church emergency preparedness coordinator. “They had nowhere else to go … so we made it happen.” 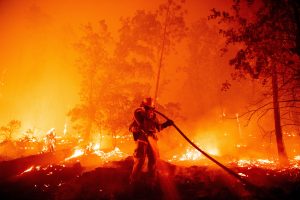 The emergency preparedness team, along with members of the Knights of Columbus and Columbiettes, sprung into action, transforming the parish center into an evacuation center. The volunteers said after setting up basic accommodations, 31 teens and eight counselors arrived in a caravan, looking taxed and tired.

“This was an emotional time for them,” said Scarite. “The smoke levels were very intense. They didn’t get any sleep that first night of the fire.”

While the volunteers did their best to make the evacuees feel welcome, the Red Cross delivered cots, blankets, and toiletries. Local restaurants provided pizza and the school district allowed use of their showers.

“Those were their immediate needs and then they felt more comfortable,” said Scarite. “Initially there was a lot of apprehension.”

Bishop Alberto Rojas, coadjutor of the Diocese of San Bernardino, who came to Southern California from Chicago early this year, said the vast devastation of the wildfires was shocking.

“It is very hard for me to believe the number of fires that take place in California. I am so sorry how many people are affected,” said Bishop Rojas. “I am glad that our parish was able to open as a shelter for those people.” 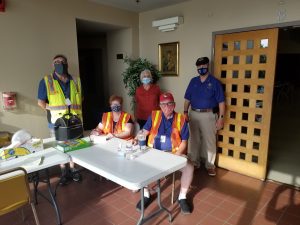 The evacuees came from Trinity Youth Services, a residential facility for abandoned and abused teens. Counselors help residents emotionally recover then find them a safe place to live. Scarite said these teens were the last people to deserve such upheaval.

“The smoke was so bad they couldn’t even go outside. They did a lot of puzzles and Monopoly games and things like that,” said Scarite. “Plus, they had their cellphones and laptops. One of the first things they asked was, ‘What’s the (Wi-Fi) password, Joe?’ ”

St. Frances Xavier Cabrini Church has been a designated Red Cross Neighborhood Shelter for 10 years. While the parish served as a gathering point during past fires, it’s never been used as an overnight shelter. Scarite, a retired firefighter, said he works with experts to keep up on the latest safety practices and that his parish may be more prepared than most.

“There’s a lot of retired cops and firefighters in Yucaipa, so if I need something, I know they are available,” said Scarite. “You gotta know your parish right?”

What makes those retired professionals so helpful is also what makes it so personal when they learn, as they did here, that a firefighter had died. U.S. Forest Service officials announced that 39-year-old Charles Morton was killed while battling the blaze. The volunteers made a point of praying for him, as did Bishop Rojas.

“I have been praying for all the people affected, and also for the (deceased) firefighter and rescue crews who risk their lives by saving lives,” said Bishop Rojas. “I am very grateful to them, may God bless them.” 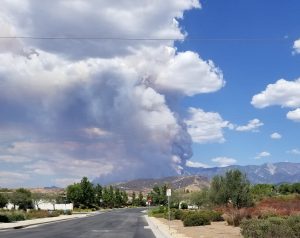 The view of the El Dorado Fire from behind St. Frances X. Cabrini in Yucaipa on Sept. 5, the day it was sparked by a gender reveal party gone wrong. (Submitted photo)

The flames got as close as 10 minutes to the church’s doors but never forced them to close. Surprising, Scarite said, since the fire, which started after a pyrotechnic device was lit at a gender reveal party, burned “so hot and fast.”

After five days of living in the parish center, it was safe for the evacuees to return to Trinity Youth Services.

“They were grateful for everything,” said Scarite. “We gave them some nice prayers to take back with them. Hopefully they’ll be able to reflect on that.”

The volunteers have had time to reflect as well.

“We got through the week. It was pretty tough, pretty tiring for everybody,” said Scarite. “Though once I got there [parish center], I didn't think about anything. I just felt like we were doing something good.”