Thanks to Mission San Gabriel’s 250th birthday celebration this year, Los Angeles is getting the closest thing to a local “Camino Real” since the days of the first Spanish missionaries.

Made up of 22 parishes across three counties, the churches chosen for the special “Forward in Mission” jubilee year starting this month will serve as pilgrimage sites where Catholics can pray and visit.

When viewed on an interactive Google map, the constellation formed by the churches is a vast one: What originates as a dense, concentrated cluster in the LA Basin stretches southwest across the sea to Catalina Island, north to Solvang and Lancaster, and all the way east to Walnut and Irwindale.

Archdiocese of Los Angeles’ Vice Chancellor for Ministerial Services Father Parker Sandoval, a lead organizer for the jubilee year, hopes the initiative will stir up the same missionary spirit that led the first Spanish Franciscans to evangelize Southern California.

“As the first missionaries to this land walked up and down the state proclaiming the Gospel, we can participate in pilgrimage and step through a Holy Door and enter ministry of Christ, and then step out through the same doors to proclaim his good work in deed,” said Father Sandoval.

Those who enter one of the pilgrimage sites are invited to spend time and pray. Thanks to approval from the Holy See, a plenary indulgence, which removes the temporal punishment due to sins already forgiven, is offered to visitors who pray at them. Each church has a dedicated Holy Door, a customary symbol of every jubilee year, for pilgrims to walk through.

The theme of this pilgrim movement, “Step into Christ, Step out to Mission,” encourages a purposeful return through the same Holy Door represented in chapter 10 of the Gospel of John, said Father Sandoval. 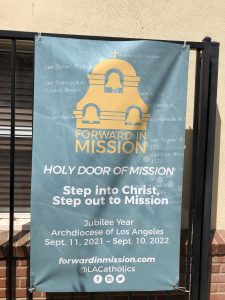 A "Forward in Mission" poster greets visitors at St. Clement Church in Santa Monica, one of the jubilee pilgrimage sites. (Archdiocese of LA)

There is at least one pilgrimage site in each of the 20 deaneries spread across the archdiocese’s five pastoral regions.

Some parishes had an advantage in qualifying for pilgrimage site status than others; all five historical missions in the archdiocese represent their respective deaneries, including, of course, Mission San Gabriel, founded in 1771 by St. Junípero Serra as the first Catholic outpost in the area.

Other sites offer faithful a chance to connect with some lesser-known LA Catholic history: Consider the inclusion of St. Catherine of Alexandria Church in Catalina Island. Records indicate Masses of thanksgiving were celebrated on the island when Spanish explorer Juan Rodriguez Cabrillo first arrived to the region in 1542, as well as Sebastian Vizcaino in 1602, more than 150 years before the first missions were founded.

St. Catherine was established in 1902, rebuilt after a fire in 1913, and has been at its present site since 1950 with some 300 registered parish families on an island that has about 4,000 residents full time year round.

“We still have a banner up from when we were part of the (2015-2016) Jubilee of Mercy and we’ll be putting up a new banner soon for this jubilee,” said St. Catherine pastor Father William Ruther. “We are all about history here.”

There is more history to note: Our Lady Queen of the Angels Church near Olvera Street, also known as La Placita, was founded in 1784 as an extension of Mission San Gabriel. It is a pilgrimage site within a short walk of another site — the Cathedral of Our Lady of the Angels — where a historical exhibit of “250 Years of Mission” will be on display.

St. Columbkille Church in South Los Angeles, also part of Our Lady of the Angels region, made the cut for its deanery since it will be celebrating its 100th anniversary during the jubilee.

Many of the pilgrimage sites — including St. Catherine Church in Avalon — anticipate being part of a return to live participation in the image procession of Our Lady of Guadalupe and St. Juan Diego. That starts in late October and will culminate on Dec. 5 with the annual procession through the streets of East LA.

A more modest choice is St. Clement Church in Santa Monica. Founded in 1904, the small parish (500 registered families) is often overshadowed by the more well-known St. Monica Church a few miles away (8,000 families).

“Many people know more about St. Monica Church in this city, but I think they picked St. Clement to make us more visible and also to recognize the potential because of the changing demographics,” said Father Joseph Wu, a Carmelite priest originally from Taiwan who has served as administrator at St. Clement since 2019.

St. Clement, located on the border of Santa Monica and Venice, arguably the epicenter of the LA Westside’s homeless crisis. It shares space with two Catholic-affiliated nonprofits on the front lines of LA’s homeless crisis: Catholic Charities’ St. Robert’s Center and the St. Joseph Center, both of which provide a multitude of social services.

“Whether it is homelessness, the environment, immigration, refugees, we are right in the middle of it here,” Father Wu said of his parishioners.

On the other side, the parish is also square in the middle of the Westside’s so-called “Silicon Beach.” According to Father Wu, “the young techies coming to this area need us as part of a sense of a greater mission, to find a spiritual belonging, their place in the world as a human and in community.”

“St. Clement has a lot to offer. We are honored to be a pilgrimage site for all that.” 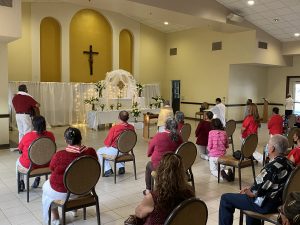 LA Catholics pray at Our Lady of Guadalupe Church in Irwindale during the 40 hours of adoration. (Archdiocese of LA)

To that point, the archdiocesan digital team is developing a smartphone app for pilgrims to stamp a digital passport upon visiting a site. It would also allow users to scan codes for specific prayers and suggest acts of charity to do afterward.

The plan is for neighboring parishes in each deanery to organize walks to the pilgrimage site in prayer and song. A special “camino” pilgrimage is planned for a walk from Mission San Gabriel to the cathedral.

Ultimately, according to Father Sandoval, the pilgrimage initiative is about giving a fresh impulse to evangelization efforts in the archdiocese.

“A historical milestone isn’t simply a commemoration of the past, but a way to stir up new enthusiasm for our Catholic faith with an overarching aim to get new missionaries,” said Father Sandoval.

Saint of the day: Ignatius of Antioch