For the second year in a row, 28-year-old Jeannette Vasquez, her siblings, mother, and other family members will come together at Santa Clara Cemetery in Oxnard to create a traditional Day of the Dead altar in honor of her father, Rafael, who died Oct. 2, 2015.

On the altar, along with pictures of their loved one, they will place the traditional sugar skulls, several pieces of special sweet bread or “pan de muerto” (“bread of the dead”), bottles of the Mexican soda he loved and the exact brand of hot chiles he preferred to eat. A few weeks ago, they had a Mass in his honor to mark the anniversary of his passing.

For this Southern California family of Mexican origin, the point of the Day of the Dead (more commonly known as “Día de los Muertos” in Spanish) celebration is to honor the memory of their loved one. But now that they’ve immersed themselves in the altar-making as well as joined other families doing the same at Calvary Cemetery in East LA, they feel they are also celebrating his life.

“We knew of this tradition, but we had never physically created an altar for anyone,” Vasquez said. “We did it last year and loved the event so much we decided to do it again. It is true that there is sadness in this remembrance, but this allows us to also feel the happiness.”

Like the Vasquez family, thousands of others are expected to participate in the Day of the Dead celebrations in two Catholic cemeteries in the Archdiocese of Los Angeles: Oct. 26 at Santa Clara Cemetery in Oxnard, and Nov. 2 at Calvary Cemetery in East LA. 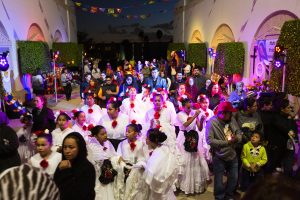 It’s only the sixth year that “Día de los Muertos”-themed events are taking place in LA’s Catholic cemeteries. But they draw from traditions deeply ingrained in Mexican culture, and to a lesser extent, in those of other Latin American countries.

According to Ernesto Vega, who oversees Adult Faith Formation in Spanish for the archdiocese, the version of the Day of the Dead celebrated in Southern California and all over Mexico has its roots in pre-Hispanic cultural traditions blended with the traditional Catholic festivities of All Saints’ Day (Nov. 1) and All Souls’ Day (Nov. 2).

“For the Anahuac (pre-Hispanic) cultures, the indigenous had a concept of life after death in which fulfillment depends on the virtues you have practiced during your physical life. The level or degree of light you will have in the afterlife would be according to the goodness and the integrity that you practiced,” explained Vega.

“That concept is not different from the Catholic-Christian belief that a person will manifest their faith through good deeds and virtues that will be practiced in the image of Jesus Christ. These will represent the fullness of life once resurrected.”

In Mexico, and in the homes of Mexican immigrants in Southern California, the cultural traditions of the Day of the Dead have always been celebrated along with the religious.

“The celebration did take place in the Church in parishes, prayer groups, youth groups, and Latino families, but there was no official archdiocesan celebration before,” said Vega. “But I remember that when I was in the seminary in the 1990s here in Los Angeles, we would be asked to bring portraits of relatives and we would make altars around All Souls’ Day.”

The altars are particular to the Mexican celebration, but other Latin American Catholics have their own way of remembering the departed. Wilmer Perez said that in Guatemala, many attend Mass Nov. 2 and visit the cemeteries where their loved ones are buried.

Roberto Rodríguez, from El Salvador, said that in his region of the country people get together around the tomb of the loved one to share a meal he or she would have liked, and to tell stories about that person.

Altars are not part of the traditions of their respective countries, but both Central American men, who live in Los Angeles, participated this year in building one.

Together with other Spanish-speaking parishioners from St. Charles Borromeo in North Hollywood, they built an altar to remember the Central American children who have died crossing the desert into the United States or while in federal detention.

The altar is one of more than 50 that will be on display at Calvary Cemetery Nov. 2 in East Los Angeles for the Day of the Dead celebrations. In this case, the altar tradition is used to depict a painful reality, to educate other community members, and to honor the children, said Carlos Castillo, a Guatemalan immigrant who is part of a group of 15 faithful that created it. In the lyrics of a “corrido” (a Mexican-style narrative ballad) co-written by Castillo and musician Prudencio Perez (also from Guatemala), Castillo prays for the children who have died but also those in detention, and expresses hope for immigration reform “to keep these tragedies from happening.”

In this context, the celebration serves as a collective prayer by immigrants from several countries to address an issue of interest to the community.

Sandra Martinez, a Mexican immigrant who attends St. Charles Borromeo Church, explained that she has always seen this tradition as a mix of the cultural and the religious. “It is a combination of all the elements,” she said during a recent interview at Calvary.

Standing next to her, Candelaria Castillo explained that at their parish, the small group of Latino parishioners “build an altar and we bring our family photos, and we pray the rosary for the unborn and all the children who have died.”

The Day of the Dead is much more than a colorful cultural expression, said Vega.

“In Mexico, the Day of the Dead is very spiritual,” he explained. “People go to the cemeteries, attend Mass.”

Thanks to the recent Disney film “Coco,” there’s been a broader popular understanding in the U.S. of the feast as a celebration, Vega said. Still, “in the indigenous areas you can see there is more of a solemnity to it, a spiritual practice with the rosary, the candles, and the celebration of Mass.”

Throughout the rest of Latin America, it is very common to see families visiting the cemetery year-round during any significant dates of the departed.

At Calvary Cemetery on a recent weekday morning, several groups of families sat around cleaning the tombstone of their family member, placing flowers or simply chatting among themselves.

Several tombs were adorned with balloons, flowers, and plastic decorations to celebrate a birthday, or the arrival of fall, even a giant teddy bear to remember someone who passed young. 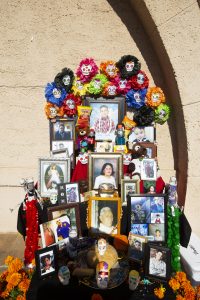 One of the many altars at Calvary Cemetery. (Victor Alemán)

Families will start building altars and adorning their family plots in ways that aren’t common during regular times of the year, said Brian McMahon, director of outreach for the archdiocese’s Catholic Cemeteries department.

“I love to see the families planning their altars,” said McMahon.

“It’s nice to have a celebration where people can express themselves in ways that are special. From our first celebration, the reaction has been extremely positive.”

McMahon enjoys seeing visitors place pictures of their loved ones on the community altar throughout the day and driving families in a golf cart to their cars when the day ends.

“That way I can hear them say how much they enjoyed it,” he added. “It’s something I love personally.”

A few days before the main event, about 200 third- and fourth-graders from local Catholic schools are invited to the cemetery grounds for a catechetical day and to build their own altar.

“We talk to them about it from the Catholic context and the cultural one, but their presence in the mausoleum chapel lets them know it’s cool to be in the cemetery; it’s not a ghoulish place but a solemn one,” said McMahon.

“It’s very important to have students involved, to learn the true meaning of the tradition,” said archdiocesan Chief Communications Officer Carolina Guevara, who spearheaded the creation of the celebration several years ago. “It is really a celebration of life.”