Announced August 3, the $2.5 million award will support Homeboy’s current initiatives, including their jobs fund, a youth re-entry center, Homeboy Art Academy, and the Global Homeboy Network. Homeboy also plans to expand their transitional housing offerings in “Hope Village,” an urban campus that offers a safe place to those in need.

The Hilton Humanitarian Prize is the world’s largest annual award granted to non profit organizations that have made extraordinary contributions in alleviating human suffering. Homeboy Industries is the 25th recipient of the award.

“The Prize recognizes our 32-year journey in the service of compassion and healing for our most vulnerable populations in Los Angeles, and role as a global model for change by standing with those on the margins,” founder Father George Boyle, S.J. wrote in a letter announcing the award. “This Prize acknowledges the courage of every woman and man that walked through our doors seeking to transform their lives.” 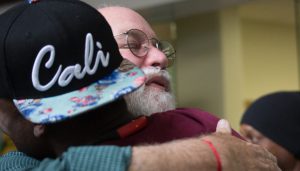 Since 1988, Homeboy Industries has given gang members and incarcerated men and women a chance to work, find safe housing, and make a new life. Their future vision, called “2030 Ambition,” seeks to change the way the world views and treats those on the margins of society.

“During this unprecedented time marked by a pandemic and great movement toward social justice, we are emboldened that our work together is more paramount than it has ever been,” Father Boyle wrote.