For Tom Vozzo, taking an unpaid role in the nonprofit world 10 years ago was a complete reversal from the rules and expectations he lived by during a 26-year career overseeing multibillion dollar companies.

But as he watched the rehabilitation of LA gang members passing Father Greg Boyle’s Homeboy Industries, Vozzo experienced a parallel spiritual journey. He says it led him to realize there can be a better path toward how a business can operate — not based so much on meritocracy, but something he calls “Economic Equality Capitalism”: a model that can satisfy investors and improve the lives of its workers previously thought to be unemployable.

Since 2012, Vozzo has served as Homeboy’s CEO. The lessons learned during that experience are documented in a new book, “The Homeboy Way: A Radical Approach to Business and Life” (Loyola Press, $26.99), released in February.

Angelus caught up with Vozzo, a parishioner at St. Maximilian Kolbe Church in Westlake Village, for insights on how he stabilized the business end of this well-known mission-based program that started under Father Boyle in 1988 at Dolores Mission Church in Boyle Heights. 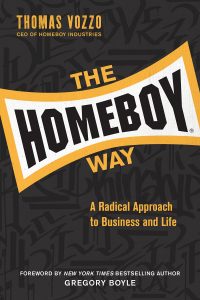 In your new book, you write that Homeboy is not a religious organization. Father Greg is a Jesuit priest, but there is no institutional Church funding and very little from local government resources. How does that dynamic work for your business and mission?

By nature, I don’t think people assume the Catholic Church has all this money they can donate to all these organizations. They support them in other ways. We have three Jesuit priests on our staff that we pay (in addition to Father Boyle, there are Father Mark Torres and Father Frank Buckley) and our 190 paid staff plus another 350 paid trainees.

So the key part is when people visit and walk through the doors, you get a sense of the vibe and energy and see how people lean into their own faith. All of the sudden, people don’t see it as a religious place as much as they do a spiritual place. That’s the draw.

How did Homeboy survive COVID-19?

From a people perspective, we were an essential business early on. We had only one week of being off and kept the doors open as a sanctuary for our folks.

But for our population, the amount of gun violence, drug overdoses, domestic abuse … we’ve lost more people than ever before, not just from COVID. It was that sense of hopelessness.

From a donation standpoint, many have really reached deep into their pockets and helped because I think they see us as credible practitioners. We have helped people on the margins of our society because what COVID has shown is we have a lot of people who are homeless, food insecure, and a lot of people who need a chance.

At one point in 2010, you say Homeboy was on the verge of failing, running a $2 million deficit each year. Now it has had nine years of positive operating income and still helps more than 40,000 people in the community. How do you get everyone to understand that without the business side, the mission side won’t make it?

So I’m coming out of the one extreme of a business side that never talks about faith, and even 10 years later, I still get nervous talking about it. Something inside says, no, you’re a corporate guy!

Then there are folks on the far other side, the faith aspect. Father Greg agrees; we have to wear both hats. We’ve got to do margin and mission. We want to be here two years from now, five years from now, and these are the things we need to do to make that happen. 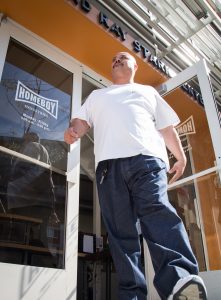 A trainee walks out of the Homeboy headquarters office. (Homeboy Industries)

What makes you feel comfortable enough in the Homeboy culture to make these suggestions to corporate America about ways to change their policies and address those on the margins?

What’s wonderful about the Homeboy experience is there’s no “us” and “them,” just us, as Father Greg says. Even a guy like me who knows nothing about gang life has been taken into that community. I feel a kinship with many of the people there.

Two things drove me to do the book: One, if I was ever to go back into the for-profit world, what would I take back with me? But the other thing that drove me were my frustrations about seeing the struggles with those on the margins and how our society sets up so many hurdles and never really gives them a shot. The poverty rate in America has been the same for 45 years. We have to do something different.

Homeboy is a way of lifting people out of poverty and moving their lives forward. To me, it’s trying to bring voice and witness eyes to those struggles and then have the community that I come from step up; there’s action we can take to make a difference. And not have that scenario play out for the next 45 years.

When you took the Homeboy CEO role, you say it was an act of faith, but not one so much in the spiritual sense. How did faith work then and what does faith mean to you now?

For me, Homeboy Industries has helped in so many ways but it really launched me on my own faith journey. Yet, I didn’t realize that was happening to me. Here I am, a for-profit corporate world CEO in a $1.8 billion business. And in this business world, you don’t talk about your faith or spirituality, never mention God. But I left that world seeking another chapter in my life. In reflection, I was looking for a more faith-oriented chapter. I just wanted to be around people I could help. It was a calculated risk.

Something drew me to Homeboy and Father Greg, and all around me are people with deep faith. And I can see their lives changing in a positive way in that context of being in a spiritually sloped environment. Learning from them and seeing how they were more comfortable talking about their faith has pushed me. 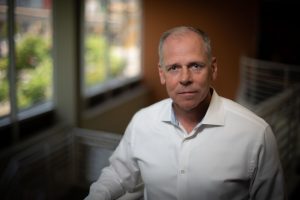 You’re a parishioner at St. Maximilian Kolbe in Westlake Village, and also familiar with Jesuit spirituality. How did your personal faith guide your decision to make this career change?

Clearly, St. Max as my church is very supportive. But being around Father Greg helped a lot. Since he travels a lot, our deeper conversations end up more on email than face-to-face. I would often ask Father Greg spiritual questions about God or Catholicism or the Jesuits, and he very generously always answered.

At some point, he set me up with a Jesuit spiritual director. It was a very uncomfortable thing for me to try. But that really put me on the journey. I just finished Ignatian Spiritual Exercises, a six-month progress, that’s really got me deeper into my understanding of God and Jesus, way more so than at anytime in my whole life.

So why did I do that? Because I recognized the homies at Homeboy knew more about the depth and meanings of the Bible than I did. It was finally: C’mon Tom, wake up! The Daily Examen also gives me more balance and perspective, asking God for strength and grace, being thankful for the people around me. It’s almost become my theme: Listen, I’m a cradle Catholic and think of myself as pretty typical in that sense. But if I can learn all this at a later age, come on folks, you can do it too.