During his nearly 15 years in Southern California, Father Moses Chikwe was always up to something, even when he wasn’t taking graduate courses at Loyola Marymount University and UCLA.

The Nigerian priest helped in parishes, visited the sick in local hospitals, served as a prayer group chaplain, and joined soccer matches after Sunday Masses were done. He even handed out rosaries to strangers on the Venice Beach boardwalk.

So when news reached California that Father Chikwe, now an auxiliary bishop in the Archdiocese of Owerri, Nigeria, had been kidnapped along with his driver Dec. 27, he had an extensive network of old friends praying for his release.

“I feared for the worst. I couldn’t sleep,” recalled Patrick Chikwe, a nephew of the bishop. The younger Chikwe, who joined his uncle in California eight years ago and today teaches at an LA area high school, knew who to call first when he got the news.

“Everybody we asked started prayer chains like crazy,” said Gary Micaletti, who became friends with “Father Moses” during his time at the Church of Saint Mark in Venice.

Former parishioners from St. Mark and parishes in San Diego where he served spread the word. Family members, prayer groups, and convents, including the Carmelite Sisters in Alhambra, were quickly mobilized to pray. Nigerian priests serving in the Archdiocese of Los Angeles were on the phone with updates.

Their efforts were not in vain. Five days after Bishop Chikwe and his driver, Ndubuisi Robert, were abducted, the Archdiocese of Owerri announced Jan. 1 they had been released “unhurt and without ransom.”

Owerri Archbishop Anthony Obinna, who visited the 53-year-old Bishop Chikwe soon after his release, said he was “looking and feeling very weak from the traumatic experience.” A video circulating on social media later showed Bishop Chikwe celebrating with well-wishers, dancing in his white bishop’s cassock and flashing that trademark bright smile.

“He was famous for that smile,” said Father Michael Rocha, who was pastor at St. Mark during Bishop Chikwe’s time there. “He was always happy. That smile, and that laugh — that’s what endeared him to people here.” 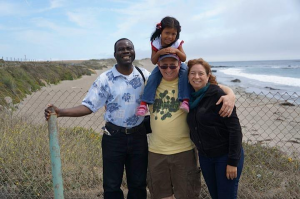 He first arrived in California in 2002, when his home diocese in Nigeria sent him to Loyola Marymount University to study educational administration. He first took up residence at Visitation Church, just blocks from the school’s campus in Westchester.

Esteban Hernandez, then a middle-schooler at the parish school, remembered how easily the young priest connected with students, despite his heavy accent and being new to the country.

“He was just a lovely guy to be around,” Hernandez recalled. “You felt like you could always approach him on the schoolyard during recess or after Mass and talk about anything.”

After getting his master’s at LMU, he stayed to pursue a doctorate in education at UCLA. He briefly lived on the school’s Westwood campus, until Father Rocha offered to put him up at St. Mark. He did not have to be asked twice.

“He had that type of outgoing personality,” remembered Father Rocha, now pastor of St. Paschal Baylon Church in Thousand Oaks. “He wanted to be back in a parish, and people embraced him and welcomed him.”

During his five years in Venice, he helped as a hospital chaplain and ministered to the parish’s Legion of Mary as spiritual director. It was there that he grew close to Gary Micaletti and his wife, Cynthia, whose daughter he baptized. The Micalettis considered him part of their family, inviting him often to join them for dinner and excursions to the California missions.

Once the Micalettis took him to Universal Studios, where Cynthia convinced him to get on the Mummy ride. They recalled with a laugh that he promised he’d never trust her again.

“Everybody who meets him knows he’s a very humble man, just a beautiful-hearted man,” said Gary.

In 2011, he moved to San Diego while completing his doctoral studies. He served there at St. Joseph’s Cathedral downtown and at St. Mark’s in San Marcos, while also serving as chaplain at the local veterans’ hospital.

The friendships he formed with the Micalettis and former parishioners have survived the test of time — and distance. Even after receiving his doctorate in 2013 and going home to direct Owerri’s religious education office, he would come back during summers to help out at St. Mark’s Church in San Marcos and St. Paschal Baylon Church in Thousand Oaks.

His friends told Angelus that he always brushed off suggestions that he might one day move up in the Church’s hierarchy. But in late 2019, their predictions proved true when Pope Francis named him auxiliary bishop of his home Diocese of Owerri, in southeastern Nigeria.

“Several times I said, ‘Moses, I'm telling you right now, eventually you’re going to become a bishop.’ He would howl and laugh and say, ‘Absolutely not.’ ”

“He just had that pastoral presence and love of the faith, and an ability to get the people around him,” said Rocha. “I think that's what a bishop is called to do.” 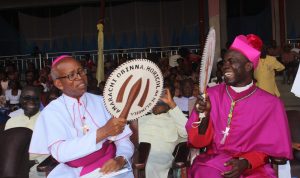 Bishop Chikwe’s new assignment meant taking up a shepherd’s role in one of the most dangerous places in the world to be Catholic.

Of the more than 4,000 people Christians killed for their faith around the world in 2018, about 90% were from Nigeria, according to the aid group Open Doors.

Since the election of President Muhammadu Buhari in 2015, the security situation in Nigeria has deteriorated, said Father Chidi Ekpendu, a Nigerian priest who serves as a judge in the LA archdiocese’s marriage tribunal.

While there has been a recent uptick in priests being seized for extortion, the kidnapping of a bishop is “unprecedented,” Father Ekpendu told Angelus.

“There is a lot of confusion,” said Father Ekpendu, whose home diocese of Aba neighbors Owerri. “We have to say it the way it is: There has been a complete breakdown of law and order in the entire Nigerian state. People live in fear all the time.”

Christians have borne the brunt of the suffering under Buhari’s rule. The former army general, who ruled as military head of state from 1983 to 1985, has been accused of empowering Islamic terrorists targeting Christians.

News of Bishop Chikwe’s kidnapping came as a shock to the Micalettis, who had exchanged virtual  messages just two days before on Christmas.

Bishop Chikwe was well aware of the dangers of being a priest in Nigeria, but always expressed calm when asked about the situation there, the couple recalled.

“He would always say that the more responsibilities you have, the more you need to pray,” said Cynthia.

Questions about who kidnapped Bishop Chikwe and his driver and how they were released remain unclear. In a message to Father Rocha a few days after his liberation, Bishop Chikwe said he was “gradually healing” from the experience and asked for prayers, but didn’t offer many details about the ordeal.

Patrick, who described living the agony of his uncle’s kidnapping here in LA as a personal “nightmare,” has not heard who was responsible, either, but added that upticks in crime in the area are common during the Christmas holidays.

And while he’s sure all the prayers helped, Father Rocha also likes to imagine Bishop Chikwe’s smile — and his laugh — winning over even the meanest of kidnappers.

“Being who he is, I wouldn't be surprised if he just convinced them to let him go.”