If you want to make the pope’s astronomer smile, ask him how to detect the presence of God with the most well-known tool of his trade.

“One doesn’t use a telescope to discover God,” said Brother Guy J. Consolmagno, S.J., the director of the Vatican Observatory, during a virtual presentation to a group of more than 100 Loyola Marymount University students, faculty and alumni on March 11.

“But what one does do,” he continued, “is to use a telescope to get to know God’s personality better.”

Consolmagno, a man with a prayerful demeanor and a playful personality, was invited by Loyola Marymount University’s Frank R. Seaver College of Science and Engineering to speak as part of the Jesuit university’s ongoing Seaver Spotlight series.

For an hour, participants heard him explain how a passion for astrophysics and the evolution and origin of small bodies in the solar system can live in harmony with the Catholic faith.

From his office at the Vatican Observatory facility atop Mt. Graham in southwest Arizona, Consolmagno may have quickly enlightened the group in showing there can be an official place of advanced technology under Pope Francis’ watch that doesn’t have to exist exclusively in Italy (although there is an observatory there as well).

Framing his talk as “Your God Is Too Small,” Consolmagno could use the recent events of NASA’s Perseverance rover collecting new data on Mars as an entry point to re-conceptualize a far off planet as a real place that looks very much like the planet we live on, where “we can go and have adventures … a place where we can live… a place with sunrises and sunsets.”

Relying on an array of colorful photographs of various scenes in space, Consolmagno borrowed lines from Saint Francis of Assisi’s “Laudes Creaturarum,” also known as the Canticle of the Sun, as the captions for those moments captured. 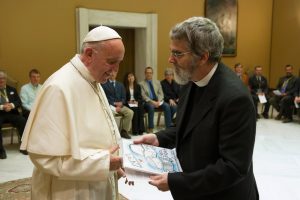 The presentation generated a sense of awe that may have set aside any intellectual debate about how one could otherwise reconcile the Big Bang Theory with the Genesis creation narrative.

“God made it and God found everything good -- that’s the part missing from the scientific cosmology if you’re left only with equations,” Consolmagno said. “But that’s why we do the cosmology. Because God made it, it’s a way of getting closer to God and this universe is good and beautiful, not just the sunset, but all the equations that describe the sunset.

“What does it mean to be a fellow creature in such a huge creation?” he also asked, showing a photo from the Arizona telescope at a cluster of galaxies. “Every swatch of light is billions of stars with tens of billions of planets and hundreds of billions of such galaxies that we can see. To take that all in requires religion. I maintain that science requires religion, and not every religion allows science.

“It is only when we embrace cosmology with our entire soul, both our reason and our heart, that we actually can find God in that cosmology. And if you don’t use both, then your God is too small.”

Consolmagno pointed out that Genesis contains the three axioms of science based in religion: The universe is real, it follows laws and it’s worth spending our time getting to know.

“Genesis is more about the creator than the creation, taking the best science of its day 2,500 years ago with the Babylonian creation story, and the Jewish authors tell us that God is already there, not a nature God, but outside of space and time,” said Consolmagno, a Detroit native with a Masters from the Massachusetts Institute of Technology (MIT) and a PhD from the University of Arizona.

“God orders us to be astronomers. And any other sort of person who interacts with the universe and pulls ourselves out of that tiny cosmos we have in our head to recognize an Earth much bigger than the cosmos.” 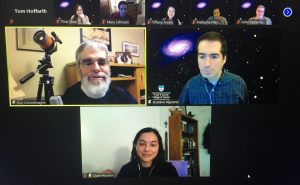 Consolmagno, who has an asteroid named for him by the International Astronomical Union in Paris, said the joy he has returned to in scientific pursuits is where he finds God in his work. It is where he said one emphasizes the starting point of using axioms in an intellectual process of proving or disproving a scientific theory.

“God is one of the axioms that I always start with,” he said. “If I believe this universe is going to be logical and beautiful and worth studying, then I will start the chain of trying to understand it and the universe of seeing God. I can’t turn it around the other way.”

He embraces the fact that the Vatican Observatory remains one of the oldest astronomical institutes in the world, going back to 1582 when Pope Gregory XIII formed a committee to study scientific data in reforming the calendar. The first observatory was founded in 1891 by Pope Leo XIII.

Gustavo Vejarano, who teaches electrical and computer engineering at LMU, invited Consolmagno to speak. He believes that with university graduates going on to work at local aerospace firms like SpaceX, Raytheon and Northup Grumman, there is a greater need to revisit these upgraded science-vs.-religion questions — and it’s made him think more about what his own Catholic identity within an academic structure like LMU’s should look like.

Vejarano has recently been working with students on a project that involves the creation of cubeset satellites that are sent along with supplies to the International Space Station and from there launched into orbit.

“If we’re at a point in time when we’re considering going to Mars, what does that mean for humanity?” Vejarano asked in a separate interview with Angelus News.

“Much of our thinking is in short-term portions: How do you launch a rocket? I would like to address more about long-term effects that, if we are created in the image of God, what happens if there is another type of life out there? Does this challenge our belief system or reinforce it? If the United States now has a Space Force, and countries such as China and Russia are planning more space exploration, humanity has to look at questions like this.”

Note: The virtual presentation will be uploaded to the Seaver Spotlight series website.