In the Philippines, September is celebrated as a catechetical month, in honor of San Lorenzo Ruiz de Manila, the first Filipino saint and martyr. So it was only fitting that Filipino Catholics in Los Angeles came together on the last weekend of the month as “catechists to others” in celebration of Ruiz’s life.

The 14th annual Feast of San Lorenzo Ruiz de Manila, hosted by the San Fernando Regional Filipino Ministry of the Archdiocese of Los Angeles, was held at Incarnation Church in Glendale on Saturday, Sept. 24.

Bishop Roberto Mallari celebrated the Mass, assisted by priests from the Archdiocese of Los Angeles and the Philippines. (Lynee Lamiel)

Joining over 500 Catholics was Bishop Roberto C. Mallari, D.D., from the Diocese of San Jose Nueva Ecija in the Philippines. He celebrated a special Mass in honor of St. Lorenzo, beginning with an outdoor processing and rosary, and a liturgical dance by the Dancers for Jesus, Mary, and Joseph. 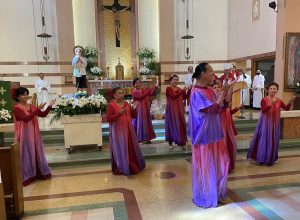 The Dancers for Jesus, Mary, and Joseph performed at the celebration. (Lynne Lamiel)

St. Lorenzo Ruiz de Manila was born in Manila in the 1600s. Raised by Christian parents, he joined the Dominican Confraternity of the Holy Rosary as a young man. But when he was accused of murder, he had to flee Manila to Japan with a company of Dominican priests.

In Japan, Lorenzo was arrested as a Christian and suffered great tortures before being sentenced to death. In 1987, St. Pope John Paul II canonized Lorenzo and his companions as martyrs for the faith.