For Filipino American nurses on COVID-19 front lines, faith is stronger than fear

When the coronavirus (COVID-19) pandemic first hit Los Angeles earlier this year, Kim Hernandez offered to serve on the frontlines. As a 30-year-old registered nurse at Ronald Reagan UCLA Medical Center, she volunteered for the hospital’s COVID-19 team and became a nurse case manager for patients who had recovered and were on their way home.

One of the toughest parts of the job, she said, were all the unknowns surrounding the disease — how to prevent it, how to treat it, who survives it and who doesn’t — and not having easy answers for fearful families whose loved ones were admitted to the hospital.

Despite the risks to herself and her own family, Hernandez, who was born in the Philippines and immigrated to the U.S. nine years ago, said it was critical for her to do whatever she could for vulnerable patients as COVID-19 case numbers began to climb.

“The very nature of our profession, being a nurse, means it’s a moral and societal obligation for us to step in and help people who really need it at this time,” said Hernandez, also a parishioner at St. John Baptist De La Salle Church in Granada Hills.

Then Hernandez got COVID-19. 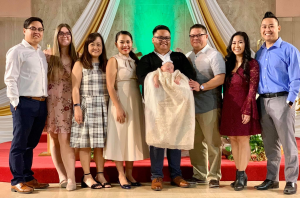 Kim Hernandez (fourth from left) with her husband Chris and family members at the baptism of her daughter, Chloe, at St. Catherine of Siena in Reseda. Kim, Chris, and her brother-in-law Anthony (far right) are all nurses. (Submitted photo)

At the time, six adults were living in her household — Hernandez, her husband, mother- and father-in-law and two brothers-in-law — plus her infant daughter. Three of them are nurses. All six got COVID-19.

She said they don’t know who was first infected with the virus and brought it home, and they’ll probably never know. But with three nurses in the family, they understood their risk of contracting the disease was always going to be high. Once they experienced symptoms, the six adults isolated separately for one month.

But she said falling ill has only helped her become a better nurse.

“Now that I myself have experienced the disease, I know how families feel when their family members are in the hospital and they don’t know when they’re going to go home or if they’re going to get better,” she said. “I feel that I’m in a perfect position to be able to help people, not only because I can, but because I have walked the walk.”

Hernandez is among the estimated tens of thousands of Filipino nurses working on the front lines of the coronavirus pandemic across California. According to a 2016 survey by the California Board of Registered Nursing, about 18% of the state’s nurses are Filipino, a proportion that is likely even greater in the Greater Los Angeles area, which is home to the largest Filipino population in the U.S., most of whom are Catholic. 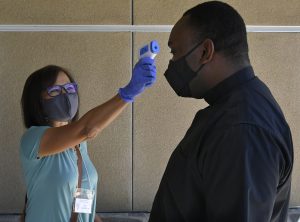 This high concentration of Filipinos in nursing means that amid the pandemic, the Filipino community is not only disproportionately serving on the front lines, but is also disproportionately at risk for contracting the virus and passing it on to their families.

“There’s tremendous grief as well as respect for our Filipino American nurses who are on the front lines and really sacrificing their lives and well-being, as well as the well-being of their own families, to care for us,” said Catherine Ceniza Choy, professor of Asian American and Asian Diaspora Studies at the University of California, Berkeley.

The reason California has so many Filipino nurses today can be traced back more than a century, to the American colonization of the Philippines from 1898 to 1946, said Choy, also author of “Empire of Care: Nursing and Migration in Filipino American History.” 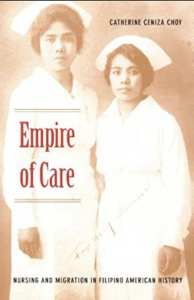 During this time, the colonial regime created Americanized hospital training programs to produce Filipino nurses in an educational system modeled after the one found in the U.S.

While the U.S. didn’t design this system with the intent of bringing these nurses to work back home, that’s what ended up happening, said Choy. An increased need for nursing services, thanks to the introduction of Medicare and Medicaid, as well as social movements allowing women to pursue professions outside nursing, led to nurse shortages across the U.S., she said.

This, in combination with the immigration reform of 1965, which opened the country to people from non-European countries, meant that many U.S. hospitals started turning to the Philippines for nurses and other health care workers, who were particularly well prepared to directly enter the U.S. workforce, said Choy.

In the decades since, the need for foreign-trained nurses hasn’t gone away, so U.S. hospitals have continued to recruit nurses from the Philippines. In addition, many in the second and third generations have followed their family members into nursing, said Choy, which is seen as a noble profession and a path to socioeconomic mobility.

“We’re seeing a reliance on foreign-trained immigrant health care workers on the front lines of COVID-19 today,” said Choy. “There is a history to what we’re seeing, and what we’re seeing regarding the disproportionate impact of COVID-19 on the Filipino American community is an outcome of that history as well as current events.”

For many Filipino nurses, battling the pandemic has been a harrowing experience.

Melanie LaMadrid, a nurse in the intensive care unit at Providence Holy Cross Medical Center in Mission Hills, said the severity of COVID-19 is unlike anything she’s seen in her more than 20 years working as a nurse. Patients typically come to the hospital when they’re having trouble breathing and hospital staff manage them with oxygen for as long as possible.

When that’s not enough, they’re transferred to her in the ICU and put on ventilators. At that point, only half survive, she said. Even those who do make it have a long road to recovery and often have to to learn how to walk and eat again, she said.

But the hardest part as a nurse, she said, is seeing the isolation these patients experience. The hospital doesn’t allow visitors, and health care workers are covered in personal protective equipment, making it difficult to comfort and communicate with patients. 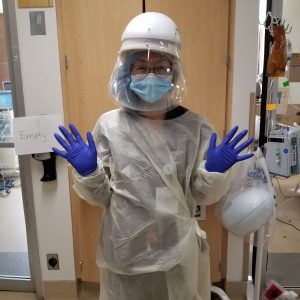 “They’re just there fighting it alone,” LaMadrid said. “We’re holding their hands, we’re trying to stay with them. They’re scared. They don’t want to be alone. We have to somehow show empathy and show them that we care and that we’re here to support them and that we’re trying to get them better; all through just our eyes is hard. When I’m smiling, they can’t see me smiling, they can’t see me worrying for them.”

LaMadrid also contracted COVID-19 and has been quarantining at home since the beginning of June. Even though her symptoms have been mild, she said it was frightening to wonder if and when her condition would worsen. Now that she has mostly recovered, LaMadrid, a parishioner at St. Kateri Tekakwitha Church in Santa Clarita, said she wants to donate blood so that her antibodies can be used to treat other COVID-19 patients.

The pandemic has also taken an emotional toll on many nurses. Vangie Libatique, a 20-year veteran nurse who works in the ICU at a hospital in Woodland Hills said that part of her job now is encouraging other health care workers to stay strong despite their fear.

“I have nurses changing in the locker room and they’re crying,” said Libatique, a parishioner at St. Catherine of Siena Church in Reseda.

“They’re crying because they love their family and they’re so afraid. I am so afraid too, but I’m also not afraid because I know that God is with me. I keep encouraging my co-workers, I will hug them and say, this will pass. I realized that having faith is very important because it gives you this tool not just to do your work as a nurse, but also to give empowerment to other nurses who need it.”

At home, she said she and her family sing and play musical instruments to help cope with the stress of the pandemic. They also pray the rosary together at night.

Libatique said she hasn’t gotten COVID-19, but some of her relatives — she has 10 nurses in her extended family — have fallen ill and passed the virus along in their households. When the pandemic first hit, she debated what to do — protect herself and her family by staying home, or continue working.

But as she prayed on it, she said she was reminded that nursing wasn’t just a job to her, it had become a calling. And Filipinos, she noted, tend to draw from a particular kind of strength in such times.

“The resilience of Filipinos helps a lot in the medical field,” she said. “We are hard workers. We are dedicated people. And we love to help. That’s our nature.”

Even outside hospitals, many Filipino nurses are working to care for their communities.

When St. Kateri reopened at the end of May, Cielly Unite-Pagador, a retired nurse and member of the church’s pastoral council, coordinated nurses and other medical staff from the parish to conduct health screenings before Mass. 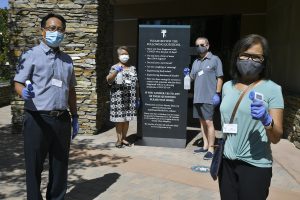 Now, nurses check temperatures, provide hand sanitizer, and conduct brief interviews as people walk into the church. Inside, worshippers are only allowed to sit three to a pew — or one family — in every other pew, and the building’s capacity has been reduced from 1,400 to 100.

Since the reopening, Unite-Pagador said the nurses’ roles have evolved. Now they also make themselves available after Mass so that parishioners can ask them questions about COVID-19 and get health advice on any other areas that they’re concerned about.

Meanwhile, Hernandez, the nurse at UCLA, said her family is still battling COVID-19.

She, her husband, father-in-law and two brothers-in-law have all recovered and her infant daughter never got sick. But her mother-in-law has had a tougher road. She was admitted to the hospital and physicians repeatedly warned the family that she might not survive.

While she was in the hospital, the rest of the family couldn’t visit her, and couldn’t even be with one another to grieve, since they were also recovering and quarantining separately.

To stay emotionally and spiritually connected, the family organized daily Zoom meetings to pray the rosary together. Hernandez also gathered her own side of the family over Zoom to pray a daily rosary for her mother-in-law and everyone else who was sick.

“I would cry nonstop and in all honesty, I had given up a lot of times,” said Hernandez. “Because I’m a nurse, I know what to expect. I know if a body does this, expect this.”

Despite what the doctors said, Hernandez's mother-in-law did survive. She still hasn’t fully recovered, and remains in the ICU, but Hernandez is optimistic about her condition.

The experience has only strengthened Hernandez’s resolve to continue serving as a nurse.

“Now more than ever we are all motivated to help people through our profession as a way of giving back to the Lord on the grace that he gave to us,” she said. 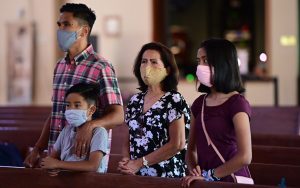 Caitlin Yoshiko Kandil is an award-winning reporter and graduate of Harvard Divinity School whose work has appeared in the Los Angeles Times, nbcnews.com, Religion News Service and other publications.