Juan Carlos Lopez paused to run his fingers lightly over a wooden rosary draped over a framed photograph of his nephew, Hunter Lopez, who was dressed in his formal Marine Corps uniform.

It was there, during those moments of quiet, that Juan Carlos and his family could process all the intimate, familiar details of this expansive “ofrenda” (“offering”): two crossed Star Wars light sabers, a soccer ball, a box of Fruit Loops cereal, all arranged on a camouflage-pattern blanket. An American flag was draped under the floral archway of traditional orange and yellow marigolds.

The altar, created days earlier by friends and family of the fallen soldier, was featured at the annual “Dia de los Muertos” (“Day of the Dead”) prayer vigil in the mausoleum courtyard at Calvary Cemetery in East LA, celebrated virtually the evening of Nov. 1.

Among the handful of in-person guests at the vigil were family and friends of Hunter Lopez, a 22-year-old Marine corporal who was killed in Afghanistan on Aug. 26. Lopez was one of 13 U.S. service members killed while helping Americans and Afghans escape a Taliban suicide bombing attack at the Kabul Airport during the final days of U.S. military withdrawal from the country.

“It’s a mix of sadness and happiness, but I’m most happy because I know all of this — that’s Hunter, all his favorite things in one place and it gives me comfort to see that,” said Juan Carlos, who drove from West Covina with his wife, Myrna, and children Ethan and Brianna — Hunter’s cousins — parishioners at St. Martha Church in La Puente.

Over the previous several weeks, the Lopez family have been taken in various directions for memorial tributes, governmental proclamations, and local fundraising initiatives. A three-day procession in September included a funeral Mass at his parents’ home parish of St. Francis of Assisi in the desert city of La Quinta, where Hunter and his younger brother and sister received their first Communion and confirmation.

He planned to work for the Riverside County Sheriff’s office following his deployment to join his father, Herman, and mother, Alicia, who are a captain and deputy, respectively, in that department.

Because Hunter’s parents were not able to attend the “Dia de los Muertos” event, it made it all the more important for Juan Carlos, Herman’s youngest brother, to be there. Still, Juan said he was inspired by the efforts of his own parents, Carlos and Helen Lopez, who found solace in the cathartic process of collecting and arranging items for the altar.

“It is still very difficult and it will take a long time to settle down and deal with all the sadness — there are too many recent experiences about him and it has been hard,” said Helen, speaking in Spanish and translated through Maria Acosta, Hunter’s great aunt.

“But we are very content and happy this is all being done,” Helen added.

Both Helen and Carlos, Los Angeles residents who attend St. Thomas the Apostle Church near Koreatown, said they feel close to him always by wearing a dog tag created by the soldier’s father with Hunter’s photo on one side and his name, rank, death date, and age on the other.

The two shared stories of how Hunter enjoyed her special potato salad; how he was always asking questions: about his family history, about his culture, and about his own past. 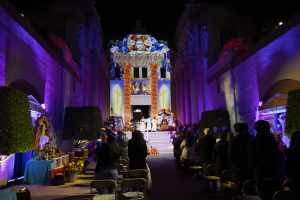 Maria Acosta, who works in the Archdiocese of Los Angeles’ Office of Religious Education, has helped construct “Dia de los Muertos” altars at Calvary each year since 2014. The display at the East LA cemetery typically features dozens of altars, but this year it was condensed into five, among them tributes to those who have died from COVID-19 and missionaries killed in 2020.

Acosta said the tragedies of the past year were an opportunity to educate about the healing that traditions like mariachi music and traditional folk dancing can help bring amid grief.

“I’ve seen how very broken Hunter’s grandparents have been, and I particularly wanted to bring them here to help get some kind of family closure with an activity they could relate to,” said Maria, a parishioner of Cathedral Chapel of St. Vibiana in mid-Wilshire.

Maria said she knew Hunter well as a boy, but this year’s “Dia de los Muertos” gave her the chance to “have a closer relationship with him through doing this.”

Hunter joined the Marines three months after graduation from La Quinta High School in 2017. He served four years in the Marines before his death, first with the Fleet Antiterrorism Security Team Company A and most recently in the 2nd Battalion, 1st Marine Division. Born in Palm Springs, he was buried at Riverside National Cemetery.

Congress’ House of Representatives recently approved a bill to grant the Congressional Gold Medal to Hunter and the other 12, which included Lance Cpl. Dylan Merloa of Rancho Cucamonga and Lance Cpl. Kareem M. Kikoui of Norco. They were posthumously awarded the Purple Heart in September.

The Nov. 1 evening “Dia de los Muertos” vigil was followed by a Nov. 2 morning All Souls’ Day Mass at Calvary Cemetery and Mortuary, both officiated by Archbishop José H. Gomez and hosted by Catholic Cemeteries and Mortuaries of the archdiocese.

“On this evening we pray for all our faithful departed, all those loved ones who have gone before us,” said Archbishop Gomez at the vigil. “Especially in our families. They have left us. We can’t see them anymore. We can’t touch them anymore. We miss them. This can make us sad. Like there is a hole in our hearts that we know we cannot fill.