Coronavirus, cancer, and that old calendar

Like many, I have used a little of this forced isolation during the coronavirus crisis to clean out cabinets and files. Some of the things that I have saved over the years are surprising, some are perplexing and others are rather moving.

One article I found in my desk drawer that would fall in the last category is an old calendar. I haven’t saved hard copies of calendars since I started using Microsoft Office, so it is unusual to be in its own file.

To look at it, one would not recognize what it is: It is not even a full calendar year, a printout of the months July 2008 through December 2008.

But this one has special meaning to me. Each day has an orange highlighter “X” through it. At two-week intervals in red and circled are the words “Chemo 1,” “Chemo 2,” and so on to “Chemo 6,” until the end of November when it begins a countdown of “Radiation 1-25.” Scattered through the pages are a number of “Pet Scan” notes, and “Rituxan” appointments, but it is the orange X’s that are meaningful.

In 2008, I was treated for Stage III, Diffuse Large B Cell Lymphoma. I had treatment over the course of three years but those six months from July through December of 2008 were the difficult ones. The X’s are not really X’s at all. They are hash marks, marking time. The forward hash mark means that I made it through the morning; backward, I made it through the afternoon. It was like a prisoner marking the days of his confinement on the cell wall. It was an act of defiance; one day, two hash marks. Cancer had lost out. I had made it. One more day. 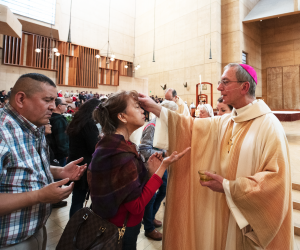 Auxiliary Bishop Marc V. Trudeau anoints a woman at the World Day of the Sick Mass at the Cathedral of Our Lady of the Angels Feb. 8, 2020. (Victor Alemán)

But the truth is that I hadn’t really done anything. I always say that even with the best medical support and personnel and the right kind of drugs, every cure is a bit of a miracle. During my illness, it was not my marking of a calendar, but the grace of God and the prayers of so many of my friends that carried me through. Those hash marks are witnesses to what others did for me. I didn’t do a thing.

Now it is my turn. I think the reason I saved this calendar was to remind myself that in this time of isolation, fear and illness, others are depending on my prayer and encouragement more than ever.

During this period of isolation, you might consider marking up your own calendars; a hash mark each day for a phone call to a friend in need; a hash mark for a rosary for healing of the sick; a hash mark for attending a livestreamed Mass for the intention of the end of the pandemic. Church is not a place we go but a reality we become, especially as we experience ourselves as community in times of trial. In my own home, I have set a candle (electronic) in the window as an expression of hope, since we are all called to be light in darkness.

May the healing hand of our Lord who made the deaf hear, the blind see, who cleansed the leper and raised the dead touch each of us and arouse in us the hope that overpowers all fear and despair and may we become beacons of hope and healing for all.

Bishop Marc V. Trudeau is an auxiliary bishop for the Archdiocese of Los Angeles. He serves as Episcopal Vicar for the San Pedro Pastoral Region​.