For some, it’s the saint tapestries that hang on either side of the nave. For others, it’s the mausoleum or the Guadalupe tilma relic. Some say the Blessed Sacrament chapel, or the crypt of St. Vibiana.

Ask the Los Angeles-area Catholics you know about that favorite spot, that go-to place they return to every time they visit the Cathedral of Our Lady of the Angels, and you can get a wide range of answers. But 20 years after it opened in 2002, parishioners and regular visitors will agree on one thing about the cathedral.

“It’s home,” said Father Guillermo “Memo” Alonso, who found his vocation attending the cathedral as a teenager. “Not only to me, but I think anyone who comes here, regardless of where they come from or who they are, can get that sense, that feeling that this is their home as well.”

On Friday, Sept. 2, the 27-year-old priest was among the several hundred people celebrating the milestone anniversary of the cathedral’s dedication at a noon Mass with Archbishop José H. Gomez. In the crowd were parishioners, benefactors, and clergy who have served at the cathedral, and even a couple of first-time visitors to what is now considered a downtown LA landmark.

Although Archbishop Gomez was a young auxiliary bishop in Denver when the cathedral first opened its doors, he’d heard stories about the afternoon of Sept. 2, 2002: How thousands of people with tickets endured scorching heat outside, waiting for the cathedral’s doors to be officially blessed before they could enter for the dedication Mass.

As fate would have it, this year’s anniversary Mass coincided with another historically hot day, marking the start of a brutal weeklong heat wave.

“Today is the same weather, but we are inside!” Archbishop Gomez said to laughs at the start of his homily.

But as Archbishop Gomez went on to note, the anniversary was an occasion to give thanks to those “who worked hard and sacrificed to help build this beautiful temple to the living God in the heart of this great city.” 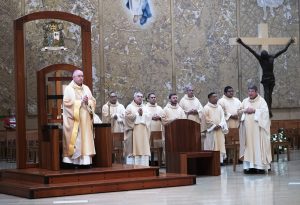 One of those “builders” was Msgr. Terrance Fleming, rector of St. Vibiana’s Cathedral when the Northridge Earthquake heavily damaged it in 1994. When then-Archbishop Cardinal Roger Mahony began to explore options for a replacement, he tasked Msgr. Fleming with helping find a location for a new cathedral — and an architect to build it.

Msgr. Fleming likes to describe the “miracles” that followed: how a surplus lot owned by the county across the 101 Freeway from LA’s historic center became available, and how just 90 days later, the archdiocese owned it.

“There was some kind of impulse to just snap it up,” recalled Msgr. Fleming, currently the episcopal vicar for the Our Lady of the Angels Pastoral Region, where the cathedral is located.

Then there was the “fascinating” process that led to the selection of Spanish architect Rafael Moneo to build the cathedral. Naturally, none of the candidates considered had built a cathedral before. But Msgr. Fleming believes Moneo “got the feel of Los Angeles,” drawing on history to build “the first mission of the 21st century” in California, using adobe for the concrete and including a cemetery (the mausoleum), a garden, and even a stable (“we call it a garage,” quipped Msgr. Fleming).

The dedication Mass was, in Msgr. Fleming’s memory, not just on the hottest day of the summer, but also “the hottest ticket in town”: Benefactors, clergy, religious, and only a couple representatives from each parish in the archdiocese were among those who made the list. Msgr. Fleming remembered the requests from friends and even brother priests “who wanted to bring their mothers.”

“If I had sold tickets, I’d be a millionaire today,” joked Msgr. Fleming, who was vicar general of the archdiocese at the time.

At the time of its dedication, Cardinal Mahony famously envisioned the cathedral as an ongoing project, one that would grow under the leadership of his successors. In the 20 years since, additions have included a Marian tapestry behind the altar; chapels to Our Lady of Guadalupe, St. Pope John Paul II, and Mother Teresa; and a popular bronze statue of St. Joseph and the Christ Child. 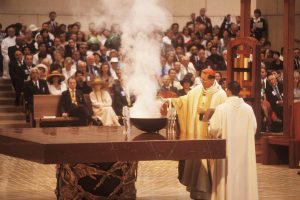 Cardinal Roger Mahony incenses the altar during the dedication Mass of the Cathedral of Our Lady of the Angels Sept. 2, 2002. (Victor Alemán)

Cathedral parishioner Maria Elena Catalan remembered being impressed by the cathedral for the first time during a trip from her native Philippines nearly 20 years ago. She later emigrated to Vancouver, Canada, and eventually ended up in Los Angeles three years ago. Since then, she has made a point of choosing to live close to the cathedral, even when her job has taken her as far as Glendale and Gardena.

“I’ve always preferred to come here,” said Catalan after the anniversary Mass. “There’s so much to see, so many places to pray or visit.”

After 10 a.m. Sunday Mass (her favorite, because of the choir), Catalan said she’s made a habit of praying in the Blessed Sacrament chapel and lighting a candle.

And beyond the dozens of major events it hosts and the thousands of visitors it draws every year, perhaps it is the experiences of people like Father Alonso’s that speak the most. The recently ordained priest and alumnus of nearby Cathedral High School remembered attending the first Chrism Mass at the new cathedral as a 7-year-old with his parish priest at the time. They both arrived late and sat in the back during the Mass.

“Memo: One day you’re going to be altar-serving there,” he remembered the priest telling him.

The prophecy was accurate, but perhaps fell a little short. Years later, it was priests serving at the cathedral who mentored Alonso and helped him discern the priesthood. This past June, he was ordained a priest there. And through his years at St. John’s Seminary, he was the “cathedral seminarian.” That meant frequently assisting at special Masses on Sunday afternoons once or twice a month that brought faithful together from different parts of the archdiocese.

“It’s always gonna be home,” said Father Alonso. “I mean, it’s my love. I’m truly grateful for being able to fall in love more with the archdiocese, seeing how the cathedral is a magnet that brings all of us together to love Christ.”

Archbishop Gomez, Cardinal Mahony, Cathedral of Our Lady of the Angels