Luke Figueroa looked into a planter being filled with dirt outside St. Frances Xavier Cabrini School and imagined a cornucopia of garden vegetables.

And a fresh accompaniment for his dinner.

“I have a plant ready; it’s a green bean,” said Figueroa, 10, who lives not far from the parish school in South Los Angeles. “We’ve been watching it germinate. When it’s ready, we’re going to eat it. With butter and salt.”

He was among a beehive of Cabrini kids who on a recent day banged out eight planter boxes, nearly doubling the size of the parish school garden in a region largely devoid of supermarkets and fresh produce. 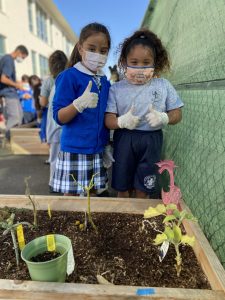 A pair of St. Frances Cabrini third-graders at work on their garden. (Adrian Flores)

The Cabrini Garden is among a growing number of little Edens sprouting from parish schools accompanied with a curriculum designed to foster health, nutrition, and a love of nature as well as garden vegetables.

Eight gardens, funded by the Archdiocese of Los Angeles and managed by Catholic Charities of Los Angeles, rise in wooden box planters overflowing with tomatoes, other veggies, herbs, and spices.

Each above-ground oasis — which cost $5,000 at Cabrini School plus $1,000 for its recent expansion — was supported by the Catholic Relief Services’ Rice Bowl program.

“This is something easy that kids can bring home to their families.”

A food desert brought to life

St. Frances Xavier Cabrini Church, which once operated out of a neighborhood barbecue joint, was founded 75 years ago and named after the first American citizen to be canonized — and a patron saint for all immigrants. Its parish school was opened five years later.

The West Athens parish and school lie at the bottom end of a 51-square-mile region now known as South Los Angeles, where 95% of its residents are Latino or Black, and 1 in 5 of its 750,000 residents live below the poverty line, and where 1 in 3 residents live more than a mile away from only seven supermarkets in South LA, according to a recent Geodesign study.

It’s also a federally designated “food desert,” where a lack of access to fresh fruit, vegetables, and other healthful whole foods pose a significant risk to people’s health.

That’s where Catholic Charities of Los Angeles and its Calfresh Healthy Living program at parish schools come in. It has added health and nutrition into the curriculum of each garden school, including such topics as where food comes from, how plants grow, and how to create a healthy, well-balanced diet.

She was referring to the 2015 encyclical of Pope Francis, “On Care for our Common Home,” which calls on humanity to protect the planet and its poor.

A Cabrini Garden transformed by kids

On a cool morning in late October, Cabrini School’s nearly 230 K-eighth-grade students filed in, the boys in white shirts and black ties, the girls in black-and-white plaid tunics, all dressed in Cabrini French-blue sweaters.

“Dear heavenly Father, we come to you with thanksgiving in our hearts,” said Carmen Orinoco-Hart over the P.A. system, the school’s principal of 11 years. “We come to you to thank you for our blessings.”

Their blessings include two fall harvests of precious plants since their garden was installed in early 2019.

“Oh my gosh. They’re co-parents. They’re so proud of their growing babies,” Janet Mackey, Cabrini vice principal and an eighth-grade teacher, said. “In this community, all they have is processed food.”

“The garden means a lot,” said Sophia Tellez, 11, of Inglewood, an officer of the student body. “I learned how to plant and germinate seeds. I’m caring for a pea seed. I love peas, ever since I was a little kid. My grandmother taught me how to love them, especially in soup.”

After a half-hour lecture by Lewis on germination, around 75 Cabrini kids filed out to the school garden, where Lewis oversaw the expansion. 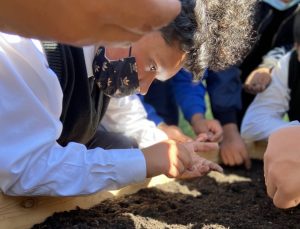 Teams of students gathered in front of 10 planter boxes filled with tomatoes, eggplants, zucchinis and many varieties of herbs and peppers, on the east side of the school.

Last summer, it gave them the first taste of salad. This fall, a new crop is in time for Thanksgiving.

In 20 minutes, they’d assembled four 3-foot wooden boxes, screwed in the wheels, filled them with soil, and sown them with lettuce seed.

At the end of two box-building sessions, students blessed each box with the waters of life, which slowly spread across the darkening soil to the seeds below.