Theresa Fragoso had only three months of prep time to run the 2019 Los Angeles Marathon, and her longest run prior to that was 14 miles.

Instead of panicking, she prayed.

“On the morning of the race, I set 26.2 miles into my mind,” Fragoso said, recalling the day she sandwiched herself between some 23,000 others at the starting line at Dodger Stadium.

Buoyed by the crowds cheering on the runners, she remembers making “be still and know that I am God” her mantra as she began to set her pace.

“That is what ultimately carried me across the finish line that day. It truly was a spiritual experience rather than a race.”

When she isn’t running, Fragoso works for the Catholic Education Foundation of Los Angeles (CEF) as director of operations. And so when it came to asking others in CEF to be part of a team to raise money toward tuition assistance for local Catholic school students, she couldn’t just talk the talk, or even walk the walk.

Fragoso has run the run, and then some.

In early March 2020, when the LA Marathon was held just days before the initial COVID-19 shutdown, she returned to do the half-marathon. This year, she’s dialing down the distance for the sake of her 5-year-old granddaughter, who will be accompanying her for the 5K the day before this year’s marathon taking place on Sunday, March 20.

“I want to introduce her to the idea of giving back to the community,” said Fragoso, who has been with CEF for 24 years and is a parishioner at St. Philomena Church in Carson.

To celebrate CEF’s 35th anniversary, the 60-member-strong racing team is aiming to set a different kind of record for the 2022 event: raising $100,000 in pledges.

They know it won’t be easy, since both they and their benefactors are on shorter rest: Because of the pandemic, the 2021 LA Marathon was delayed from its usual March spot until November. That event attracted just 13,000 total runners, and less than a dozen CEF participants. 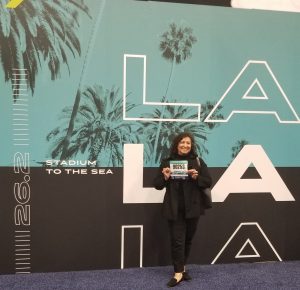 Back in 2019, the team’s inaugural year, Fragoso joined Juan Munoz, the CEF’s engagement and stewardship manager, and Andrew Garcia, a senior program officer, in leading the charge. They found 17 Catholic teachers, administrators, parents, and staff, and raised more than $65,000 for tuition. They matched that amount a year later.

The team runs with an explicit mission statement: to empower and drive ambassadors to educate, fundraise and spread awareness about the importance of Catholic education.

“It was difficult to ask others to participate without making a commitment ourselves, but I know my team, and our inspiration to run was CEF’s mission and the children, schools, and communities that we serve,” said Fragoso.

“We understand and know firsthand the sacrifices many of the families make to send their children to a Catholic school and why a Catholic school education is so important to them. It’s inspiring and we run for them and for their future.”

Each participant on the CEF Racing Team sets up a profile on the organization’s website and puts up their own pledge in hopes of inspiring family and friends to give generously.

Munoz ran the 2019 LA Marathon in just more than five hours. He plans to participate this year focused more as a coach to train the group’s new participants. He will also man the Health and Fitness booth for CEF to raise more awareness and support for the team.

His hope is that more than a dozen of the team’s runners are able to participate in one of the three events. The 2022 LA Marathon will use the course from last year that still begins at Dodger Stadium but now ends at the Avenue of the Stars in Century City, instead of the Santa Monica Pier.

“It’s a little tough to ask loyal donors again who’ve just helped us out four months ago,” Munoz admitted. “But we will make it happen.”