Unlike the nearly dead airport a couple of miles away, St. Margaret’s Center in Lennox is alive with activity on Wednesdays in the time of the coronavirus.

Inside, teenage volunteers and staff are busy filling cardboard Chiquita banana boxes to the top with donated Wonder Bread, fresh fruit, and frozen vegetables. Outside, workers are loading those boxes into family cars, while other volunteers are unloading new donations that will help fill more boxes.

All the while, homeless visitors are stopping by to consult with Catholic Charities caseworkers under a white pop-up tent.

At the center of all the bustle is Mary Agnes Erlandson, the center’s director for the last 30-plus years. Donning a facemask and a cowboy hat to protect from the early afternoon sun, she takes down information from drive-in visitors while giving directions to what’s left of the center’s decimated staff and a team of volunteers.

“I haven’t done direct service for years,” admitted Erlandson, 62, whose administrative duties normally keep her busy with office work. “I’m down here because most of my staff has either health issues or age issues that don’t let them do this.”

“So it takes a physical toll on me,” but, she added with a grin, “it’s also really exciting.”

Some of the people she sees now are regulars who’ve been coming to this refuge under Los Angeles International Airport’s noisy southern flight path for decades, whether to help or be helped.

But since the coronavirus (COVID-19) pandemic began to make its presence felt in Los Angeles County in mid-March, she said roughly half of the center’s visitors are new faces — many have been severely hurt by economic consequences of the near halting of domestic and international air travel.

“Almost everyone I talk to has lost their job or someone in their household has, so they just have a drastic reduction of income,” said Erlandson, a longtime parishioner of Visitation Church in neighboring Westchester. 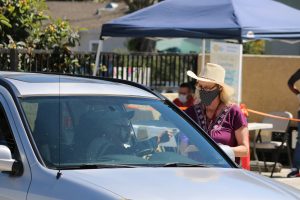 To qualify for help from St. Margaret’s, applicants must live in the greater LAX area. A large percentage of its visitors are Latinos who won’t be benefiting directly from relief measures enacted by the federal government.

“We don’t ask people their immigration status, but we know there’s some undocumented who may not qualify for some benefits like the stimulus check,” said Erlandson.

Among those feeling the pinch are Miguel and Magdalena Vera, recent immigrants from Jalisco, Mexico, now living in Inglewood. Until a few weeks ago, the couple and their daughter worked in the same LAX-area hotel. As soon as air travel slowed amid the pandemic shutdown, they found themselves furloughed.

“With what we made before, we had enough to pay our rent, and we lived well,” said Miguel.

After a month without work, the family’s savings dried up and with practically no money left to buy groceries, the Veras made a Wednesday appointment to pick up one of the 40-pound boxes of food being packed at St. Margaret’s, which contain a mix of perishable and nonperishable items.

“This is awesome,” said Miguel, motioning from the driver’s seat of his Chevy Suburban to the hive of activity in St. Margaret’s parking lot. “Everything they give us is excellent, and we make good use of it. We’ll take any help we can get right now.”

Erlandson said that about 9 out of 10 families who pick up food boxes (by appointment only, to avoid crowding) come in their cars, the others wait patiently in line (at a social distance) on the sidewalk along the narrow stretch of Inglewood Boulevard to be helped. In total, at least 200 families are served in one Wednesday. 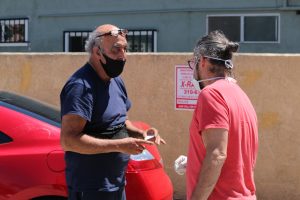 Furloughed LAX worker "Gee," who has been living out of his car since November, exchanges information with a St. Margaret's Center case worker. Days after speaking to Angelus, the 62-year-old was placed in a hotel room through "Project Roomkey." (Pablo Kay)

Although homeless, until the shutdown in air travel he was still working a $21-an-hour job handling baggage at the Tom Bradley International Terminal.

“Things were already tough between November and now, but at least I had a job,” Gee said.  “Now I got no house, no job.”

Gee has been spending nights in his car at a LAX parking lot, hoping that the days of airport traffic — and steady employment— come back soon.

Asked how he felt about coming to St. Margaret’s, the native of Guatemala couldn’t hold back his emotion.

“That I’m at home,” he replied between sobs.

Although he’s not Catholic, Frank Rogers Jr. is convinced that divine providence brought him to St. Margaret’s.

After being homeless in San Francisco for 10 years, a government assistance program placed him in a home in South Central LA, then in a government-subsidized apartment building in Inglewood.

His upstairs neighbor told him about St. Margaret’s. The neighbor has moved away, but the friendly help he’s received is enough for him to “stay with the program.”

“I’m very grateful; you know God has a way of connecting you with the right people if you’re into him,” remarked Rogers.

Over the years, regulars like Rogers have benefited from about 25 different programs at St. Margaret’s, ranging from health insurance enrollment, emergency rent and utility help, English-language courses, and help with immigration and U.S. citizenship applications. 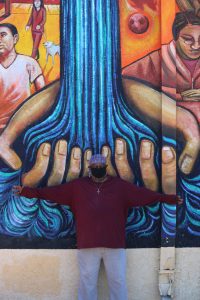 Frank Rogers Jr. in front of one of the murals at St. Margaret's Center. (Pablo Kay)

However, in the wake of the pandemic, the programs St. Margaret’s is able to offer have been reduced to just a dozen, and food pickups have been cut from three days a week to just one. The center continues to offer showers for the homeless on Mondays, hygiene kits on Fridays, and has three caseworkers available to help homeless persons find temporary shelters.

Even in a time of widespread suffering, Rogers said he’s moved that there are people and programs like Catholic Charities dedicated to helping those who can’t always help themselves.

“It means that the world is still alive, that people still care,” the 72-year-old New York native said. “It isn’t over till it’s over. You can’t never give up, you know, you have to realize that we aren’t here by ourselves. Everybody’s connected.”

To donate to Catholic Charities in this time of need, visit CatholicCharitiesLA.org/donate, where you can select the location you would like to help. For more information about St. Margaret’s Center, call 310-672-2208 or send an email to [email protected].