Bishop Conaty-Our Lady of Loretto High School sounds like a big name for a fairly small school. Tucked into the Harvard Heights neighborhood west of downtown LA, its graduating senior class of just over 80 young women gathered on an athletic field bordered by single-family houses.

Among them was Jeaneth Marroquin, winner of the school’s Kathleen Kinney “Conaty Girl” Award, given every year to a graduate found to embody faith, a love of learning, and vision. Jeaneth is an honor student headed to UC Davis to study law, with hopes of setting up her own law firm one day to “help others that don’t have the resources that they need.”

Poised and serious, she is one of those young people who seem to not just have everything figured out, but scheduled weeks in advance. And yet, just a few months ago Jeaneth found herself at a point where she “didn’t want to go on.”

For all students, the pandemic posed varying degrees of challenges ranging from inconvenience to hardship to tragedy.

Like most students, Jeaneth struggled with the vagaries of remote learning brought on by the COVID-19 pandemic. She missed being away from school, that “place of fun and joy,” and from her friends and teachers.

One of the things Jeaneth had been looking forward to most last year was Bishop Conaty’s junior ring ceremony, scheduled for March 2020. But after that was canceled amid the initial coronavirus lockdown, as was the return flight of her maternal grandmother, Maria Fulgencia Estrada viuda de Vásquez, who had flown in from El Salvador to attend.

Maria ended up spending months with the family, who were careful to do everything they could to protect their grandmother. But the virus still found its way inside the Marroquin home, infecting the whole family, including Jeaneth’s grandmother, whose symptoms landed her in the hospital. Not long after, Jeaneth herself was rushed to the hospital in an ambulance with trouble breathing.

Though Jeaneth would eventually improve, her grandmother would not. She passed away in October.

For Jeaneth, the grief seemed insurmountable.

“My grandma was my whole world, and when she passed, my world collapsed,” Jeaneth said.

She became depressed, suffering from severe anxiety attacks. Her mental health took the place of her schoolwork. Missing assignments from the days of school missed while in the hospital piled up.

“I slacked off on a lot of work that I couldn't bring myself to complete,” she recalled. “My grades started to fall off, which had never happened in my high school life.” 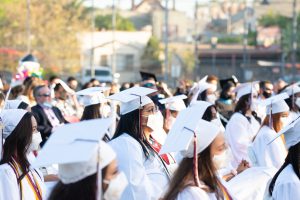 When Jeaneth first came to Bishop Conaty, she struggled academically, especially with math. But she learned to work her way through difficulties, becoming an honor student and even garnering a B-plus in her senior honors pre-calculus class.

But the blow of losing her grandmother was not something she could grind her way through. Instead, it ground her down to the point that her father, Juan, recalled being shaken to hear his daughter say “life wasn’t worth it anymore.”

“She wanted to hang up the gloves. Her grades started coming down,” Juan said. “I told her, ‘No, you’re not going to do this.’ She loved her grandmother a lot, so I told her, ‘You promised her you were going to be someone, you need to show her. You can’t give up. There are always going to be obstacles but you can’t get stuck on them. You have to put effort into these things, so that later you can laugh in life!” he told his daughter.

For Juan, the toughest part was watching his daughter suffer severe anxiety attacks. “I took her to psychologists and everything, and they couldn’t help,” he said. Eventually, what did was family — both at home and at school.

Jeaneth said she assumed the pandemic would mean the end of the close, nurturing relationships she enjoyed with some of her teachers. “When the pandemic hit I thought all that would change.”

It didn’t. She found that her teachers were just as concerned, and just as helpful on a computer screen as they had been in a classroom.

“The pandemic school ran the same way even though it was virtual,” she said. “Teachers were always there for us when we needed extra help, tutoring was still taking place after classes, and school overall ran the same way it did when we were in person.

“When I needed comfort during the pandemic, I can truly say that staff and faculty were there for me through it all. I could never repay the faculty at my school for all that they have done for me.”

Though exceptional, her experience is by no means unique for local Catholic high school students who faced similar challenges down the homestretch.

Miguel Geronimo of Verbum Dei High School acted as an interpreter between his family and health care workers when his grandmother, Elia Valdez, contracted COVID-19. When she died, Miguel said he couldn’t believe that “someone I saw as a second mother was gone in a few days.” 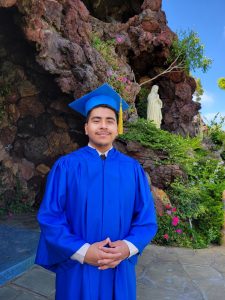 Verbum Dei graduate Miguel Geronimo had to act as interpreter for his family and health care workers when his grandmother fell ill with COVID-19.

He said he leaned on his brothers for support. “It was hard to find the heart to keep going,” said Miguel, who will attend Cal Poly Pomona to study computer science. “The support from family allowed that to happen and they are the main reason I strive to be successful in and after college. I would not be the man I am today if it wasn’t for them.”

That sentiment was the theme of Bishop Conaty’s graduation ceremony. Family was on everyone’s minds, and hearts. Valedictorian Katherine De Jesus and Salutatorian Katherine Urbina got choked up talking about their families during their speeches, as did the day’s two guest speakers, Nancy Portillo, assistant superintendent, and the Catholic Education Foundation’s Theresa Fragoso.

“Your success is their success,” Theresa told the students.

Jeaneth credits the values passed on by her parents for seeing her through the most extraordinary of times: humility, helping others, and faith in God.

“I know that God does everything for a reason, and that the outcome is always better than the setback,” said Jeaneth. “l am truly blessed to have made it this far; I wouldn’t have been able to do it without God, family, and friends.”