It had been years since she sat in any pews, despite growing up Catholic. Yet unexpectedly, Saucedo had a good reason to return and picked a good day to do it.

“I recently found out I was pregnant,” said Saucedo. “I’m not in the position I’m supposed to be in. … I have to do better and come here and ask God for help.”

“I feel the need to be closer to him again,” she added.

Saucedo was able to reconnect with her faith during the Nov. 30 “Choose Your Moment with Jesus: A Day of Reflection” event at St. Andrew. The parish, in partnership with the archdiocese-wide “Back To Mass LA” campaign, invited Catholics to participate in the form of worship of their choice — and invite others to join them. The daylong schedule included Mass, adoration, and a eucharistic procession. Several priests were available for spiritual direction and confession. Saucedo took advantage of both.

“I prayed and confessed myself too, asked for forgiveness for anything I’ve done,” said a tearful Saucedo. “He [priest] gave me good advice.” 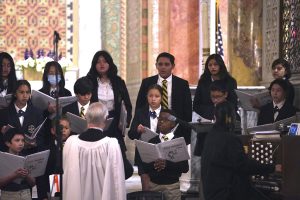 “I’m a big believer that the church must be unlocked, must be open all day because you never know when someone is going to be touched by God,” said Father Marcos Gonzalez. “I’m hoping that once people are here, they’ll be inspired.”

The event was timed to coincide with the feast day of the parish’s patron. It was, after all, St. Andrew who first invited his brother Peter to meet Jesus. For Father Gonzalez, who as a child attended Mass because of his neighbor, evangelization is all about doing the same.

“Wouldn’t that be a wonderful epitaph on all our tombstones, that we brought someone to Jesus?” asked Father Gonzalez during his homily at Mass that day. “Andrew should be everyone’s middle name.”

It’s no secret that Catholic Mass attendance has been in steady decline in recent decades, a trend that has now accelerated thanks to the COVID-19 pandemic. The archdiocesan LA Catholics Digital team, under the leadership of Archbishop José H. Gomez, came up with a plan in response.

The “Back To Mass LA” campaign hopes to get people back in the pews through the power of invitation, complete with a free kit that ordinary Catholics can use to re-engage their loved ones. The kit includes a reflection from the archbishop, an invitation to Mass, and a pair of cross bracelets embedded with QR codes, that when scanned, lead the wearer to a local church. More than 3,000 of the kits, which are available for free on LACatholics.com, have been distributed since the campaign’s launch in September. 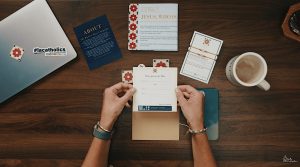 A promotional image of one of the free "Back to Mass LA" kits. More than 3,000 have been distributed so far. (LA Catholics digital team)

St. Andrew parishioner Carmen Cortez opened hers with a neighbor who hasn’t been to church since the pandemic started.

“I gave one bracelet to her and one to me, and said we’re going to pray for each other. She was in tears. She said, ‘God sent you to me,’ ” recalled Cortez as she showed off her bracelet. “My mission right now is to invite people back to the Church.”

Cortez asked the children in her catechism class to invite their families. Ten-year-old Saul Nicolas says he shared the kit with his mom because he likes going to Mass.

“I think it’s important to learn about God,” said Nicolas. “It makes me happy to learn about the things that happened before I was born, before any of us were born.”

His mother said she’s slowly returning to Mass after the pandemic and credits her son for encouraging the family.

“Of course I’m proud of my son,” said Tereza Arellane through a translator. “He’s a very good child of God.”

Children bringing parents into the fold is not unusual, says Erick Rubalcava, chief of Mission and Catholic Identity for LA’s Catholic schools.

“My experience is that parents will come to Mass because their kids want to come to Mass,” said Rubalcava. “It gets the parents curious about the transformation their children are having … we all long for that deeper connection with our Creator.” 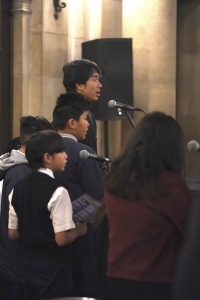 Isaiah Grey of St. Pius X-St. Matthias Academy in Downey sings with the student choir at the "Choose Your Moment" event. (Isabel Cacho)

The day started with a well-attended Mass with children from the parish school. Later, Rubalcava led students from other Catholic schools in a musical performance during a “Praise and Worship” adoration session. While the music was chosen to uplift those in attendance, the performers found themselves moved as well.

“It’s an amazing feeling to be in this beautiful church and to perform for all these wonderful kids here,” said 17-year old Isaiah Grey, St. Pius X-St. Matthias Academy in Downey. “I really love being a part of this choir.”

Thirteen-year-old Therese Dyogi was smiling from ear to ear.

“This was the first time we were performing at a different parish. … It was amazing,” said Dyogi, who attends St. Anthony of Padua Catholic School in Gardena. “I could feel the presence of the Lord covering us.”

You can’t get that kind of experience online, pointed out Father Gonzalez. He compared watching livestreaming Mass to watching a cooking show.

“You can learn something, but you cannot smell it, cannot taste it, and you certainly can’t eat it,” said Father Gonzalez. “We are an incarnational church. It’s impossible to receive the Eucharist on television.”

Terri Chamberlain couldn’t agree more and said pandemic isolation was hard. She’s “elated” about the “Back to Mass LA” movement and wanted to participate.

“I decided to come during the rosary because the Blessed Mother leads us to Christ,” said Chamberlain, a parishioner of St. Andrew. “I pray the rosary daily but I want to pray with others.” 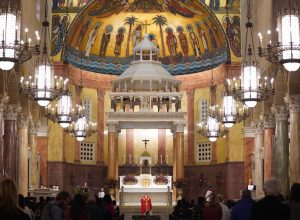 LA Catholics spent time with the Blessed Sacrament during one of the adoration sessions at the "Choose Your Moment with Jesus: A Day of Reflection” event Nov. 30, feast day of St. Andrew the Apostle. (Isabel Cacho)

At nighttime, Father Gonzalez led parishioners out of the church and onto the streets for a candlelight eucharistic procession. He was joined by other clergy and the Carmelite Sisters of the Most Sacred Heart of Los Angeles. Mary Whittle and her adult daughter Stephanie chose the procession as their “moment.”

“I promoted it with my circle of friends and they came this morning,” said Mary Whittle. “But I wanted to come this evening. I love the eucharistic processions. They take me back to when I was a little girl.”

At the end of the day, there was a closing Benediction and reception. The LA Catholics Digital Team believes the power of invitation made the event a success, and plans to organize others in more parishes soon.

“The vision of the campaign was lived out and when that’s lived out, we bring people closer to the Lord. That’s the best thing one could dream of,” said Sarah Yaklic, chief digital officer. “If we keep extending that invitation, having our church doors open, allowing moments for the faithful to enter, then Los Angeles will be set on fire.”

Saucedo said she walked out those doors with more hope than when she walked in. She even found a little peace.

“I feel happy that I came. I will come back.”

Back to Mass, Eucharist, LA Catholics