Holy Family Church in Artesia bought an adjacent building just before the COVID-19 lockdown. Despite worries that it would be a financial drain as donations plummeted in the pandemic, the building’s Blessed Carlo Acutis Broadcast Center has driven growth in the parish and outreach to the Filipino community nationwide.

“We have had incredible growth in the last few years,” said Father John Cordero, the pastor.

“There is a need to engage more young adults. We want to use this as a platform to increase vocations. Those are just a few of the [livestream] conversations that we want to have.” 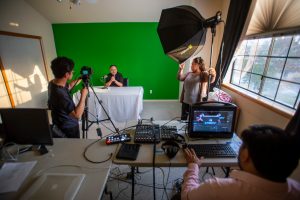 Holy Family — which had 3,000 registered members before the pandemic — now has 10,000 Facebook followers and 2,000 YouTube subscribers. Regular Mass attendance is nearing pre-pandemic levels.

The parish tech team was a key to that growth.

“They include hobbyists, people who just learned on the fly, who came together to make something great,” Father Cordero said.

Though Holy Family is at least 80% Filipino, Mass is celebrated in English, Spanish, Mandarin and Portuguese. Portuguese parishioners were instrumental in launching the multimedia outreach, drawing on their experience running Radio Lusalandia, a Portuguese internet radio station.

“The first persons who helped to run our system are volunteers from the Portuguese radio station,” Father Cordero said.

The studio was part of the newly purchased building’s mission as a center for youth and young adult ministry. Each room was named for a relevant saint. For digital production, “Who better to name it for than Blessed Carlo Acutis, right?” Father Cordero asked.

Blessed Carlo, who was 15 when he died in 2006, was known for his devotion to the Eucharist, his kindness to others, and his skill with computers. He created a website to document eucharistic miracles.

So it was fitting that the Blessed Carlo Acutis Broadcast Center launched by streaming the Blessed Sacrament when the church shut its doors. 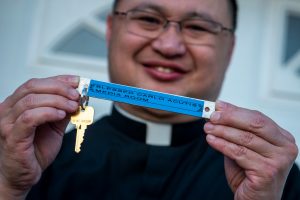 “People just stared at the tabernacle in the first few days of the lockdown,” Father Cordero said.

New technology facilitated renewed ministry. The parish installed a low-watt radio transmitter for people to listen to Mass on car radios in the parking lot – while watching on a Jumbotron through a church window. Parking for hundreds of cars was managed by the Knights of Columbus, a notoriously elderly group that began asking young adults to assist with parking. When the Holy Family Knights recently inducted 18 new members, many were young adults from the parking ministry.

The video ministry expanded so rapidly that the equipment broke down from round-the-clock use. After replacement gear was purchased, someone repaired the first system, enabling a second production team to create programming beyond parish events.

Thus, through the Filipino Ministry of the Archdiocese of Los Angeles, the Blessed Carlo Acutis Broadcast Center received a grant from the U.S. Conference of Catholic Bishops’ Subcommittee on Asian and Pacific Island Affairs to host an interactive, nationwide livestream synodal session on the future of Filipino ministry in the diaspora. Titled “Hapag Kwentuhan” (“Stories at the Dinner Table”), it was linked to the 500th anniversary of Christianity in the Philippines.

Bishop Pablo Virgilio David, president of the Philippine bishops’ conference, addressed topics such as a need for pastoral formation for the millions of Filipino overseas workers who have become “accidental evangelists” in the homes of non-Christian families. He also spoke of how the vibrant faith of Filipino Catholics is renewing European and American parishes.

That love for the Church was on display as participants in “Hapag Kwentuhan” texted a “word cloud” in response to the question, “How do you feel in church?” The leading answers were “inspired,” “blessed,” and “nurtured.” Participants then divided into small chat groups to discuss mission.

Father Cordero wants to continue those livestream discussions on a regular basis through the Blessed Carlo Acutis Broadcast Center. 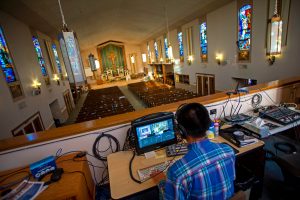 “We have a lot of dynamic speakers among the priests here in the United States — young Filipino priests that can be tapped to be part of that wider conversation,” Father Cordero said.

He can also draw on strong lay leadership — starting at his own parish.

Cecile Motus, the retired assistant director of the Secretariat for Cultural Diversity at the U.S. Conference of Catholic Bishops, belongs to Holy Family, where her sister, Lucille Motus Parisho, is president of the Filipino American Catholic Community. Together they help to mobilize local, regional, and even national celebrations of Filipino Catholicism.

For the first time since 2019, Holy Family hosted Salubong, an Easter morning liturgy that begins outdoors at 5 a.m. Men carry an image of the risen Christ in procession, while women carry an image of the Sorrowful Mother — until they meet in joyous celebration. Such drama is woven into Filipino spirituality, but Catholics must go beyond preserving beautiful traditions, Cecile said. 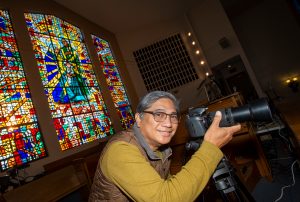 Though it is still in the dreaming stage, the Blessed Carlo Acutis Broadcast Center is positioned to provide pastoral and spiritual formation for such leaders, said Father Rodel Balagtas, priest liaison for the Filipino Ministry of the Archdiocese of Los Angeles and pastor of Incarnation Church in Glendale.

“The question is, ‘Where is the Holy Spirit leading us at this moment as Filipinos in the diaspora’?” he said. “We are called to be missionary disciples. We are called to share our gifts. ... There is definitely a need to use the media to reach out to Filipino Americans across the United States. We are just at the beginning of that.”