An LA family’s coronavirus ordeal: ‘No choice but to hold on to God’

Rosa Sepulveda took a deep breath before trying to describe how she has been processing life since early March of this year.

“Disorienting, depressing … overwhelmingly heartbreaking,” said the catechist and parishioner at Christ the King Church in the Hancock Park/Hollywood-area of Los Angeles for the last 25 years.

As a result, there was only one thing Sepulveda could do.

The coronavirus (COVID-19) pandemic hit her family deeply. Sepulveda, 60, contracted the virus in early March. So did her 64-year-old cousin, Rebeca Arciba, and their 79-year-old aunt, Estela Serrano. The three of them worked together in close quarters at Rosa’s Drapery manufacturing workroom in the Lafayette Square-area of LA.

By late April, the disease took the life of Serrano, whom Sepulveda described as the family matriarch, after a 40-day battle with the virus at Good Samaritan Hospital. 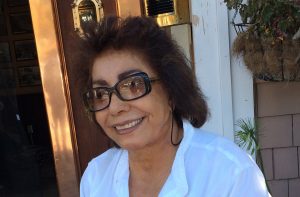 Then came the stay-at-home orders that led to their store having to close. They also kept Sepulveda from being able to seek refuge or peace inside the walls of her home parish.

“This whole time has been incredibly difficult, but what was very traumatizing was not being able to go to Mass, to be in the church, to be with my other church family,” she added.

Still, there were Zoom prayer meetings and rosary gatherings, phone calls, and check-ins from the parish offices. There were food drives to help with, and there was an invitation to participate in person in a private weekday Mass — quite the privilege in recent months. And now, the reopening of parishes for public worship.

Those things have all made sure the healing process has continued for Sepulveda.

“It has been natural for me to rely on my faith and the support groups in church,” Sepulveda said. “All those prayer groups were an important part of dealing with this. As a family, our faith, hope, and love of God has made this grieving process much easier to endure.”

The details of what the Sepulveda, Arciba, and Serrano families endured for those traumatic months may seem like a blur now to them.

In early March, the three women at their business on Washington Boulevard simply thought the flu was going around — body aches, headaches, coughing — so they took over-the-counter medications.

Serrano eventually visited her personal doctor, who prescribed antibiotics to treat what she was told was a urinary tract infection and possibly pneumonia.

By mid-March, Sepulveda and Arciba improved, but Serrano needed to be taken to the emergency room by her son Juan, who would also test positive for the coronavirus. Serrano was immediately intubated and sedated. Two weeks after she was admitted to the hospital, her coronavirus diagnosis was confirmed.

For weeks, family members could only visit Serrano by checking in on her through a window of her hospital room door. Her relatives in Mexico were not as fortunate.

As Serrano fell into a coma, developed encephalitis and multiple organ failure, the family was denied their wish to have a priest give her the anointing of the sick — only the hospital chaplain was allowed to enter rooms.

The last time Sepulveda saw her aunt was on April 24. Four days later, Serrano passed away.

“We couldn’t be in the room, or hold her hand, or pray with her hoping she could hear us,” said Sepulveda, who lives with and cares for her 92-year-old mother, Carolina, in Fairfax. “We were already in a panic trying to make sure no one else would get this virus. With everyone in quarantine, we couldn’t hug or comfort each other.

“The visits were very limited. We had no choice but to hold on to God.”

At Christ the King, one of the important ministries during the pandemic was a low-tech one: calling parishioners to see if they needed support. When Sepulveda got the call, she certainly had a situation to explain.

“I have always known Rosa as a woman of faith,” said Maria Elena Burgos, who has been involved at Christ the King for decades in many capacities, and whose husband is in the permanent diaconate program. “We had heard she was asking for prayers and we all reached out to her, even if it was only through Zoom prayers.”

At one point during the quarantine, Sepulveda received an invitation to be one of only two parishioners allowed to physically attend the parish’s livestreamed daily Mass. She was able to meet in the sacristy with Father Juan Ochoa, the church administrator. He had been going through the passing of his uncle at the same time.

“One of the most difficult things for us as a clergy has been to be with the people,” said Father Ochoa, who previously served as associate pastor at the Cathedral of Our Lady of the Angels before being assigned to Christ the King last year.

“Through Church history, every time there is a crisis, the Church has been there with the people — the Church is the mother. When your children are sick, a mother doesn’t leave, she finds medicine and is there to take care of the child. But it feels here we are in two extremes.”

One example, Father Ochoa explained, is the life of St. Damien De Veuster of Molokai, who left Belgium as a missionary from the Congregation of the Sacred Hearts of Jesus and Mary and spent the rest of his priesthood in Hawaii tending to those with leprosy.

On the other side, there is the example of Father Gabriel Diaz Azarola, a young priest in Valdemoro, Spain, who had the virus, wasn’t aware of it, celebrated Mass and infected many in his parish. He has since taken to social media to express his apologies.

Christ the King has some 340 registered parishioners, but perhaps just as many who attend but aren’t registered, and 80% of them are over the age of 65. So Father Ochoa activated what he calls the “Ministry of the Ear”: calling parishioners to be with them, listen to their needs, and pray with them. 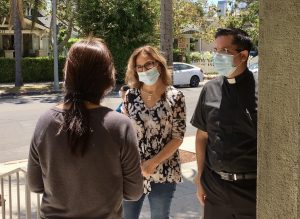 “It’s a sign of hope amidst this chaos,” said Father Ochoa. “Seeing Rosa every Friday at our Zoom prayer service, we could do more than just a Facebook livestream Mass when they only see and hear me, but they can share, ask questions, and make petitions. Rosa stayed close to us.”

On Sunday morning, June 7, Sepulveda admitted she had a reason to smile.

As one of the volunteers helping to disinfect the church between the parish’s 10:30 a.m. and 12:30 p.m. Masses, she was finally among her fellow parishioners (and some former catechism students, too) in the flesh again. Only some 30 parishioners could attend each Mass in the nearly 100-year-old church because of social distancing requirements.

Earlier in the week, Rosa’s Draperies was allowed to reopen. But there was a huge void to acknowledge. This was the business that started in 1977 and became Rosa’s Draperies in 1984, as Serrano had encouraged Arciba and Sepulveda to come together as business partners.

“It was her vision of being self-employed, looking out for each other,” said Sepulveda. “She had the experience and knowledge. We all went in this together. It flourished.”

At the reopened Sunday Mass, Sepulveda wore required masks and gloves, even though she continues to test negative. The rest of her close-knit family has remained safe and is testing negative.

Serrano’s ashes will soon be interred at the plot she purchased years ago at Resurrection Cemetery in Rosemead. A funeral celebration Mass is yet to be planned, but it is now anticipated to happen soon.

“We know that our faith teaches us that dying on this earth is not the end, there is a life beyond besides this earthly one,” said Sepulveda. “That’s where our hope is, she’s in a better place and better life, and that gives us some comfort.”