Four years ago, when Ashley Giron arrived as principal at St. Jane Frances de Chantal Catholic School in North Hollywood, she asked teachers and staff to come up with a list of improvements they would like to see made at the school over the next five years.

Anything was up for discussion, and the list soon grew into a wide-ranging “Dream List” with everything from new roofing, to better pipes, to more dynamic elective classes.

At the time it may have seemed like a nice exercise, but probably a tad optimistic. The San Fernando Valley school had seen its enrollment drop as low as 150 in recent years (it was 180 when Giron arrived). Its finances were less than ideal, and its campus, opened in 1951, was beginning to show its age, to put it kindly.

“Every time I turned around, the plumbing was overflowing somewhere,” Giron recalled of her first year.

But since then, that Dream List has more of the feel of a To-Do List. Many of those items have since been checked off as “done,” and as a result, St. Jane Frances is writing its own comeback story: The turnaround at the school — now in its 70th school year — has seen its finances toned up and much of its campus fixed or improved. But perhaps most impressively, its enrollment has surged to 250 students during the COVID-19 pandemic.

Giving a tour of the school, Giron pointed out shiny new flooring, smart projectors in classrooms, fresh paint and, yes, new plumbing. The physical transformation left such an impact that teachers like Brittnie Nerkins said they were a little nervous when students came back to a relatively new campus last summer.

“It was a little scary,” she said with a broad smile. “We were getting back kids who hadn’t been in a classroom for a year and a half and you felt like, ‘Hey, be careful, don’t scratch the floors! Don’t touch the paint! Hey, don’t you bring that Gatorade into this classroom, you know better!’ ” 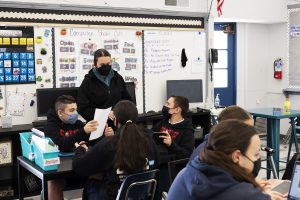 New floors, paint, and educational equipment have been installed at St. Jane Frances classrooms thanks to grants from the Shea and Smet foundations. (Victor Alemán)

Nerkins’ tongue-in-cheek confessional is met with laughter by her colleagues during a teacher meeting. One of them is Kathleen Richardson, who started the school’s preschool program in 1986. Richardson, like other teachers, is proud to show off her classroom, to point out the new floor and closets, the doors that have been replaced. Perhaps even prouder than the rest, given that she actually attended the school in the 1950s.

“When you think about where we were and where we are now, it’s really amazing,” said Richardson.

At a time of unprecedented challenges for Catholic education, St. Jane Frances stands out as a success story. What did it take to make it happen? Here are three components that helped.

Since Giron’s arrival, she and St. Jane Frances de Chantal Church pastor Father Antonio Carlucci said they’ve forged a partnership based on mutual respect and a shared vision for the school.

“I need to work with a pastor who’s willing to work with me. Father [Carlucci] has been great, probably because he’s been an educator for much of his career,” said Giron, referring to the fact that Father Carlucci has worked with seminarians. “He’s not a micromanager. He’s amazing, he trusts me.”

Father Carlucci will be the first to tell you he does. He’ll also say that the school runs on Giron’s energy and talent, and that his part to play is one of active support.

“I recognize I’m a priest and I don’t know as much about the school as she does,” he said. “I trust her, I listen to her.”

Of course, there are times when some people in the school community may not agree. Though a pastor can be valuable in chatting up foundation presidents or negotiating down contractors, the most critical interaction they have is with school parents who, at times, see things differently.

“There are times when parents come to me because they don’t like what she’s doing and I’m very clear with them. I say, ‘Don’t come to me, talk to Mrs. Giron. Because what she tells you, I believe.’ And sometimes they’ll say, ‘But you’re the last word,’ and I’ll say, ‘Yes, and the last word is ‘Talk to her.’ ” 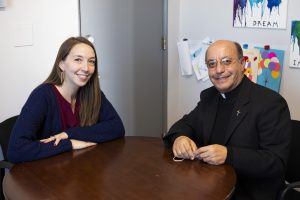 Giron and St. Jane Frances pastor Father Antonio Carlucci credit a close working partnership to the improvements in the school’s finances and infrastructure while growing its enrollment from 180 to 250 students. (Victor Alemán)

Giron credits their partnership with St. Jane Frances’ relatively quick turnaround. “It amounts to a make-or-break kind of thing for the success of a school,” she said. “It’s so liberating to know he has my back and I have the autonomy to get what needs to be done, accomplished.”

Teachers with a mission

It’s no secret that teachers at Catholic schools often must perform above and beyond those at public schools.

Apart from teaching the same subjects, Catholic school teachers are also expected to support their students’ spiritual life, offering a strong example and transmitting lessons that go beyond academics.

“Public schools don’t teach religion and that’s the difference,” said Reynald Ventura, who went to St. Jane Frances as a child and is now in his first year of teaching first-graders there. “It becomes the basis of how we teach.”

Because Catholic schools ask teachers to do more — and often with fewer resources — schools like St. Jane Frances look for candidates who are innovative, teachers who are “not just going to teach from the textbook, and that’s it,” Giron said.

In other words, someone who “considers their job a mission,” added the principal.

That standard was tested during the initial COVID-19 shutdown that forced teachers to quickly pivot to remote learning. Teachers made themselves available after school hours. Some dropped learning packets at students’ homes when their parents couldn’t pick them up.

“It was ‘Anything you need, we’re available at all hours,’ ” said Nerkins, who also serves as vice principal at the school. “I had students emailing me at eight at night, asking me questions about homework. I’d answer their questions and then tell them it was late, stop working.”

Perhaps that show of commitment is connected to the school’s COVID-19 enrollment spike, Nerkins wonders.

“Quite a few parents approached me and said how happy they were with how we handled things,” she said. “Those parents told all their friends about it and the friends were saying, ‘That’s not how it is at my kid’s school.’ I think that’s how word spread about what we’re doing here, and I think it’s why a lot of people wanted to send their kids here.” 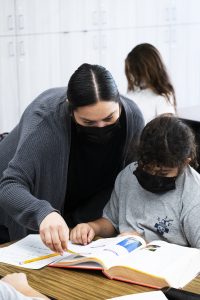 Like so many before her, Giron first handled the plumbing problems with patches, doing whatever necessary to get through that day. But when the middle-schoolers began to complain about the restrooms, Giron knew she had to look for long-term solutions. Her first problem was, she didn’t have the money to make them.

So Giron began looking outside the school for help. She found two nonprofit organizations dedicated to helping Catholic schools, the Shea and Smet foundations.

“They came in and they handled everything,” Giron said, before correcting herself: “Well, not everything. I remember I showed them all the items on the dream list and they said, ‘Umm, no.’ ”

But, together, working in concert with Giron, the grant money brought new classroom equipment and, instead of patches, problems got more permanent fixes. Those middle-school restrooms are now something to be shown off. A part of the school once used for storage was remodeled into an auditorium that now hosts performances of all stripes.

The facelift was certainly welcomed by teachers. But getting students excited to return last fall to a virtually new(ish) campus was a feat of its own.

“You could see in their faces how happy they were to be here, how much they loved the changes,” recalled Giron. “It was so joyous!”

Giron said that getting the school finances in order, and being open to asking for assistance from outside partners, has allowed the school to thrive while helping it focus more on what is important. Mindful that she is charged with forming the hearts and minds of the school’s students, she knows that doing so is much better if things are in order with the bricks and mortar.

“To focus on academics, we had to put our financials in order, had to get our facilities in order, so now it’s not some everyday thing we have to deal with because something has broken. Now, we are able to focus on our kids and our school community.”