Even amid pandemic, LA Catholics making sure Census goes on

Priests, parishes, and faith-based organizations in the Los Angeles area were planning to use the days and weeks before April 1 to put the U.S. census on the collective radar of their communities.

Then, almost out of nowhere came a worldwide emergency prompted by the rapid spread of the coronavirus (COVID-19), prompting the Archdiocese of Los Angeles on March 16 to suspend public Masses until at least March 29.

But that has not stopped the census, or the need to get people to participate, said Isaac Cuevas, director of Immigration and Public Affairs for the archdiocese. For the foreseeable future, the battle will move online.

“Right now we are in the process of building a digital ministry so that we can continue the work of our Church,” said Cuevas, who hopes that the emergency will not stop people from taking the simple steps to participate in the census.

“Since everyone is being encouraged to be at home, it is more important that people complete the census early and digitally to avoid the need for enumerators knocking on doors,” Cuevas told Angelus.

The “digital ministry” is expected to be up and running before the end of March, Cuevas said.

The 2020 census officially began on March 12, when a majority of households across the country started receiving the first wave of letters or notices with instructions on how to fill out the nine-question survey online.

Anxiety among some communities, particularly ones with immigrants, about giving the government information, has required a concerted effort by trusted institutions to stress the importance, and the safety, of getting counted.

Here in Los Angeles, this includes the Catholic Church.

In a recent message to local parishes, the archdiocese’s Office of Life, Justice and Peace explained that “it’s important for everyone to participate in the census, including everyone in our immigrant communities who may not have been counted in the past census.

“We want your help in mobilizing your community to participate and be counted in 2020,” the parishes were told.

The archdiocese has so far taken a proactive approach, identifying the parishes that sit in the so-called “hard to count” areas of Los Angeles and sending resources and materials about the importance of census participation.

The fact that the message to participate in the census is still on the radar, in spite of the overall health emergency, speaks to the importance of a complete count. 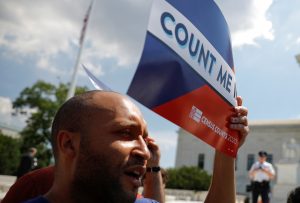 A protester holds a sign outside the U.S. Supreme Court June 27, 2019, after the court ruled on adding a citizenship question to the 2020 census. (Carlos Barria/Reuters via Catholic News Service)

Before the cancellation of public Masses, Father Brendan Busse, SJ, had been stressing in Mass homilies to parishioners at Dolores Mission Church in Boyle Heights the importance of telling the truth. For the priest, in this case, that preaching about that moral imperative included an invitation to fully participate in the upcoming U.S. population census and “be truthful about what our community is.”

“Spiritually and theologically, we take seriously that the truth is important, that we can only do the good if we know the truth. As a society, we have to put the right amount of money into our schools, public programs, services for seniors, safety in our streets,” Father Busse told Angelus. “If you have 40 people on a street, and only 20 fill out the census, we know that they will be getting half of the resources they need.”

Knowing that many in his community of immigrants and working-class households are unsure or even afraid about the consequences of sharing personal information with the government, the priest has been talking to people about the many reasons that Catholics can find in their own faith to support the decennial (every 10 years) federal initiative.

“At Dolores Mission we have always recognized the dignity of all people, no matter where they come from,” he said. “It’s another way to say that everybody matters, no matter who you are, one ethnic group or another; whether you are documented or undocumented, everyone counts.”

Father Busse and many other Catholic leaders in the Los Angeles area are aware of the crucial importance of this 2020 census, and the risk of having a serious undercount in the communities that need to be counted the most.

Small children of color are the most vulnerable to an undercount. According to the National Association of Latino Elected Officials (NALEO), 4.6% of children ages 0-4 were missed by the last census, conducted in 2010. That’s about 2 million kids not counted or miscounted. For Latino children the rate was 7.5%, for black children 6.3%, and for white children 2.7%.

In the face of the coronavirus pandemic, the census is rethinking its strategy around the second phase of the count, which includes in-person counts by enumerators, particularly in minority communities, students on college campuses, seniors in assisted-living facilities, and others at high risk for infection, and also, most vulnerable to a census undercount. 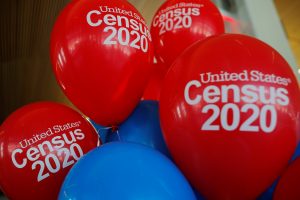 Balloons decorate an event for community activists and local government leaders to mark the one-year-out launch of the 2020 census efforts in Boston April 1, 2019. (Brian Snyder/Reuters via Catholic News Service)

The close ties between churches and their communities can help them to continue to be a trusted messenger in the middle of this crisis. Before the calls for isolation hit, dozens of Los Angeles parishes and faith organizations like LA Voice and PICO (Faith in Action) had been mobilizing to educate and inspire the communities they serve to “stand up” and be counted. Across the country, the USCCB’s Justice for Immigrants campaign is also raising awareness among immigrant communities, with information about the importance of being counted available in English and Spanish.

Cuevas himself has offered a number of 30-minute presentations to parish leaders and others.

“We have been communicating a two-part message; one targets the community that may have never filled out the census before or for whom it might not be clear why it is important to them. We explain it and we also make sure to let them know that their information is secure by law,” he explained. “Parish leadership and ministers must accompany recent immigrants, who are new to this process, to be counted for the good of all.”

At St. John the Baptist Church in Baldwin Park, Father Mike Gutierrez has been working alongside faith-based community organizers from LA Voice and doing outreach in the community, which will now potentially move to the online platform.

“We make sure to tell them that the more accurately they are counted, the more funding and resources our communities will get,” said Father Gutierrez.

The parish has partnered with LA Voice, a multifaith organization working to help communities meet their own needs. Census organizer Chapman “Chap” Clark explained that their organizers have been working inside the parishes and in the neighborhoods “not only to train folks about those issues they care about, but connecting them to resources and empower those communities to make sure they get more access.”

Clark says the organization’s goal is to ensure “100% congregational membership” in the census.

“Many parishes are already doing this outreach and we want to equip them to do the work.”

The most powerful tool in their box, he believes, are family and friends.

“This is based on research: We know family and friends are the most trusted messengers in terms of participation and breaking through fear and mistrust.”