A mission that unites Hollywood and Rome

In early December 2019, Italian media headlines reported that the “pope’s dream” of a church open 24/7 for the poor in the center of Rome had come true this Christmas.

In a letter read at the Mass, Pope Francis praised the project as “a haven in which to find a welcome and from which to return to the face of the wonderful adventure of Christian vocation.” He went on to say that he “wished that the doors of the house of God are always open because it walks among the peoples.”

As I read the news, I was struck by the similarities between Rome and Los Angeles. One article quoted a “Padre Ángel” García, founder of the Spanish Catholic NGO Mensajeros de la Paz (which operates the new church) as stating there are more people sleeping on the streets of Rome than anyplace else in the world. Here in Los Angeles, we are made aware daily of the crisis of homelessness that has left more than 58,000 people unhoused.

But Pope Francis continues to invite us to reimagine the Church not as a museum, but as a refuge for the weakest. “Pope Francis always says that he would like to have a poor church for the poor,” García said. “This project is just that.”

As I read these words, I could not have felt more proud of the Urban Sanctuary, located on the Jesuit campus at the nearly 100-year-old Blessed Sacrament Church in the heart of Hollywood. It is the church in which I was ordained a priest, but at the time I could not have imagined it would become a refuge for the most vulnerable people living on the periphery in Hollywood through something like the Urban Sanctuary.

The Urban Sanctuary provides a safe environment for respite, spiritual rejuvenation, and wellness for the Hollywood community, both for the unhoused and the housed. The hospitality at the Urban Sanctuary is experienced from the moment you enter the church.

There you will find a welcoming staff that oversees and provides a safe, peaceful, and meditative environment outside where the community in Hollywood can rest, restore, and renew.

As I walk through the Urban Sanctuary, I am immediately struck with the diversity of the Hollywood community: volunteers ranging from retired parishioners to Hollywood celebrities, to people living on the streets of Hollywood; a diversity ranging from young adults coming to be discovered, to an 80-year-old woman who could no longer afford her rent and lost her apartment.

As one enters this diverse oasis from the commotion of Sunset Blvd., it feels as if you can almost scoop Jesus out of the air.

Pope Francis has encouraged us to re-imagine the Church as “a field hospital for the wounded.” Father Antonio Spadaro, SJ, suggests, “It is a term that triggers the imagination, forcing us to rethink our identity, mission, and our life together as disciples of Jesus Christ.” I think the Urban Sanctuary has done precisely this.

The Society of Jesus’ General Congregation 36, which was convoked in October 2016, invited the Jesuits to “row out into deeper waters,” but at the time I doubt everyone understood the adventure we were embarking on with our new pontiff, Pope Francis.

This 83-year-old pope’s best Christmas gift this year was a church in the Eternal City for “the most vulnerable and marginalized where they can relax, shower, receive clothes and blankets or wash their own, get medical/psychological/spiritual attention, and even connect to the internet seven days a week.” 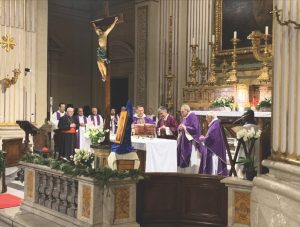 The church of the Holy Stigmata of St. Francis, open 24/7 for the poor in Rome, was opened with a Mass presided by Auxiliary Bishop Gianpiero Palmieri Dec. 9. (Mensajeros de Paz)

My own Christmas came early this year after a meeting with Archbishop José H. Gomez, when I was given an opportunity to describe the work of the Urban Sanctuary and explain how we are working to end isolation and homelessness on the Blessed Sacrament campus.

At the end of the meeting, Archbishop Gomez validated not only my parking ticket but the work we were doing as a Jesuit parish toward this end. I left that meeting with an even greater appreciation for Archbishop Gomez’s support and heart for the poor.

More than once in my preaching, I have shared that I feel like the most fortunate Jesuit in the world to get to do the work I do on the Blessed Sacrament campus. As a clinical psychologist and a Jesuit priest, I am aware of the tremendous importance of exemplars in our life.

As we begin the New Year, I cannot think of a better exemplar than Pope Francis, who invites us to imagine a church for the poor open 24/7. While we are not quite there yet at the Urban Sanctuary at Blessed Sacrament, I believe with all my heart we are moving in the right direction.

Pope Francis begs the Church to engage in a missionary thrust and to not get bogged down in self-preservation. In this spirit, and in the spirit of St. Ignatius, I invite all LA Catholics to join us at the Urban Sanctuary to continue to “set the world on fire” by providing a space in Hollywood for the whole community to rest, restore, and renew through the secret recipe of radical hospitality and community rooted firmly in the values of the gospel.

Father Frank Buckley, SJ, is a clinical psychologist, and clinical director of the Center at Blessed Sacrament Church in Hollywood. To learn more about the Center, visit TheCenterInHollywood.org.